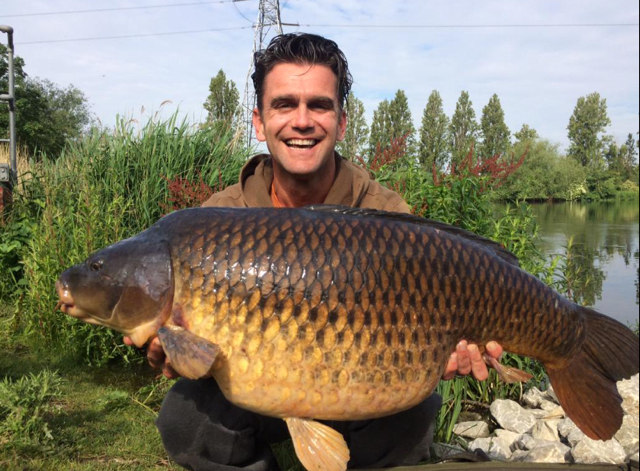 Actor Scott Maslen set hearts a-flutter for over eight years in some of British TV’s best-loved soap operas, and then surprised us with his dancing and cooking skills!

Scott’s profession is acting, but his passion is fishing. “I’m obsessive, compulsive,” he says, “Actually I call it Carp Fishing Disorder, because I try to go fishing every spare moment.”

Best known for his portrayal as DS Phil Hunter in ITV’s The Bill and Jack Branning on the BBC’s flagship soap EastEnders, Scott also took part in the 2010 series of Strictly Come Dancing and the 2015 series of Celebrity MasterChef.

His fishing passion began “when I was three or four. Our grandfather used to take us on caravanning holidays. Living on a council estate in Woolwich, you don’t see much green. I was fascinated by the water and the fish.”

Scott fishes “all over London”, but one of his favourite spots is the group of five reservoirs in Walthamstow. Caught any big ones lately? “In July I caught a carp there weighing 41.15 lb.” Now that is a lot of fish, but actually Scott doesn’t eat them. “I catch and throw back.”

A vegetarian since the age of eighteen, Scott does not eat meat or fish, and his teenage son Zac is also a life-long vegetarian. Does Zac fish? “Well, carp fishing is sedentary. Sometimes you wait for days to catch a fish: it’s about observation and watercraft. I think this was a bit too boring for the young lad, and it turned him off. Well, that means I get to go on my own,” Scott says with a laugh.

Scott signed up for the Royal Marines at the age of sixteen, but was injured during training. Unable to pursue his dream, he went to Miami and began a career as an international model. Five years later, he returned to London to study acting.

After training at the Guildhall School of Music and Drama, Scott landed a role in 2000 in the successful television series Lock, Stock…. A few more television and film roles followed, and then the big breakthrough came in 2002 when he joined The Bill. He stayed with The Bill for five years until he switched to EastEnders in 2007, where he starred as character Jack Branning.

We talked on the phone while he walked his dog Chewy on Hampstead Heath. No ordinary dog, Chewy is a 100 lb Chesapeake Bay retriever with webbed feet. “They are designed to hunt ducks, so Chewy will often swim behind when I am out fishing in a boat.” I observed that that is one very big dog, and he told me that they were off on a two-and-a-half-hour walk over the Heath.

Clearly very fit, Scott’s natural talent for dancing won him many followers and lots of praise when he participated in the 2010 series of Strictly Come Dancing. Twice, he and his partner earned a perfect score of 10 from the judges.

This year he competed in Celebrity MasterChef and reached the final. One of his winning preparations was a salmon dish. “Well, I do cook fish for my wife, Estelle.”

And his advice on how to cook fish? “Keep it simple, a couple of knobs of butter, seasoning and into the pan or the oven.”

Oh, and a piece of good news for his Primrose Hill neighbours: “We got Chewy three years ago after we had a burglary, as the police told me thieves don’t go near places with big dogs. Our neighbours love him because Chewy gives a good bark if there are strangers around.”