Back to the Future – Ten Years in Primrose Hill… Primrose Hill is lucky to have one of the world’s top osteopathy, acupuncture and massage specialists right on its doorstep; and this year Garry Trainer marks a decade of helping back pain sufferers from his clinic in Princess Road. 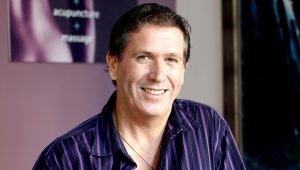 Garry, originally from New Zealand, has particular empathy for his clients after injuring his own back playing rugby whilst a teenager and spending three months in a spinal unit. This personal experience has led him to pursue a career spanning over 35 years devoted to helping others with all back-related problems. He talked to us about his journey. “Unlike today, there was a time when alternative therapies were not embraced by most people. But I found that one group was different to those in the entertainment industry, who had more open minds.

I began working with clients of the music promoter Barry Marshall, who were based in Utopia Studios (now Utopia Village) on Chalcot Road. They included luminaries such as Paul McCartney, Janet Jackson and George Michael. The music industry naturally led on to stage and screen, and I was retained by the Royal Shakespeare Company – a position I still hold today. So I decided to quit Harley Street and open a more locally focused clinic in Primrose Hill. I’ve always said that the best clinic is the closest one; and if it’s a good one, you’ve struck gold.

We have a rounded and holistic approach that combines massage,osteopathy and acupuncture. This way we can address the muscular, skeletal and nervous systems at once.”
The clinic has big plans for the future, including extending opening hours to cover evenings and weekends, and introducing Garry’s new preventative back care massage programme.

Finally, I asked Garry what feedback he had received over the years and if there was a special moment that stood out. “The best ever comment, from a high profile client who shall remain anonymous, was “far from *** fun, but it worked!”. And the special moment would have to be the time Derek Jacobi met Simon Callow on the spiral staircase as they arrived and left their appointments. The combined effect of two such incredible voices as they chatted was sheer bliss.”

Garry has asked me to thank Primrose Hill residents for their support over the past ten years, and he looks forward to the next ten in Princess Road.

As told to Phil Cowan