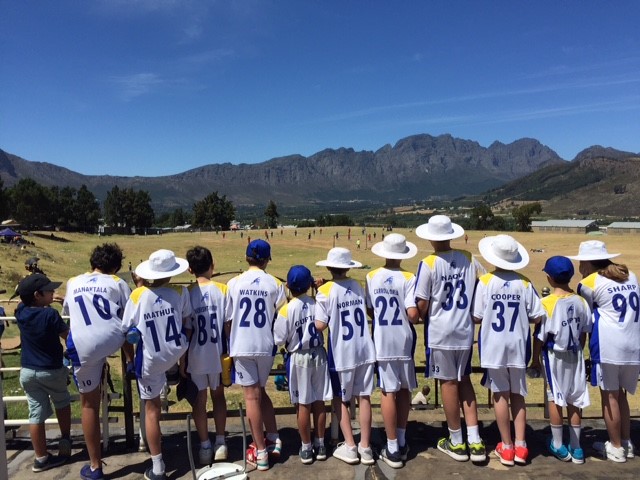 I should start this article with a confession: I am a cricket nut, and I also have great memories of Cape Town ‒ in fact my wife and I got engaged there in 2001.

So when our eleven-year-old son Elliott was selected for the Primrose Hill Cricket Club U12 tour in February, I could hardly say no. And it sounded spectacularly better than my own boyhood cricket tour experience ‒ three days of cricket and two nights of youth hostelling on the Isle of Wight. ‘Bat out of Hell’ was the song of that tour, blaring out of the school minibus radio. Forty years on, a lot has changed; and not just the musical choices on the bus (most of which I did not recognise).

Primrose Hill Cricket Club (PHCC) was founded in 2006 by Anthony Bouchier at least in part to provide his own children with quality cricket. The club has around four hundred boys and forty girls aged between 8 and 15, and they have a great record in providing boys and girls for borough and county cricket, with kids involved in Middlesex and Hertfordshire.

A PHCC Under-12 team has been touring the Western Cape every year for the last decade. We had eight fixtures arranged. Conditions were exacerbated by a water shortage, so our first game in Franschhoek was moved to a ground at the back of a brewery! A fine knock from Amaan Mathur was the highlight. Next stop was Paarl Boys Primary boys’ school, where the wicket looked like a thick rubber mat but was actually caked mud. No need to roll the pitch between innings. The groundsman used what looked like an industrial-sized hair-dryer to blow away grass and dust, and Tomas Carroll Orea hit a couple of sixes.

The next day we visited a township. As we listened to ‘Gracelands’ on the coach ‒ at last, some songs I recognized! ‒ I reflected that our tour would not have been possible thirty years ago.

What was in store for us, I thought, as I applied the sun cream on the bus? We had a healthy cheque to present to the community and a dozen kit bags of mostly ‘pre-loved’ clothing looking for a good home.

Arrival in the township

On our arrival we were shepherded into the Community Centre sports hall to the sounds of gospel singing from the nearby church. We learnt that the township layout was a legacy of the fifty-year apartheid policy, so we’d see deterioration in the quality of housing as we went up the hill. What we witnessed was a life lesson to us all: smiling and waving kids in some pretty basic conditions, and a family inviting us into their sparse home, which was remarkably clean and tidy. Everything was recycled, from containers and old caravans, to bedsteads and garden spades. Families queued to collect water from a single tap, yet they smiled and waved, especially one boy in an orange and blue striped top, who followed us around for the full ninety-minute walk. A living example of making the most of what you have.

There are high rates of unemployment, and a drugs epidemic. Tik is the drug of choice ‒ crystal meth to you and me. It’s highly addictive and has almost immediate long-term psychological side effects. Education at least remains highly valued, with students staying at school well into their 20s if need be to pass their exams.

PHCC took on a local team of U12s, where we narrowly lost. At the presentation we learned that the money raised last year had funded a new sound system and cricket coaches. As we handed a cheque for 80,000 Rand (£5,000), all our kids could understand what their raffle ticket endeavours, doubled by the generosity of Santander, was going towards.

At Somerset College we had an opening stand of 69 between Jai Gupta and Elliott Watkins, a pleasure to watch, especially when one of them is your son! We also came across our first girl opponent on the tour. She was thrilled to see Jasmine Sharp from our side. Jasmine comes from a cricketing family, and was one of the stand-out bowlers of the tour.

The next fixture was in a tough part of town, the Cape Town flats. Barney Norman and Kit Taylor helped us to a respectable tie, and the Belhar boys danced with delight at the rain and the football shirts we had brought them.

At Kenridge, Hamish Cooper scored the only 50 on our tour; and at Bishop’s Prep, Barney Norman was our leading wicket-taker. This game saw Jai Gupta lead the way, and his younger brother Neel was rarely out of the action. Max Leof bowled well at Hermanus, assisted by Danyal Naqvi, Rahul Vashisht-Pigem and Kabir Manaktala, to name but three.

The highlight of the trip was taking the ferry to Robben Island, where Nelson Mandela and so many others were imprisoned in the apartheid era. Our guide was imprisoned there for five years following his part in the Soweto riots, and I will never forget his message of the importance of forgiveness.

We all gained so much from this trip, and not just about cricket.

If you know a boy or girl between the ages of 7 and 15 who’d like to play cricket this summer, please contact [email protected]