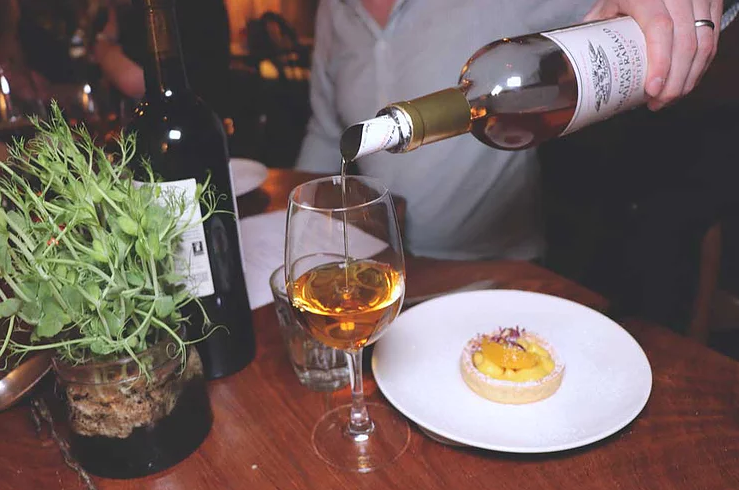 Remember the bottles of Riesling and Gewurztraminer we used to drink in the 1970s and 80s? Did people drink Blue Nun in Primrose Hill? Probably not, but we certainly did in Yorkshire.

After sampling a wine dinner in La Ferme, I can happily say that these wines need revisiting with fresh eyes. Obviously not the Blue Nun, but the Alsatian wines are serious contenders.

The new French restaurant on Regent’s Park Road, La Ferme, has started to run wine dinners on a monthly basis. Mike Turner, one of the owners, hosted the first dinner. He’s in charge of the wine list (and the DIY) in the restaurant.

Jolene Hunter of Zind Humbrecht in Alsace introduced the wines as they were served alongside classic French dishes cooked by Head Chef Guillaume Dunos.
Alsace is the driest area of Europe and it produces a variety of wines. The aperitif was Deutz Brut Classic NV, followed by Riesling Turckheim 2016 to go with the fish course of salmon trout.

Pinot Gris Rangen de Thann Clos Saint Urbain Grand Cru 2013 is a wine which makes the mouth water with its slight acidity, so it pairs well with fattier foods.
Pan-fried chicken ‒ with particularly good peas – was paired with a Riesling Brand Grand Cru 2015. This wine is made from riper fruits, is hotter and, to quote Jolene, ‘whistle-sharp’.

My favourite was Gewurztraminer Hengst Grand Cru 2013 which was served with Camembert. It was a far more sophisticated affair than I remember from my teenage Gewurztraminer tipples. It was however my favourite wine when I was thirteen, so perhaps I just had good taste. Jolene described this one as smoke meets leather – don’t you love wine descriptions!

The final offering of the evening was tarte au citron with Gewurztraminer Herrenweg de Turckheim Vielles Vendange Tardive 2011. Vendange tardive means ‘late harvest’. The grapes are riper so there’s more sugar and it’s usually served as a dessert wine, bringing a certain complexity. Because this wine is more concentrated, it’s only produced in a good year. Jolene’s description? ‘Sweet, rich and unctuous’.