The Spark Grows to a Flame that can Change Everything

You see loads of people down there at the Roundhouse. They were queuing up King Henry’s Road for Bob Dylan. And they were up all night for that lot Radiohead. And that wasn’t for tickets. That was so they could be right at the front. And kids! There’s always kids. No idea what they’re doing. The story goes that when they built that place the designers got it wrong and it was only used to turn round engines for ten years because someone decided to make the engines longer. From what I can see the railway planners aren’t doing much better now.

Ah yes, Radiohead. Someone tweeted that two years ago he had a spare ticket. He could have got a couple of thousand pounds for it but he decided to give it to someone deserving. The tweet goes on, “I came back last night to see Thom Yorke with the same woman. She is now my wife.”

The person responsible for that marriage is Marcus Davey, Chief Executive and Artistic Director of the Roundhouse. He has been there for nineteen years and it is only his third job. “I was studying for a degree in composition and music in society at Dartington. It was the forerunner of all those community music projects that are commonplace now. I went into schools, hospitals, community settings. One group was for people with learning difficulties. They had nothing. No money. No instruments. So I organised a 72-hour concert over a May bank holiday: 98 different acts. We raised double the money we hoped for. I was totally hooked. I was working with young people for a cause. I was nineteen years old.”

The method was simple. Marcus had a chart with seventy-two boxes and he filled them in with tutors and students signing up to take part. So with that success under his belt he graduated aged twenty. And within months he was the manager of the Dartington International Summer School. In January next year he will have been in arts administration for thirty years. Marcus has come a long way from the rented flat where he and his two brothers lived with his school-teacher parents, first in Malvern, then in Cumbria. From the age of nine he learned to play the cello, and when he was fourteen he organised his first concert with a pianist friend.

After Dartington, Marcus became Artistic Director and Chief Executive of the Norwich Arts Festival, the oldest festival in England after the Three Choirs Festival. It has been going continuously since 1772 and, unlike the Three Choirs, it takes place in a single city. And then nineteen years ago Marcus came to the Roundhouse.

“There was the Roundhouse itself. The rest wasn’t even a building site, it was just a redundant railway sidings. We had portaloos, really awful things, and we worked in little metal boxes. I first met Torquil Norman at my second interview. I came in and, listening to him talk about the project, I thought this guy is a genius. I couldn’t think of a better project anywhere in the world involving young people, performances and an amazing building. When I started we were working with the architects, fundraising – we had to raise 30 million pounds –  and designing the whole place. As we raised the money we started doing outreach. My first project was Markings with Camden primary schools, culminating in a show with hundreds of kids in a freezing Roundhouse. We did loads of stuff. We started building the summer programme. The first version of the choir started back in 1999. I don’t think I had any fear whatsoever. I was completely in love with the project.”

It took two years to rebuild the Roundhouse. It was on time and on budget and it was sound-proof. There were many objections from neighbours, especially about noise and the late alcohol licence. Marcus visited every objector personally. But in the end it came down to Camden Council, who were given a stark choice: “Either we get these permissions and licences or we do not open.” In the end some of the most vociferous objectors gave financial support because they could see that it worked and could see the positive effect it would have on young people. And they realised that the value of their houses had gone up.

[perfectpullquote align=”full” bordertop=”false” cite=”” link=”” color=”” class=”” size=””]In the end some of the most vociferous objectors gave financial support because they could see that it worked and could see the positive effect it would have on young people. And they realised that the value of their houses had gone up.[/perfectpullquote]

“I divide my time in lots of different ways. Some of it is a bit like being a football manager: scouting. Some of that is done by me, some of it by colleagues. Music is a very important part of the annual calendar, with many of the gigs presented by promoters and the music festivals by us.”

The range of events over the years is impressive: installations and performance projects with Conrad Shawcross, Penny Woolcock, Wayne McGregor and Ron Arad; collaborations with the Royal Opera and Ballet, the RSC and the BBC; host venue for the Apple Music Festival; In the Round, a series of intimate concerts with artists such as Keeton Henson, Beth Orton, Chip, Orchestra Baobab and Ghetts; Roundhouse Rising, a festival of emerging music; The Last Word Festival, concluding with the Roundhouse Poetry Slam Final; the Roundhouse CircusFest; music acts ranging from Jay-Z to Blondie, Radiohead to Giggs; choir festivals; two weeks devoted to space exploration; Akram Khan’s dance company…

All immensely impressive, but at the heart of what the Roundhouse does is their work with young people. They ignite the spark that grows to a flame that can change everything. At the moment every year they work with 5,000 young people aged 11–25. But they are not stopping there. They have planning permission to add one more floor to ‘container-city’ behind the main building, and to build on the corner where at the moment there are advertising hoardings near to the circus mural.

[perfectpullquote align=”full” bordertop=”false” cite=”” link=”” color=”” class=”” size=””]The Roundhouse is a world leader in involving young people in decision-making. Two members of the board of trustees are young people. And there is a sixteen-strong youth advisory board[/perfectpullquote]

“Our big vision for the future is to go from 5,000 young people a year to 10,000. We will open a centre for digital and creative entrepreneurs that will provide opportunities for the under 30s to develop their creative business and employability skills. In our new centre they will have mentoring, working alongside musicians and musical experts. They will have desk space and weekly classes and workshops. The real aim is to get to those young people who would not normally be included in the creative industries. We want to reach people from the local housing estates and areas of multiple deprivation. We want to provide a pathway into a job. We are also setting up a youth leadership programme for these young people.”

The Roundhouse is a world leader in involving young people in decision-making. Two members of the board of trustees are young people. And there is a sixteen-strong youth advisory board that meets monthly. This is not tokenism. Young people are absolutely central. 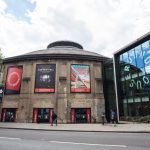 “This has a significant effect on the arts world. The Arts Council has just appointed its first young person onto their board. Tate Modern has its first young person on their board. The point here is that not only do they get a good experience of learning, they make connections with other young people. It’s not a case of trustees sitting round a table and talking about young people. It is working with and listening to young people.”
Only 8 per cent of funding for the Roundhouse is from public sources. The way that they fund the organisation is partly from ticket and bar sales, partly through fundraising and partly through hiring out the Roundhouse for events such as product launchs, private parties, award ceremonies or broadcasts. The search for funding is relentless, but Marcus keeps at it. Why?

“This job still fascinates me and inspires me every single day. My energy comes from talking to young people, seeing what the challenges are and marvelling at the amazing art they make. It drives the imagination all the time.”

Mole On The Hill