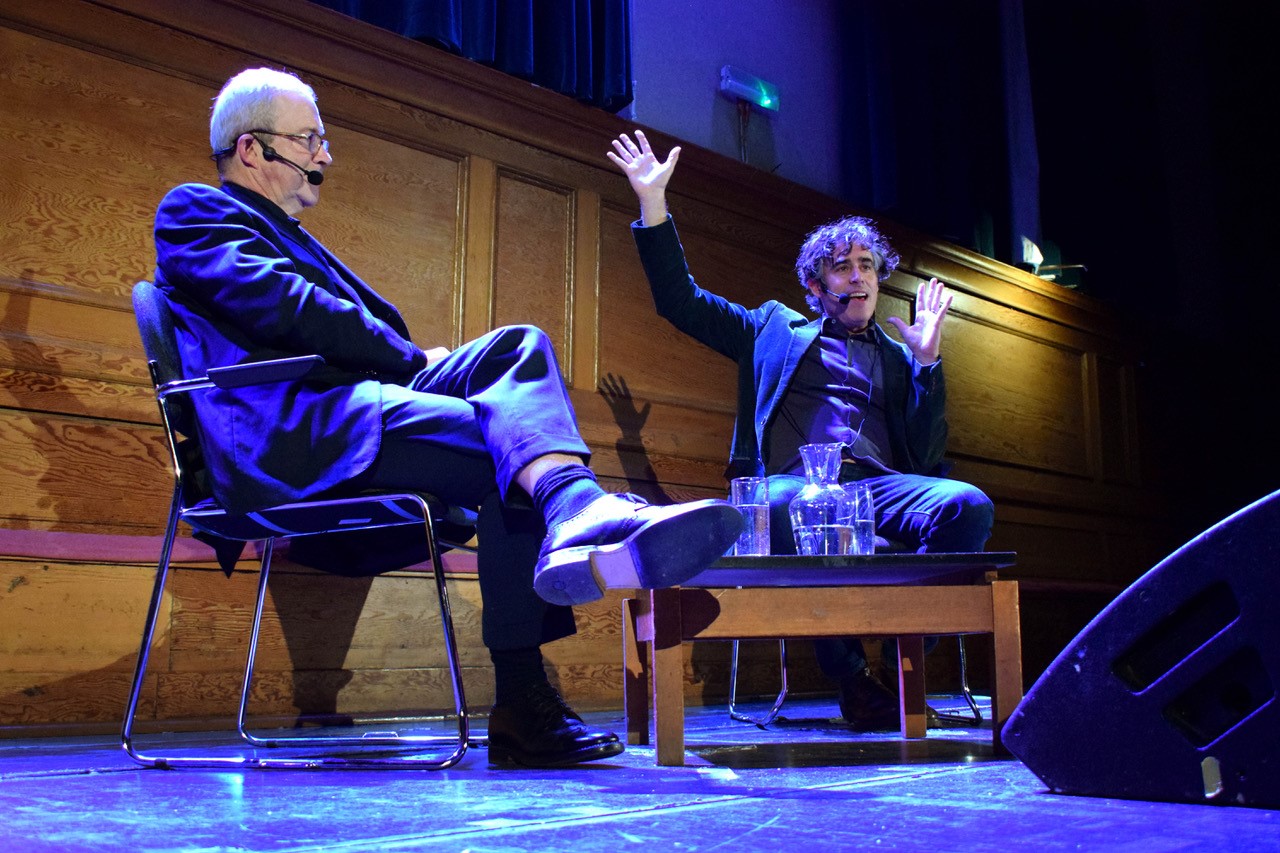 “Welcome to the Primrose Hill Brexit Means Brexit fundraising evening”… And so Stephen Mangan introduced the January evening event to raise money for the Primrose Hill Community Association. He and Harry Enfield were on stage at Cecil Sharp House in an unstructured, but brilliantly funny evening.

Both actors know Primrose Hill well. Harry Enfield lived here between 1988 and 2001. He lived on Gloucester Avenue near the photographer David Bailey. Bailey’s mail used to come through his door so he’d take it round for him, and often wonders if the favour was ever returned. Richard Beer and Helen Fielding were also close neighbours. He called Cecil Sharp House the ‘Clodhopping Society’ as all he could hear were feet thudding on floorboards. He acknowledges that Primrose Hill has changed and attracts different people these days. In his day, no one had a Bentley up in Hampstead: such cars were a sign you watched telly rather than read books; now everyone has them. He’s since moved to Notting Hill (boos from the audience) which he joked was much nicer and full of wealthier people.

Stephen Mangan moved to Primrose Hill in 1992 and still lives here (cheers from the audience). He’s lived all over, including Gloucester Avenue, Princess Road and Chalcot Square. He is a true local as his parents met in Camden Stores on Parkway, which is now Masala Zone. They had emigrated from Ireland and frequented the same pub. The Irish went to the Dublin Castle, the Scots to the Edinburgh Castle and the Welsh to the (then named) Pembroke Castle. The name Mangan means ‘luxurious growth of hair’. (Harry Enfield acknowledged he’d never be a Mangan.) In County Mayo where his family originated, everyone looks like him. And surprisingly, Mangan has never been asked to play an Irishman.

After touching on education, where we learned that Harry Enfield went to York University and Stephen Mangan to Cambridge (this was the source of a lot of pokes throughout the evening), the pair compared notes on working styles. Harry Enfield said he wasn’t good at being himself and how he felt the need to play someone totally different from his own character. “I’m a w***ker” being his reason. He envied Stephen Mangan’s confidence in himself. Mangan replied that he’d gone to boarding school, which taught you how to pretend to be confident. He then went to RADA and studied the Stanislavski method of acting, which trained him to enter into the mindset of his characters.

Stephen Mangan very nearly didn’t become an actor. He studied law – at Cambridge, of course – and shortly after he’d finished his degree, his mother became ill. He spent months caring for her until she died. His mother was only 45 when she died and his grandmother 47, so this gave him a strong desire to change direction and go for what he really wanted in life. He auditioned for RADA and got a place.

Brexit, of course, entered the conversation. Harry Enfield told about the time he’d invited Nigel Farage onto his show in ironic mimicry of Ricky Gervais having David Bowie as a guest on Extras. Farage was professional, didn’t ask for payment and did the take in one go. At that time he wasn’t a major political player. But Enfield was mortified when he recently met him again after a comedy evening and Farage came bounding over like a long-lost friend – in front of lots of young, cool comedians.

There also touched on religion. Stephen Mangan was brought up as a Catholic and rose through the ranks to become altar boy, swinging incense from a silver chain. He’s now an atheist, but the pair discussed the prevalence of Christianity within the acting community. Many people think that Mangan is Jewish, and after he’d starred in the TV series Adrian Mole: The Cappuccino Years, he was asked by the Jewish Chronicle if they could run a feature on him; when he said great, but that he wasn’t actually Jewish, they retracted their offer.

Harry Enfield is the catchphrase king, and we were treated to him shouting “Loadsamoney”. People still go up to him and say, “I suppose you’ve got loadsamoney now, haven’t you?” Stephen Mangan revealed that he still gets “Dan!” shouted at him every single day, as a result of the scene in I’m Alan Partridge where he plays the kitchen salesman Dan Moody.

When I met the two actors before the event, they were considering how Primrose Hill could be made cooler. The solution was to put Alan Bennett on a plinth and have him available for questions 24 hours a day. My suggestion would be a second plinth with Harry Enfield and Stephen Mangan surrounded by bar stools, so we could go over whenever we needed a good laugh and banter. And to shout “Dan!”