Oh! You Pretty Things: The Art of Sophia Langmead 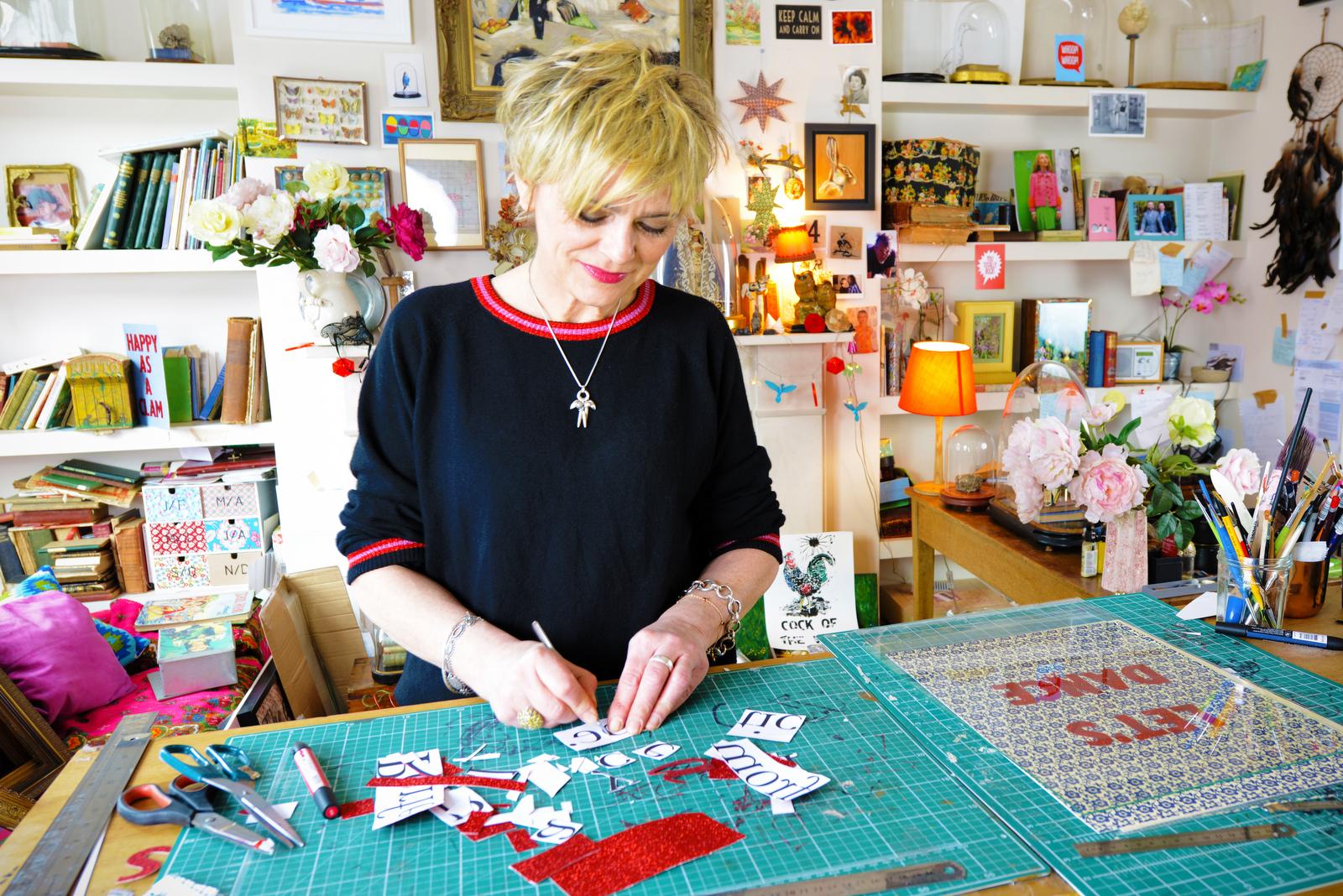 The day when On The Hill meets local artist Sophia Langmead at her studio in the heart of the village, the rain is constant and the wind turns umbrellas inside out. But once inside it is another world: a warm, friendly space filled with treasures. Sophia herself is open, easy to like and in possession of a kind of uncompromising honesty.

She creates dreamlike miniature worlds in bell jars which are truly extraordinary: delicate flowers, the petals of which are made of pages from old books of poetry; all the animals encountered over a lifetime of travel (giraffes, elephants, but also the tiny spiders in the earth below), commissioned by a husband as a present for his wife; a carousel complete with flying horses, decorated with ribbons and flowers all resting on a base of intricately folded pages from antique books.

Then there are the boxes: leaping deer; a fantasy landscape with cut-out figurines and notably the hearts; a series of works of mesmerising symmetry and beauty made from advertising proofs for match boxes. Sophia cites the American artist Joseph Cornell (1903–72) as an inspiration. His work of boxed assemblages created from the objects he found in antique shops and thrift stores gained him worldwide recognition, with the surrealist movement claiming him as one of their own. There are also echoes of Cornell’s work in pop art and installation art. Like Cornell, Sophia loves the unexpected juxtaposition of everyday objects, a parrot wearing a chic hat, for instance. “I like this sense of the absurd. I create fantasy worlds.” Every diminutive detail is painstakingly extracted with a scalpel, then folded, glued and mounted with wire. Here Sophia is in good company, as witnessed by the increasing popularity of miniatures in recent years, fuelled by the use of social media and a longing for calm and control in a chaotic world.

Nature is what inspires Sophia the most: flowers, insects, feathers. “About ten years ago I went to stay with my ex-boyfriend, Robert Plant, in the Welsh hills for the first time. I was convalescing from surgery, and staying there for a couple of weeks to get better. But I was so smitten by the wild beauty of the nature and landscape, the wildlife and the sometime bleakness that I couldn’t rest. I felt totally inspired and energised. I couldn’t stop making things, whether outside dragging slate all over the hills trying to build sculptures, or painting and drawing inside after it got dark, into the early hours of the morning. I feel that same energy and stimulation whenever I return there.”

The first work she created was ‘Spring’, a miniature world of spring flowers, tender leaves and birds in a box, created as a gift for Robert, who missed spring in the UK as he was always on tour. He introduced Sophia to the Green Man festival, which provided the inspiration for the pagan ‘Maypole’ jar. Making gifts for loved ones is something Sophia has done since childhood.

In addition to the work in bell jars and boxes, Sophia also creates pictures with messages such as ‘Now Wash Your Face’ and ‘The Drinks are on the House’. These have a totally different feel to her other work, being tongue-in-cheek, bordering on naughty. The messages are displayed on a background of patterned decorative paper which Sophia orders from traditional bookbinders. Some come in vintage frames. “I find the slightly ruder messages work better this way; it softens them somehow,” Sophia says of one of her best sellers, ‘For Fuck’s Sake’. The ‘saucy ladies’ often featured are from old 1920s advertising cuts and naughty French illustrations and, with the glitter lettering, they evoke the era of burlesque and . There is a repertoire of classic pictures always in stock, in addition to which Sophia also takes orders for bespoke designs. “Some couples or families have their own sayings that hold a special meaning for them, so it’s fun to have a picture made.” She herself often takes inspiration from songs for the words and lyrics on her pictures.

Some couples or families have their own sayings that hold a special meaning for them, so it’s fun to have a picture made.”

It is interesting comparing these racy pictures with the poetic purity of the boxes and bell jars: they are in complete contrast. She admits it can sometimes be challenging to combine the engrossing artistic process of making the bell jars with that of making the pictures, which are more commercially viable. As the bell jars and boxes are so labour-intensive and take a minimum of five weeks to complete, they are made on commission only, often as wedding presents or birthday gifts. After receiving a commission, Sophia first spends considerable time doing research. “I sometimes get completely enthralled by the subject.”

There is a definite Victorian aesthetic to Sophia’s work, especially the fascination with collecting and displaying objects. Sophia shows me a box displaying beautifully coloured seashells that she gathered on a beach in Wales. Another contains butterflies pinned neatly on the pages of an old botany book; but there is no taxidermy here. “They are not real, that would be too horrible. I cut out images of butterflies from vintage Observer’s books instead.”

Sophia trawls antique markets and shops for books, battered old boxes and other ephemera that can be incorporated into a work. Kempton Park is a firm favourite. She collects objects and saves them for later use. Nothing goes to waste; she tries to find a use for every part of her antique finds. “I like to give them a new life,” she says, showing me an example where the side of a box has been lined with old rulers. When a book is sourced, the cover and back are utilised as well as the pages. It is respectful of the object’s history.

Customers can view Sophia’s work on her eponymous website as well as her Instagram page. The latter, especially, is a practical way of accessing new clients: when a customer posts a picture of a purchase, the effect is instant, leading to more enquiries and often more orders. Sophia likes the immediacy of it, allowing her to come in direct contact with the customers.

Trained as an actress, Sophia first came to London at the age of 24. She worked in TV and theatre before becoming a full-time artist around four years ago. Primrose Hill has been a constant base; Sophia clearly feels at home among the many artists and creatives in the area, many of whom are owners of her work. Locally she likes going to Greenberry Café and Primrose Hill Books and she is excited that Sam’s Café is set to reopen in the early summer at new premises on Regent’s Park Road. She works on commissions for restaurants and hotels as well as private individuals. A mural of a French landscape was a focal point in local favourite L’Absinthe, now sadly closed. When it is time to leave and step into the real world again, I wish I could take a small piece of Sophia’s inspirational art with me. Perhaps we all have space in our lives for a perfect, miniature world.