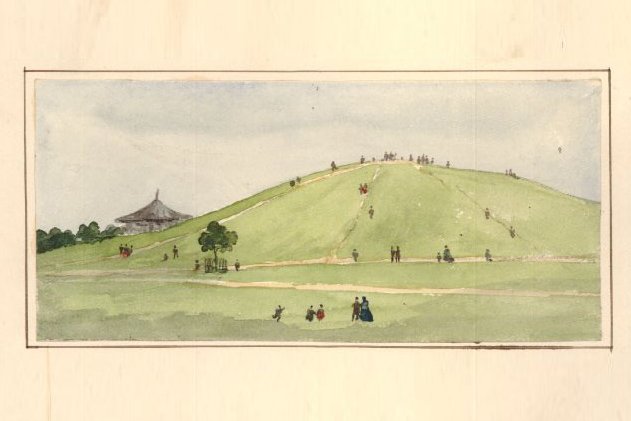 Primrose Hill has no tearoom, although Regent’s Park has five. But a new tearoom is now being built next to the playground…

This is not the first tearoom on Primrose Hill since it became a public park in 1842. There were indeed a series of tearooms on the hill over the next hundred years. The first was a modest kiosk, which had originally been part of the Great Exhibition of 1851. It was transferred to near Barrow Hill Reservoir when the Crystal Palace moved to Sydenham in 1852. A second tearoom, known as the Queen’s Pavilion, was built in 1859. This tearoom was, in turn, pulled down in 1905 and replaced by a new one, costing £679, in 1912. It had a ladies’ lavatory as part of it, with a separate gentlemen’s lavatory nearby. As with the previous tearooms it was sited near the corner of Barrow Hill Reservoir.

The fate of this tearoom, and the reason why there has been no tearoom on the hill for seventy-four years, was highly sensational. It might almost have come from the pen of HG Wells, who set the dénouement of his The War of the Worlds (1898) novel on Primrose Hill. At 11.40 am on 21 March 1945 – fortunately when the tearoom was shut – it was obliterated by a V-2 rocket. This left a hole 30 feet deep and 60 feet wide where it had once been. No one was killed, although three minor casualties were taken to a first-aid post in Bayham Street. The next day Mr ME Lefevre, of 37 Ormonde Terrace, reported to that post with pain in his ears and was sent for treatment to the Hospital of St John and St Elizabeth. Austerity after the war led to the rejection of a number of plans to enhance Primrose Hill, always, in any case, the Cinderella of the Royal Parks. This included the notion of reopening a tearoom on it.

The Primrose Hill V-2 was not quite the last one of the war. Six days later the final V-2 aimed at London landed in Kent, killing Mrs Ivy Millichamp at home in Kynaston Road, Orpington. In 1944 and 1945 three V-1s had fallen on the canal, King Henry’s Road and the Zoo. The V-1 that struck between King Henry’s Road and Oppidans Road in 1944 caused many deaths and resulted in the construction of Primrose Hill Court in 1951 to replace the many houses destroyed.

These V-2s (the name meaning Vergeltungswaffen or ‘retribution weapons’) were marvels of technology, fired from elusive mobile launchers; they could reach an altitude of 55 miles and a maximum speed of 3,850 miles per hour. No defence was possible to stop the 1,350 targeted at London from landing. British intelligence, however, fooled the Germans into thinking that a large number of their V-2s were overshooting London. This persuaded the Germans to recalibrate the rockets, resulting in many of them falling short of their mark.

Although occasional hits caused massed casualties, the average death toll from each V-2 was only two, while the cost of the project drained scarce German resources and had no effect on the outcome of the war.

During the Blitz, Primrose Hill had escaped relatively unscathed. An 1850 map of Primrose Hill was annotated by the park authorities to show where and what type of bombs fell there: it records four high-explosive bombs and two oil bombs on the hill. One bomb, in September 1940, injured some of those sheltering in one of the park trenches, as recorded by Charlotte Haldane. She usually played the piano in her drawing room at 54 Fitzroy Road to drown the noise of the guns on the top of the hill and to distract her mind during the raids. “On this occasion my husband insisted that I should accompany him to the shelter on the hill. No sooner had we arrived there than a small bomb fell on a section of it, which collapsed, injuring several people, and one old lady died of heart failure from the shock.”

In a raid on the Zoo, which destroyed the zebra and wild horse house in late 1940, a giraffe “died of a dilated heart due to over-exertion caused by fright”. A zebra stallion also escaped along the Outer Circle, pursued by the distinguished scientist and Secretary of the Zoo, Julian Huxley, who succeeded in shepherding the animal back into the Zoo. “He was a Grevy zebra stallion, almost as large as a horse, and his nerves were naturally on edge. Every time the AA guns went off on Primrose Hill he backed violently. I was frankly alarmed that he would kick me.” However, Huxley was told by the zebra-keeper the next day, “Cor, bless you, sir, you needn’t have been frightened, ’e’s a biter, not a kicker.”