The History of Dogs on Primrose Hill 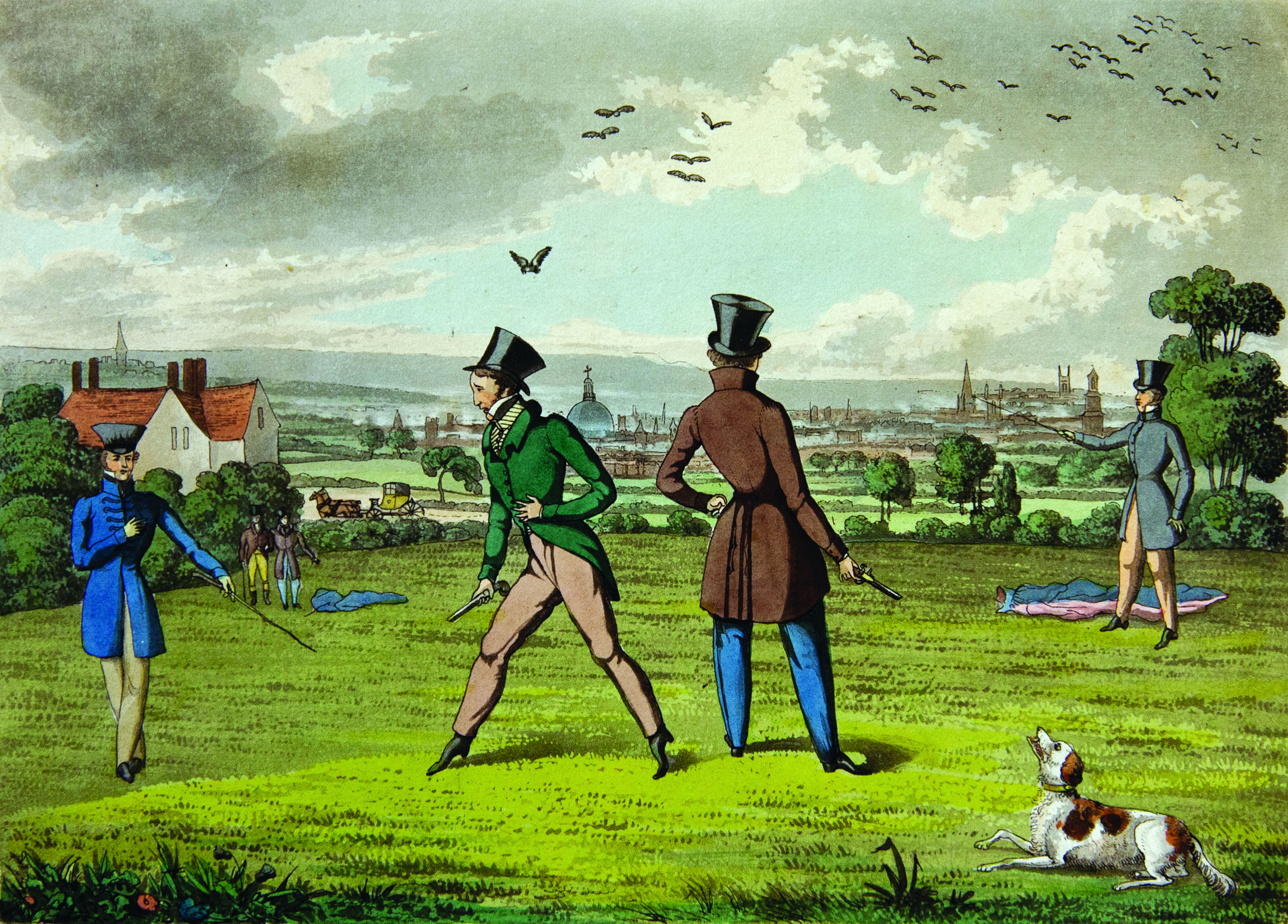 Since Primrose Hill became a public park in 1842 it has been enjoyed by millions of visitors. Some of the most frequent and regular of these have been dogs. While most canine visits have left no record, a number have done so. There are dogs in two early illustrations of Primrose Hill, with a dog on top of the hill in an engraving by Isaac Cruikshank in 1791; and a spaniel anxiously awaiting the result of a duel in DT Egerton’s The Trial of Nerves of 1824.

Not all visits by dogs to the hill ended happily. A case was heard at Bow Street in October 1789 of a spaniel stolen for its skin. John Burkett had been arrested after being seen dipping a bundle, in which was a warm dog’s skin, a halter, a bloody knife and a piece of liver, in one of the ponds then on Primrose Hill. Burkett ‘owned that he gained his living by dog-stealing, the skins of which he disposed of to a tanner in Long Lane, who gave him the money for them without asking him by what means he came by them; and that for the largest Newfoundland dog he could not get more than three shillings and sixpence’.

Dogs were also the cause of the most celebrated duel on Primrose Hill in April 1803. A scuffle in Hyde Park between two Newfoundland dogs belonging to Colonel Robert Montgomery and Captain James Macnamara RN led to a duel on the same day in which Macnamara shot Montgomery dead on the top of Primrose Hill.

The earliest set of rules for Primrose Hill Park, dating from 1871, specified that ‘No cattle, sheep or pigs are allowed to enter, except for pasturage’. They also insisted that dogs should be kept on leads, at least some of the time: “The persons in charge of dogs must prevent them from causing annoyance to any person, and from worrying or fighting with other dogs, or injuring or disturbing any animal in the park. No person shall take into or have in the park any dog not led by a chain or string, or other sufficient fastening, during such time as notices are exhibited, prohibiting the admission of dogs unless led.”

These rules also dealt with what was then a current threat: any dog brought into the park which may reasonably be suspected to be in a rabid state will be destroyed.

There is a charming vignette of the painter Ford Madox Brown (1821‒1893), who lived at 1 St Edmund’s Terrace at the end of his life: “He usually wore a shiny top-hat and a black cape, and he used to take my grandmother’s little dog out for a walk on Primrose Hill. He couldn’t walk very fast because he had the gout, but the little dog was very old and couldn’t go fast either, so it didn’t mind. He would stop from time to time to look behind to see if it was coming, and then it used to stop too, and sit down and look up at him, and hang its tongue out and wag its tail, and then they went on again.”

Sylvia Ballerini recalls a time in the 1930s when her dog, Bonzo, used to roll on the hill and bring back sheep’s droppings, at a time when sheep were still pastured on Primrose Hill. Now it is the mess left by dogs themselves that causes a problem, partly the result of a national increase in the keeping of dogs as pets. Toxocariasis, spread by roundworms in the faeces of dogs, can cause a variety of unpleasant symptoms in humans, particularly children. Dog urine causes grass burns.

Primrose Hill is linked by a dog to The Beatles. Paul McCartney wrote ‘The Fool on the Hill’ after climbing Primrose Hill at dawn with his Old English Sheepdog, Martha, and encountering an uncommunicative ‘middle-aged gentleman, very respectably dressed in a belted raincoat’, who appeared and vanished mysteriously.

Fictional dogs have also made their mark on the hill. Paul Charles set a number of his books in the area around Primrose Hill, home of his hero, Detective Inspector Christy Kennedy. In Last Boat to Camden Town (1998), Charles takes a swipe at Primrose Hill’s dogs. Sergeant Irvine reports:
“Sorry to be a bit late. I’ve been otherwise engaged up on Primrose Hill this morning … some nutter was sniping at dogs from the high-rise flats. He killed four of the pets before we managed to disarm him … Apparently, he was fed up going out for a walk on the hill every morning and ending up with dog-shit on his shoes.”

Eclipsing all other Primrose Hill dogs are the canine heroes of a famous children’s book which gives both Primrose Hill and dogs an important place in its plot. Dodie Smith, a highly successful playwright, published The Hundred and One Dalmatians in 1956. It tells the harrowing story of fifteen Dalmatian puppies stolen from a house in Regent’s Park to make fur coats for the demonic, and diabolically named, Cruella de Vil.

Their rescue (with an additional eighty-three other kidnapped puppies) by Pongo, Missis and Perdita, three Dalmatians belonging to Mr and Mrs Dearly, is made possible by information gleaned from a network of dogs across England, activated by the Twilight Barking on Primrose Hill. Once they realise that the puppies have gone, Pongo and Missis have no hesitation: “From the first, it was quite clear the dogs knew just where they wanted to go. Very firmly, they led the way right across the park, across the road, and to the open space which is called Primrose Hill. This did not surprise the Dearlys as it had always been a favourite walk. What did surprise them was the way Pongo and Missis behaved when they got to the top of the hill. They stood side by side and barked.”

Pongo knows that Primrose Hill is the best place to send and receive information, as the reception in the rest of Regent’s Park is poor. The book was made into a film as 101 Dalmatians by Warner Brothers in 1963, although the plot and characters in the film vary from those in the book. Disney has recently announced a prequel to 101 Dalmatians, revealing the early life of Cruella de Vil. It is to be called Cruella and will be released in 2021.