The Foodbank in Primrose Hill 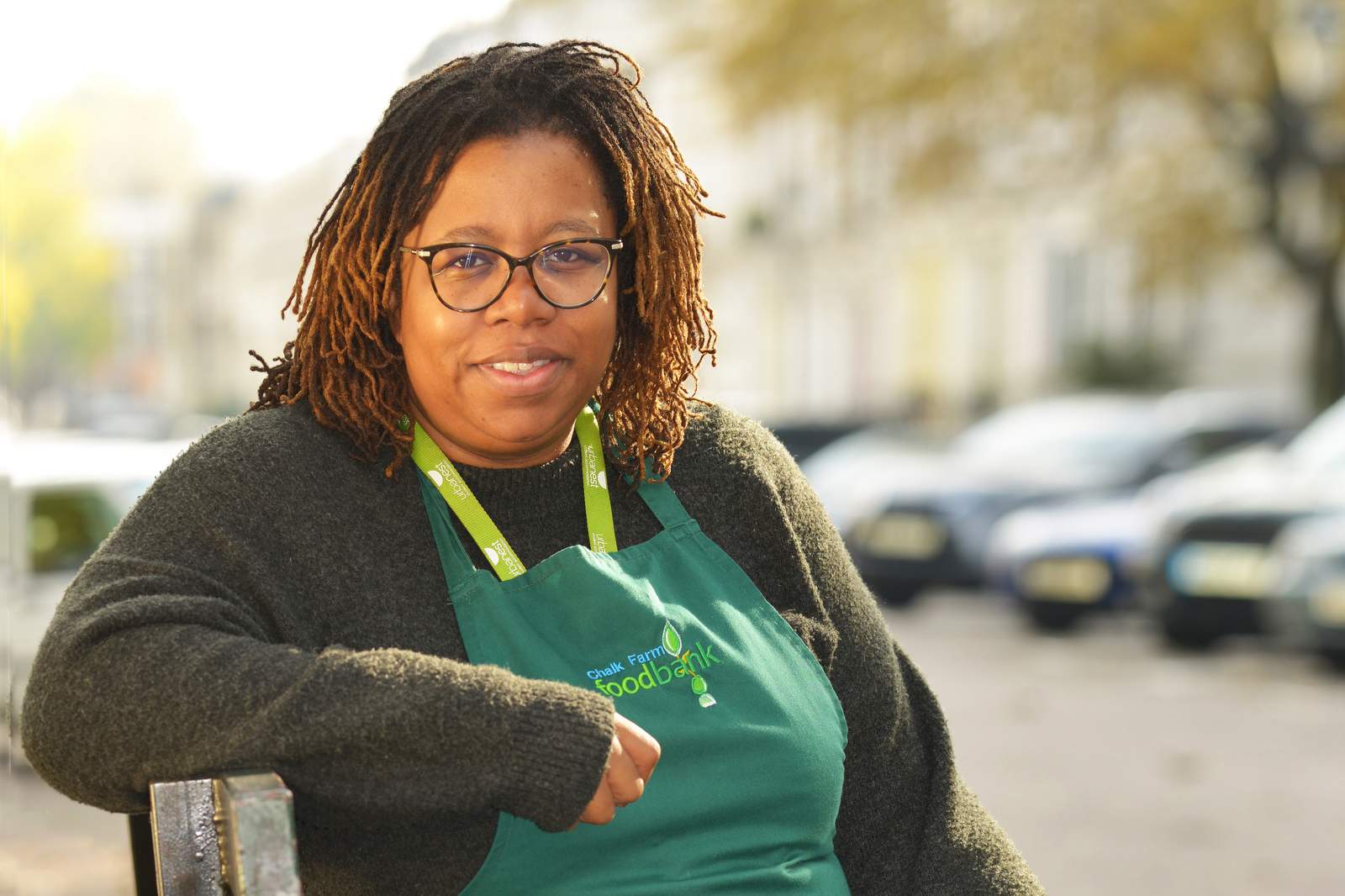 Adrienne McPherson is Manager of Chalk Farm Foodbank. She was born in Camden in 1986, and has lived there all her life except for university in Buckinghamshire and five years in Texas.
“I went to Texas to work, helping young people who were affected by gangs, poverty and expulsion from school. When I started there were five people in our group. When I left there were twenty. It’s still running and quite a lot of the young people have gone on to do similar work to what I did with them: working with charities, working overseas, working with other organisations. Those children were dealing with a lot: homelessness, family breakdown, stress and trauma. They were dropping out of school and committing crime. Our job was to help them get back into mainstream living and not end up back in jail or dead.”

On Adrienne’s return, she volunteered at the local foodbank which had opened in 2012, operating from Chalk Farm Baptist Church. The group made contact with the Trussell Trust, which today supports over 1,200 foodbank centres across the UK, providing emergency food and support to people locked in poverty, while also campaigning for change to end the need for foodbanks.

Carol and Paddy Henderson founded the Trussell Trust in 1997 based on a legacy left by Carol’s mother, Betty Trussell. Initially they focused on improving conditions for over sixty children sleeping at Central Railway Station in Bulgaria. But in 2000 Paddy received a call from a mother in Salisbury saying, “My children are going to bed hungry tonight – what are you going to do about it?” What Paddy did was start the Salisbury Foodbank in his garden shed and garage, providing three days of emergency food to local people in crisis.

That’s how it started; but how does Chalk Farm Foodbank operate today? Through grants and funding, Adrienne now has a paid position. Every Thursday morning there is a team of eight or nine volunteers preparing individual boxes for clients, and in the afternoon three or four other volunteers help to restock the shelves. The foodbank is hard graft. It is not for the faint-hearted. Adrienne says, “It really is blood, sweat and tears, packing, restocking, lifting.”

Trussell foodbanks are run according to a strict protocol. They are not drop-in centres for anyone who is needy. All clients must be referred by care professionals such as health visitors, school teachers and social workers, who identify people in crisis and issue them with a foodbank voucher. This means that people can receive a parcel of three days’ worth of nutritionally balanced, non-perishable food from the foodbank. When clients arrive at the foodbank they are greeted with courtesy and respect by a trained volunteer, who helps the client to determine what they need.

How many people use Chalk Farm Foodbank? Adrienne says, “I use the word ‘client’ because that word conveys something to people. They are local people with needs. When I talk to people, I call them my neighbours. They live in the community, and when I walk about the community I see them. On some days there might be five clients, on other days fifteen. Those are just five or fifteen people attending the foodbank. But on their referral voucher, it could say four people on this one voucher. The voucher tells us how many people we have to feed. So on an average Thursday, we will have fed between twenty and forty people.
“Our volunteers come from the community. What’s really great is that when our volunteers come here, they already have in mind that they want to be here. They are committed and dedicated about this. We see it throughout the whole session. The foodbank could not, would not, cannot run without our volunteers, who are passionate about what they are doing.”

The foodbank does not have any government subsidy. The Trussell Trust believes that organisations who take money from the council or the government can be compromised. It can backfire. For example, if people are coming to the foodbank regularly, the authorities might cut back on their benefits. Instead, whoever comes through the foodbank doors is treated with confidential respect.

I came into this job and role thinking, what more can we do? Can we be more than just a foodbank? And over the years we have become a little community.

Of course, Adrienne realises that Chalk Farm Foodbank is only scratching the surface. “I know this is the reality. I came into this job and role thinking, what more can we do? Can we be more than just a foodbank? And over the years we have become a little community. People can come by just to have a cup of tea. Quite a lot of people are lonely. We have people who have participated in our cookery course, learning how to cook on a budget. We see people who move on to get work. Of course, there are still people going hungry who we can’t reach. Some of that is to do with anxiety, some of it is mental health, some of it to do with physical mobility.
“I think it’s really sad that there are foodbanks. A lot of people are outraged by foodbanks, the idea of them, the fact that we have them, that we need them. To be honest, I don’t want to have a job running a foodbank. It’s not right in this day and age. But there never has been or ever will be a time when we don’t need some kind of organisation that supports people and feeds them and helps them out of poverty. I don’t think these outraged people think the poor should starve. They think that our country is one of the most powerful in the world and yet people are trapped in poverty. I think that is where the outrage comes from.”

Since 2014 Tesco have had an agreement with the Trussell Trust. They realised that their customers had a desire to help, so while people shop they are encouraged to pop a few extra items of much-needed food into their trolley. Tesco Finchley Central has been the foodbank’s main supporter, and from this year they have been joined by Swiss Cottage Tesco Express. The foodbank has to organise the collecting of donations every other week. They don’t have a van, but a church group has one, and they pick up items. The rest is collected by volunteers using their cars.

Adrienne says, “I don’t think foodbanks will ever be eradicated. When we meet people who are in crisis or trapped in poverty, we need to give them choice and opportunity. I’m hopeful. That’s to do with my faith. I believe in humanity. If someone is trapped like an animal, they’ll snap, they’ll bite, they’ll claw. If someone gets the space to think and breathe and is given opportunity, I think you will see a different kind of person.”

The foodbank celebrates with the volunteers a couple of times during the year: lunch, coffee or a drink. The volunteers say how they think things are going and what they think could be done better. And in that way they are helping to shape what the foodbank does. As a result of these discussions, two years ago the group decided to host a Christmas dinner.

Adrienne says, “We heard people saying they were stressed out. They were sad and worried, crying because they knew they couldn’t give presents to their children. They knew they wouldn’t be able to have a Christmas meal. We have people who are so desperate they think about going back into some really tricky situations in order to provide for their children. It breaks your heart. Somebody might have just come out of jail and they are thinking maybe I need to steal, or go back into a particular kind of work. In 2017 we hosted our first Christmas meal at the Salvation Army. We fed 85 people. We had food from the Princess of Wales and Flatiron, hampers, clothes, shoes. Our guests were able to choose clothes and things for their families for Christmas. It helped them celebrate Christmas, enjoy the holiday season and not go back into debt or crime because they thought that was their only option. The Christmas meal didn’t just give them practical things, but it gave them hope. A better choice for their future.”

Also, the foodbank is always in need of volunteers to do pick-ups, help with collections, ask people to donate specific items, restock the shelves in the afternoon and organise presents at Christmas. Please contact info@chalkfarm.foodbank.org.uk if you can help in any way.

Donations of money are welcome on: www.justgiving.com/ChalkFarmFoodbank

Beverly Hills Bakery in Primrose Hill have been donating cakes to the foodbank every week for four years. 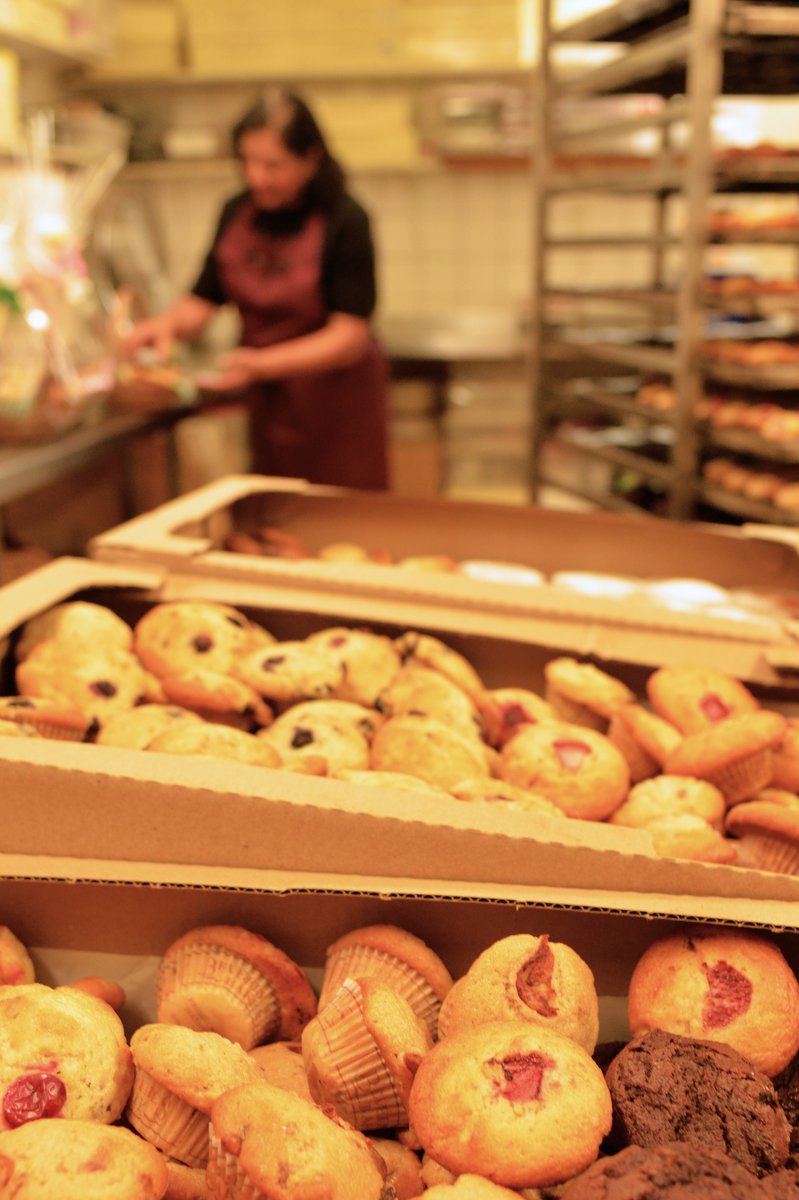 The owners, the Da Souza family, left Mozambique as refugees in 1973 shortly after the War of Independence. They lived in Denmark for ten years where Rosa became a very highly qualified patisserie chef. The family relocated to London in 1989, spotting a gap in the market for high-quality baked goods.

Today the bakery provides upmarket products which are available online or by telephone (see below). Their cakes have been to Buckingham Palace and enjoyed by a host of celebrities, as well as nearly all the prime ministers since the turn of the century, except Boris Johnson … yet.

The bakery has a variety of gorgeous gift baskets, cakes and pies for any occasion: Valentine’s Day, Christmas, birthdays, housewarmings, births or simply as a thank-you gift.

All this happens in the bakery in Primrose Hill Workshops. The family are very active in managing the staff and the business. They have ten employees and operate a streamlined and efficient business. In the run-up to Christmas, they go up to over thirty staff.
The company now supplies all the London postcodes in their vans, whilst the rest of the UK, Europe and North America are served, normally next day, by Fedex. “We have been in these premises for almost twenty years. Primrose Hill is an ideal location for us as it is just outside the congestion zone but central enough to serve our core business areas around the City, the West End and Knightsbridge, as well as the northern suburbs.”

Rosa says, “I think the foodbank is a wonderful cause for local people. It is outrageous that people have to resort to visiting a foodbank in the first place, but it is a vital service. Besides providing food and basic provisions, the foodbank offers a safe and accepting environment for people to come together. The volunteers who run it are absolute angels and we are delighted to contribute.”