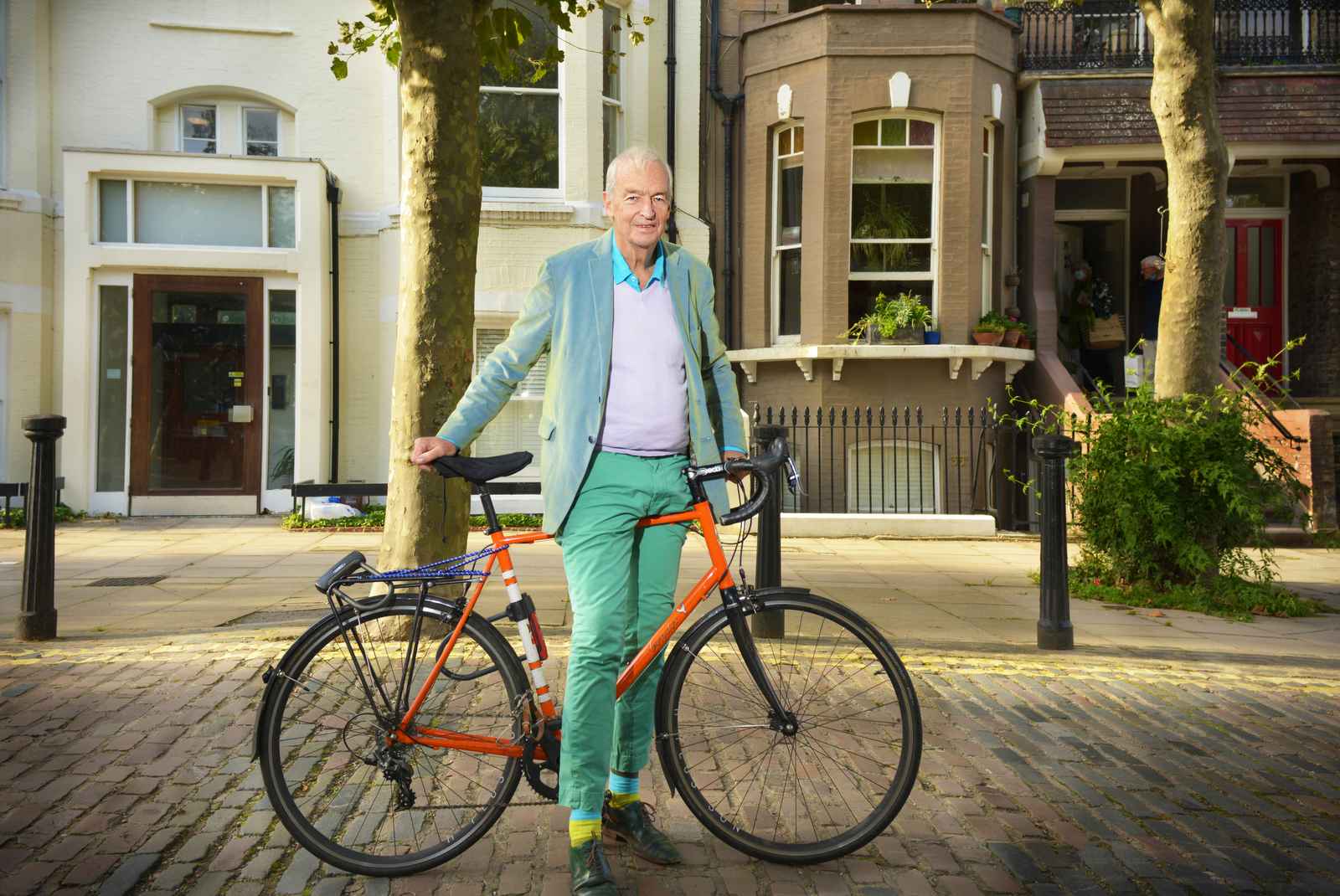 “I can’t believe you recognised me,” said Mr Snow, wearing a snazzy silk mask which, as he proceeded to show me, matched his colourful stripy socks. It was mid-July and I was in Primrose Hill on my way to have a haircut after four months of waiting. Well of course I was going to recognise an iconic television news anchor who, as it turned out, is friendly to strangers gushing about good journalism.

At the start of lockdown I decided to write a corona diary; so with the aim of keeping up to date with current events, I spent some time comparing all the different broadcast stations. Mostly it was Channel 4 News that won me over, despite it being an hour-long every weekday, because I like the in-depth, humane reports delivered by an enthusiastic team from different backgrounds. But especially the main presenter, Jon Snow, makes me feel I can trust him, that there’s nothing fake about this well-travelled and unassuming journalist.

After chancing upon him and suggesting an interview, he gave me his card and within days we had fixed a time. On a wet and breezy August morning, Jon Snow arrived by bicycle at Greenberry Café. We sat outside because it was a ‘meal deal’ Tuesday, which meant that inside was fully booked.

I began with a reliable conversation starter, “How was your lockdown?” Jon replied that it was ‘grim’. Going on to explain, he said that he missed the live interactions and spontaneous sharing of ideas with the big team that normally precede Channel 4’s nightly news programme. But he was impressed with the self-operating kit that has enabled him to use his home screen to see the person he’s remotely interviewing or the autocue in the studio ‒ a technological innovation that apparently didn’t exist until three years ago.

Jon Snow has been a newscaster for thirty-two years now, during which time young and old from across the political spectrum have come to respect him. Aged seventy-three, he’s actually in the category of ‘the most vulnerable’, although with his vitality and curiosity he appears much younger. Another reason I prefer Channel 4 News is because Jon Snow’s nature includes a sense of humour. As I cry easily when I witness other people’s pain, I appreciate how, despite the seriousness of global affairs, Mr Snow can still make us chuckle. Over coffees we turned to his daring and flamboyant tie collection – he now has around one hundred and fifty in striking colour combinations. During our meeting he got a text from the designer of his ties, asking if he’ll do a promotional video for her. “Will you?” I asked. “Sure” he replied.

Outside work, Jon is a patron of several worthwhile organisations ‒ Farms Not Factories and Trees for Cities, for instance. He has a particular interest in the arts, and spends time painting with watercolours in order to record views that he can then send as cards. “It’s a welcome relief from standing outside Number 10 shouting at Boris Johnson,” he grinned. He is much valued as a trustee for both the National Gallery and Tate. He showed me a painting saved on his phone called Lake Keitele, which he encouraged the National Gallery to take a chance on, describing it as ‘deep and spiritual’; it is now one of the museum’s best-selling postcards.

Back in his younger years, he was actually expelled from Liverpool University for taking part in an anti-apartheid student protest; more recently the university gave him an honorary doctorate, which settled the score. His first job was then to direct the New Horizon Youth Centre, helping homeless people in London. At around thirty years old he began working as a correspondent for ITN, and so began a career of reporting from dangerous hotspots like Nicaragua and El Salvador.
We talked about how today’s journalists “don’t have to trudge for miles in underdeveloped countries; more often local people are able to send pictures and videos to newsrooms”. Also because the public are taping significant moments on their smart phones, Jon hopes that this encourages some of those who would readily shoot their enemies to be a little more hesitant. He added that presently Channel 4 has someone in the Belarus demonstrations “filming discreetly”.

I recalled how earlier in the month MP Dawn Butler was stopped by the police in what she felt was a racial profiling incident and recorded it on her phone. Jon agreed that she had done a good job, though in the online world he felt that verbal violence was escalating. He has become more “circumspect” in his messaging, when he twitters out to nearly one and a half million followers.

“How do you deal with fame?” I asked, to which the highly recognisable presenter replied that when people stop him in the street “there’s usually a sensible and interesting reason”. But his cycling everywhere keeps things in perspective, because “you only have to get knocked about by the traffic to remember you’re a nobody”. Some years ago he declined an OBE, and when I asked him about that he laughed. “Become an Officer of the British Empire? End up being a knight or Commander? Why do we still have a British Empire? If I get on that rickety track I’ll end up deserting the human race.”

Jon has lived for more than fifty years in Primrose Hill and loves that “it really is a village, open and wide, and next to greenery”. During lockdown he got to know his neighbours “like never before”; Covid-19 has given us all a wake-up call to think more about others. “As it was such a huge shock, we’ve had less focus on issues like climate change,” Jon contemplated. “But coronavirus has touched us all, in every aspect of life.”

Then he added, and not for the first time, “Let’s not forget that I’m speaking as someone living in a privileged community.” For Jon Snow inequality is “one of the greatest scourges of our time and the cause of so much pain and suffering”. He remembers vividly the emotions he felt at the age of eighteen doing voluntary service in Uganda and observing children so hungry for education. He feels that young people would still benefit immensely by playing their part in experiencing the developing world.

Finally I asked him how he manages to keep on presenting the news when constant distressing reports make many of us feel like avoiding it. Apparently, sometimes Jon Snow does shed tears, but he’s learned not to become embroiled or dogged by calamity and injustice. “After all, every day is a climax and then it begins all over again. Besides, I would say I’m an eternal optimist.”

After we elbowed goodbye, I was already thinking of all the further questions I would have liked to ask him. I went home on the wind of a prayer I learned in the Middle East: that ‘from his mouth to God’s ear’, meaning ‘may it come true’, that out of this pandemic will come a better society.