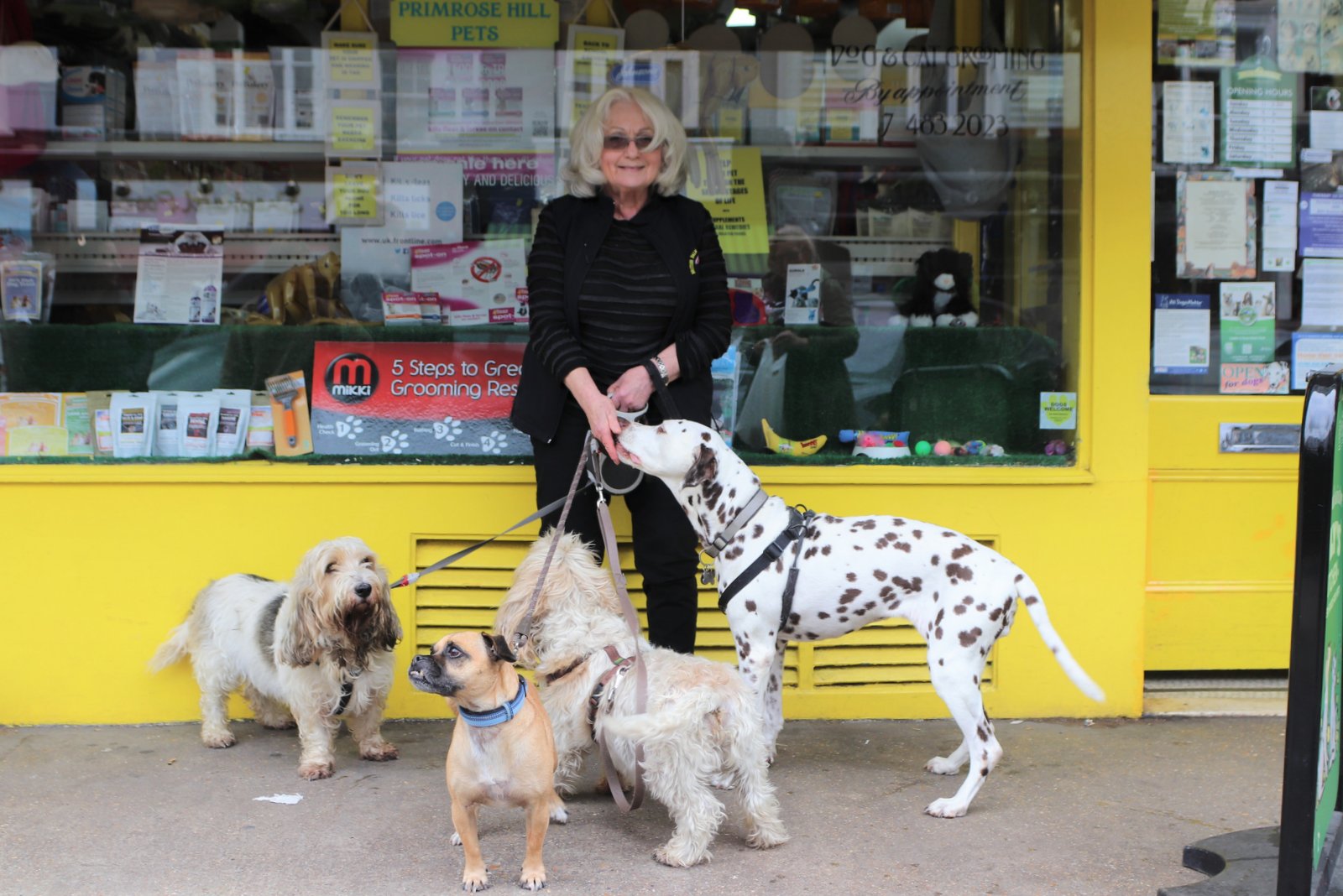 Gail Levy has been owner and manager of Primrose Hill Pets for almost twenty-seven years, so it’s no surprise that she is passionate about animals, and especially dogs. Gail used to breed, show and judge Dalmatian dogs; today she still lives with one and is a volunteer for the organisation Dalmatian Welfare. It was Gail who organised the first Primrose Hill Dog Show, and for many years she was responsible for managing the prizes for this annual event.

I met with Gail at Primrose Hill Pets and we sat on stools in the back room, which for the last twenty-two years has been converted into a space where the confident and competent Antonio and his assistant brother groom dogs. Gail is in awe of Antonio’s ability to calm and relax even those dogs that are reportedly adamant that they don’t want to be groomed. Furthermore, there’s a four-week waiting list to have your dog brushed, bathed and trimmed by the shop’s Brazilian dog whisperer.

The grooming service fits with Gail’s aim to be more than just a shopkeeper selling all the items that dogs and cats need. The first thing she tells me about her business is her wish to give helpful advice to people who have a pet. What she often tells new owners of dogs, especially those still in the first nine months of puppy training, is that it’s important to remember that a dog doesn’t come into your life knowing what you expect of it. As much as a dog is a great companion, it is not a baby.

Gail sells practical and lovely coats for dogs but she doesn’t encourage people to dress up their pets. In fact she thinks that sometimes when a dog becomes aggressive it’s because that dog is not being understood and respected as an animal. “We can’t forget that our values are not the same as dogs’,” says Gail. For instance, she adds, part of the fun of a toy for a dog is to be able to chew it and try to remove the squeak inside, and that’s why most of the toys she sells are not indestructible.

Gail insists that to understand a dog’s behaviour we must remember the essential nature and characteristics of different breeds.

Over the years Gail has seen a trend for dogs costing over £1,000 that are commonly known as designer dogs, like Labradoodles (half Labrador, half Poodle) and Maltipoos (half Maltese, half Poodle). Whilst acknowledging the evolution of cross-breeds, Gail insists that to understand a dog’s behaviour we must remember the essential nature and characteristics of different breeds. Dalmatians, she explains, were originally bred to trot with horses and can easily do so for forty miles; so without the right sort of exercise they can become hyper. Labradors have a basic urge to chase and pick things up; so, being a working breed, they need a fair amount of exercise. Beagles can run off in the park and not come back for a while, because they are scent hounds, bred primarily for hunting, and water dogs will want to dive into ponds. “Originally every dog was bred for a working purpose, and that instinct will and should remain with the dog; it’s up to us to recognise this when choosing a puppy,” Gail explains.

Gail often advises people on which breed would suit them and which breeders to contact. This free advisory service is something that would rarely have happened back in the days when pet shops were premises with sawdust on the floor, selling imported food from America, and with puppies being sold in windows. Nowadays the British-made pet food market is booming. Also, this April will see Lucy’s Law being passed in England (it’s already been passed in Scotland) making it illegal for puppies to be sold through third parties like shops and online adverts. As people will only be able to buy puppies through rescue organisations or directly from breeders, this should stop those who, solely for financial gain, bring puppies with false paperwork from across Europe to England in the boots of their cars. Over the years the Primrose Hill dog shows in the park have raised money for PupAid, which helped make Lucy’s Law a reality.

It is not just Gail’s knowledge and passion for dogs that have made her and her shop a vital part of the Primrose Hill community. She and her enthusiastic dog-loving staff connect easily with their customers, whom Gail describes as mostly sensible and caring people, who prefer to spend their money on quality items. Also, Gail’s ‘every dog that visits the shop gets a treat’ policy has meant that some dog owners find they can’t pass the shop without their dogs stopping to scratch on the door to be let in. “I think,” says the energetic, youthful, happy lady that is Gail Levy, “the dogs must meet in the park and tell each other about the free treats.”