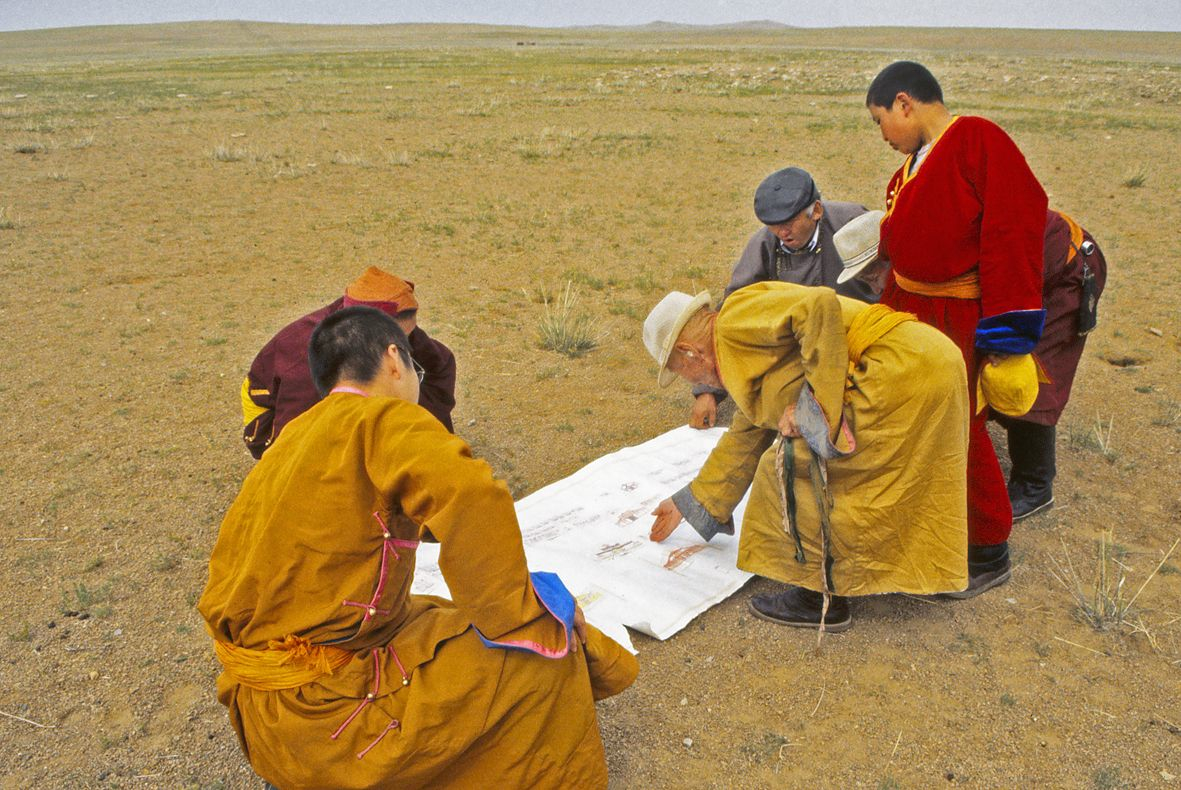 Ringing on the bell of a conventional house in Gloucester Avenue you wouldn’t expect to find a flat full of vibrant Mongolian and Tibetan paintings and embroideries, but long time Primrose Hill resident Sue Byrne is a passionate advocate for Buddhist traditions in Mongolia.

‘When I was a child I used to dream of being in a field with huge spaces around me, that was my idea of bliss, and that is what I found in Mongolia.

I first went there in 1993, sent by the Tibet Foundation where I was a volunteer, to see what was left of Buddhism and what support could be given. It was three years after their peaceful change to democracy. I discovered that all the temples had been destroyed in the late 30’s, by Soviet inspired communists, except for just one in the capital, Ulaanbatar.

I had an old Chinese railway company map from the 20s, which I had found at the Royal Geographical Society, and showed the sites of all the temples. I went with a senior monk from the monastery to his home in the Gobi and saw the site of the temple where he had been as a boy – only an earth platform and some circles of stones were left.

Imagine all the parish churches in England being destroyed, even in the Reformation most church buildings survived. Mongolia had its own culture, and the cornerstone of it was simply obliterated.

I teamed up with an American banker who had travelled a lot around the country, advising on the privatisation of an agricultural bank, and we managed to raise some money for a survey. We didn’t want to restore buildings, that was not the point, rather to document what had been there before all the people who remembered died. There were quite a few old men at the Ulaanbaatar temples who had re-appeared after years, pulled out their lama robes from ancient trunks and told their families that they had been a monk, so we asked them to tell us their life stories.

We did a pilot using foreign students in 2004, but foreign students need a lot of pastoral care in these harsh conditions and terrible roads, and the interpreters really didn’t have the Buddhist vocabulary, it had gone. So in the end we decided to use 6 teams of 3 locals – a monk, a Mongolian academic and a driver.

It has taken a long time to assemble the data, and now we are days away from the launch – we shall have a facebook page and a website –www.mongoliantemples.net- (‘Buddhism in Mongolia’) a fantastic resource and connection for Mongolians to their cultural heritage. We found 1,000 sites and now there are GPS readings and photographs.

My professional background was as a market researcher in an ad agency. In the late 80s I studied social anthropology at Cambridge and then went freelance, so all my skills have been useful for this project.

My next research is to find archive photos for the sites – they do exist – I have discovered a Lieutenant Binstead who was a British intelligence officer in the region before WW1 (like me a bit bonkers!) who travelled with a Mongolian monk and stayed in a monastery. All his photos were recently shown in the National Museum in Mongolia and his diaries are going to be translated and published there, 100 years after his death”.