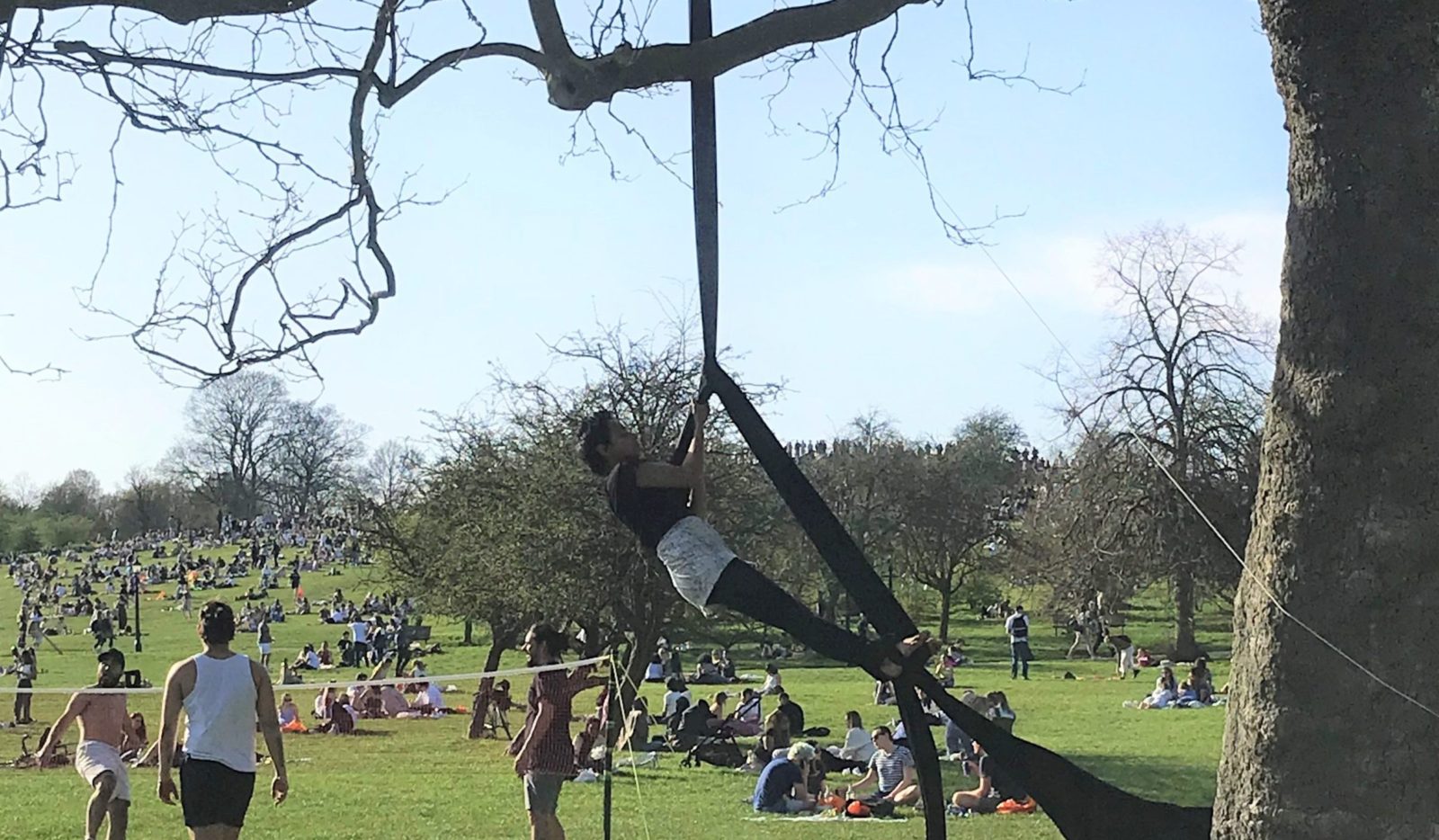 After a year of disrupted schooling and university, no opportunity to travel, few job prospects and soaring mental health referrals, many young people have struggled this year.

So it’s not surprising that when restrictions relaxed to allow groups of up to six people to meet, and the weather shot up to 24˚ degrees, there would be a celebration on Primrose Hill.

The atmosphere on Tuesday was festival-like. A volley-ball net was out and people played ball. A smoking bbq was surrounded by a crowd of people. Everyone had picnics and drinks. There was a feeling of joy in the air, a release. But just slightly, at the edges, was a sense of uneasiness. Five bikes suddenly crowned the top of the hill and flew down the path at great speed, adroitly swerving around everyone in their way. Some looked impressed at their cycling ability but others were terrified they’d hit someone. A child? But there were no children in the park, or dogs; none of the usual early evening park visitors. These were almost exclusively young people under 25. It was a take-over, and they were determined to make a night of it.

Ten minutes later, reports emerged of a man wielding a knife and police were called. They issued stop-and-search measures. But brawls still broke out, and one man was accosted by individuals who threatened to kill him and his dogs.

The evening wore on and the picnics made way for drugs and alcohol. The day time crowd in Primrose Hill is very different to the night time crowd. The former is rowdy (many parks across the UK are dealing with that at the moment) and there are certainly some unsavoury elements. But the night time crowd is now dangerous. Cars arrived at 11pm, 1am, 2am, with huge amplifiers. It was threatening.  Drug dealing went on all night. If residents attempted to confront them, there was verbal abuse, and the chance of assault.

When the toilets closed, partygoers rang doorbells asking if they could use residents’ facilities, and others simply went where they could, in doorways, streets and bushes. On a hot night, such as Tuesday, and at times last summer, there can be over a hundred people urinating in any one street. The toilets in the park shut at 8pm, and there are no plans in place for any provision after that time.

Some people began to drift home. One woman was seen lying in a stupor on the pavement, her arms around a lamp post. Others stayed all night until the sun rose.

The morning showed a scene of carnage with urine, faeces, vomit and condoms mingled with broken glass and piles of rubbish. Dog walkers kept their dogs on leads; there have been too many expensive vet bills from dogs treading on broken glass, or eating ketamine-laced vomit. Children were also kept close at hand.

The huge new bins, which have divided opinion, had evidently not been utilised. They may be of no use to children as they’re too high, but these were adults, who chose to leave their rubbish behind.

Residents who live close to the park are at the end of their tether. Events like this have been commonplace over the past year. They are on the front line of constant noise, as well as their streets being used as a toilet facility and drug dealing patch. Many of the gatherings are organised on social media by drugs gangs presenting Primrose Hill as an all-night venue where you can pretty much do what you like, be it drugs or to play music on sound systems. The police heroically come out several times a night but partying more often than not resumes once they leave.

Primrose Hill is the only central London Royal Park not currently closed at night. This adds hugely to the pressure in the park in terms of crowds. But in spite of this, there is no infrastructure in place to make it safe at night. The police no longer have the resources to cope with the problem due to cuts. The Royal Parks are regularly emailed with pleas from local residents and ward councillors. Many would like to see the park closed at night, for a trial period at least.

Gates, like the bins, divide opinion. Many urgently wish to shut out the partygoers, but there are others who see gates as an infringement of their freedom to enjoy the park at night. New barriers would cost in the region of £300,000. The running track in Regent’s Park has been locked for much of the past year, but people still climb in. The gates may prevent law-abiding citizens from entering, but would they be a deterrent to those set on being disruptive? Would closing the park at night work at least until the authorities regain control over it again?

Once there are alternative diversions for young people, will they move on? When the pubs open again on 12 April, might that ease the situation? Or when clubs reopen on 21 June, will that be a preferable alternative to sitting in a park? Perhaps the lure of a better sound system and more dignified toilets will exert a pull. But possibly these youngsters, who have sacrificed so much, will simply decide not to spend money they don’t have on expensive club fees and hiked up alcohol prices, and keep partying in the park. It’s a complex situation, and one which we all hope can be resolved before something goes seriously wrong.