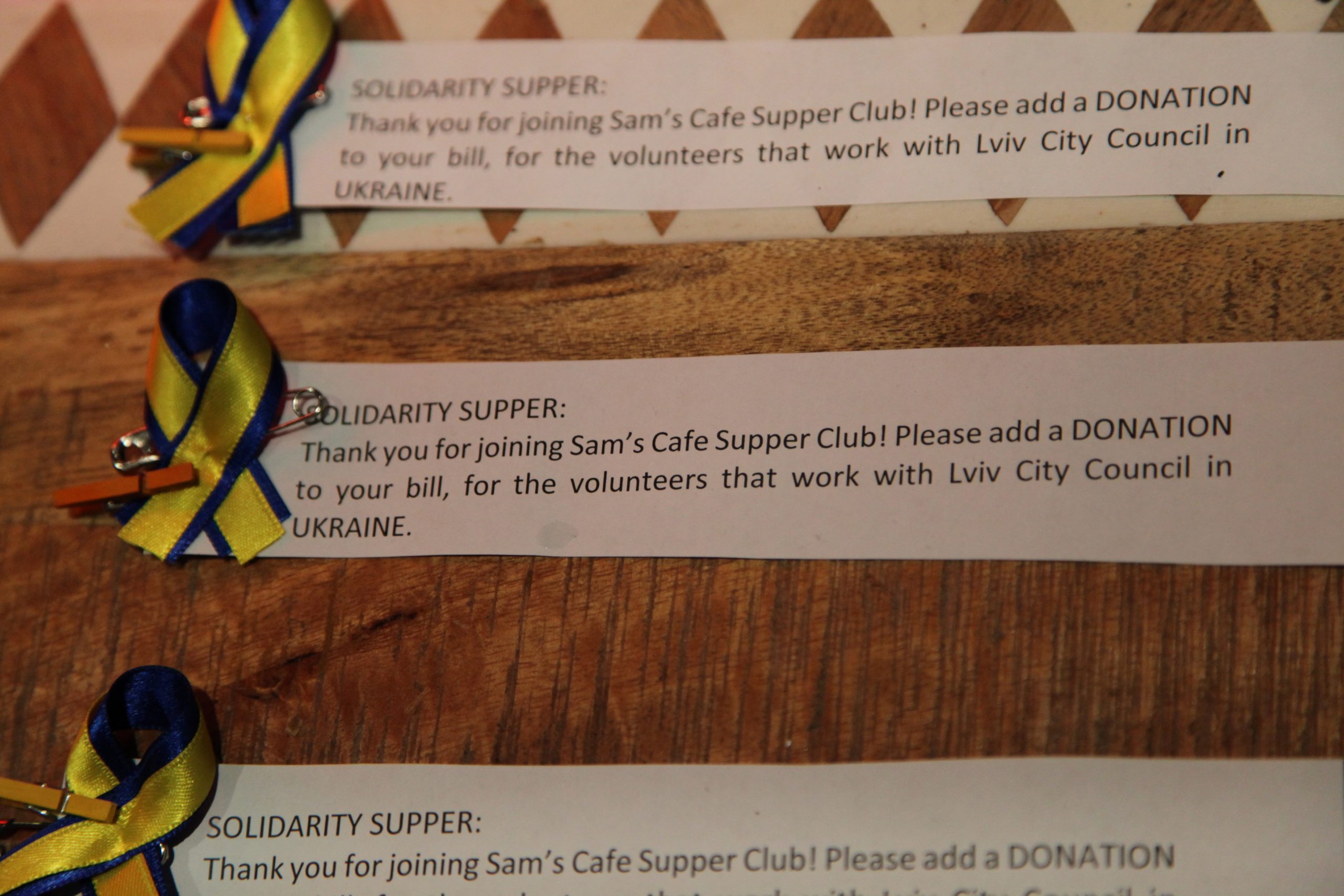 Sam’s Café holds a popular fortnightly Tuesday Supper Club, and back on 15 March it took the form of a ‘Solidarity with Ukraine’ evening. It was organised by UK Must Act, a chapter of Europe Must Act, which campaigns for migration and asylum reform across the UK and Europe. The evening consisted of a live panel discussion, a pre-recorded interview, music, poetry and a three-course supper. It was well attended, with Jon Snow amongst the guests. Snow’s latest documentary, Jon Snow Presents: What if Putin Goes Nuclear, is available to watch online on All 4.

As the guests arrived, a pre-recorded interview with a Ukrainian actress, Diana Muzyka, played in the background. She detailed the realities of escaping the war and eventually arriving in Germany, and her interview was followed by a live Zoom call with panellists. Then, before the supper began, a Polish musician and activist, Zwykla Polka, performed her latest song dedicated to those fleeing Ukraine; and Syrian refugee Entissar Hajali read her apt poem, Hope.

Alicja Pawlowska and I organised the evening, having met as volunteers with UK Must Act. Refugee rights are close to our hearts as Pawlowska, who is Polish, spent time volunteering at the Polish and Belarussian border in August 2021; I am Syrian and work with Middle Eastern refugees in the UK, helping with English language skills and integration.

The Ukrainian crisis hits a nerve for me because of my Syrian heritage. My father watched his hometown of Aleppo bombed on the news by the same army that has now invaded Ukraine. Coincidentally, our event coincided with the 11th anniversary of the Syrian war.

Pawlowska, who moderated the evening’s panel discussion, met the panellists at the Polish and Belarussian border, where refugees were falsely promised asylum in Poland if they crossed through Belarus, orchestrated by Belarusian President Lukashenko. Once arriving at the border, they were met with soldiers instead of sanctuary.

The panellists were Sara Cincurova, a freelance human rights journalist who fled Ukraine during the invasion after reporting from the frontline, and Polish MP and urban activist, Franek Sterczewski. They discussed the border before and after the Ukraine invasion, the invasion itself, and the EU and UK’s response to the crisis.

Cincurova recalled, “When I was fleeing Kharkiv myself, I stopped at a hotel in central Ukraine. It was impossible to find a room, impossible to find a safe shelter, because there were hundreds of thousands of people on the move. The receptionist said to me, ‘You cannot buy a room or anything because money has no value here any more’.”

Just as in Syria, Ukraine is at the edge of unprecedented food shortages. Donations from the evening went to a group of volunteers that work with Lviv City Council to provide food supplies for refugees and soldiers on the frontline, in Lviv and beyond. “The war is likely to echo the Syrian scenario, in that our ability to win the war is linked with our ability to feed the nation,” the Humanitarian Aid Coordinator for Lviv City Council explained.

We will be hosting another local event in the coming months: to share updates from the ground in Lviv, more information about our campaign, and how you can support asylum seekers and refugees in the UK.

To stay up to date with UK Must Act’s campaign, to volunteer your time or to attend a future event, join our mailing list at landing.mailerlite.com/webforms/landing/m9n9r0