About Face: Putting A Stamp On It 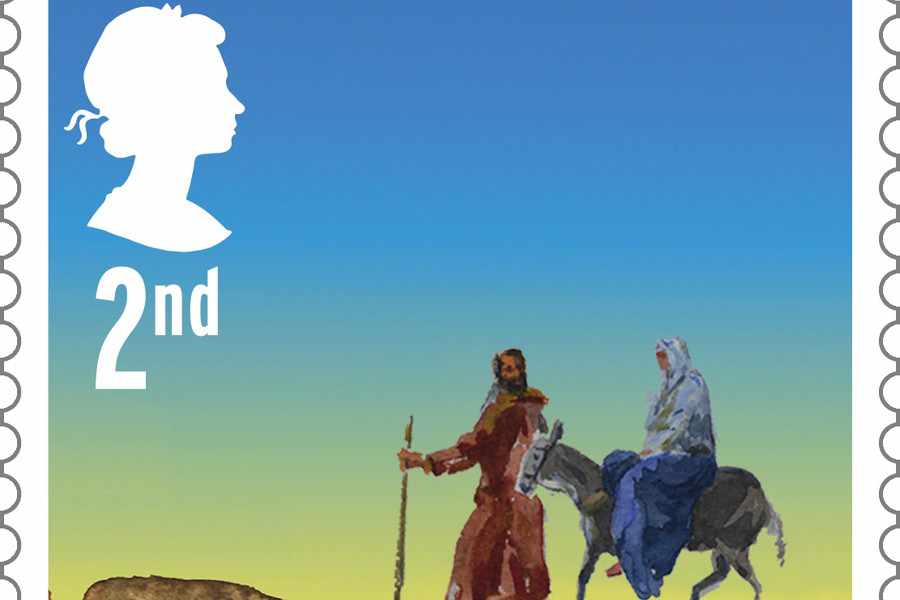 On 3 November philatelists and collectors across the globe will be waiting to see the Royal Mail’s 2015 Christmas stamp selection. This year they have been created by local artist, David Holmes. Sarah Smith went along to discover more about him and find out what it was like to win this unique commission.

“Here’s the first surprise. I was christened Frederick Cecil Holmes, not David. Both my grandfathers were called Frederick and Cecil was my father’s brother’s name and they were very close. Now I wish I had never changed my name; for a ‘dauber’ or artist Cecil is a much better name, isn’t it?” he said with a smile. “I can’t go back now but I thought David was more straightforward. One of my best mates calls me Cess which I like, short for Cecil.”

David Holmes describes himself as “An ordinary bloke: nothing special, I just happened to be endowed with a visual ability and could draw when I was very little. Second to bottom of the class in mathematics and top of the class in art. It just happened that way. My wife ‘tut tuts’ whenever I have to deal with money so nowadays my son looks over my shoulder.

“I am an illustrator and a painter and, like others, when I’m no longer around I would like my work to have a certain value. I’ve had three paintings shown at The Royal Academy and will see if I can keep that up. Naturally I would like my stuff to be seen as something that people like to collect. As an illustrator life is different because the phone will ring and someone will say ‘David, can you draw a bunch of bananas for M&S?’ You agree a fee, you do it and then you get paid. If you make a painting you are solving your own problems and your work sits in the studio until such times.”

“So when did the phone ring for the Christmas stamps?” I ask.

“Well over two years ago. It takes that long. I didn’t leap with joy when I got the phone call. These things are never easy and at the initial stage they ask three people to submit some roughs and a committee decides who should go forward. I think there are three separate committees so I learnt not to be too pleased at the beginning. I finally found out that I had been selected about two years ago so then you start work and I felt it was a privilege to be asked.”

“Tell us about the brief and the whole process.”

“As I understand it the themes are alternated. One year it is Christmas trees and holly and the next illustrates the traditional Christian Christmas: the nativity, three wise men and so on. 2015 is the turn of the traditional and the initial brief was for five illustrations:

“The Annunciation is when the Angel Gabriel comes down to Mary. In the past they have been painted with him standing there and I have tried to re-interpret what it was about in a simpler way. God is symbolised by the white dove here. I was trying to make it pictorially delightful and leave some of it open to interpretation. Nobody was there at the time with a camera so my images are somewhat symbolic. I managed to get hold of some lapis lazuli. It comes from Afghanistan and is very expensive and very rare and in times past it was only used for Mary’s garments. It’s a fine blue powder and very poisonous and you have to wear a mask when mixing it. I rather liked using a bit of it as a sort of Holmesian nod to those great masters of the past. 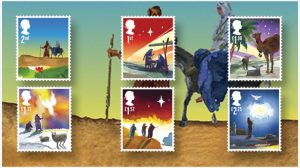 “The amount of work you have to do is very significant. Roughs, too-ing and fro-ing and the committees saying ‘Can you make the sky a bit darker or is the manger working?’ And I had to keep reminding myself that these are going to be produced in the size of a thumbnail so I left out detail to keep it simple. As they are reduced down to such a small size I wanted bright powerful colours.”

“When you first started working on the illustrations what scale were you working to and in which medium?”

“I began about postcard size and I worked in watercolour. The challenge with that is you can’t then paint it out if you are not happy as you can with oils and if you want to make a change you just have to start again. For example if I was painting the foreground of Mary and Joseph’s journey and I then wanted to change Joseph’s hand, I would have had to begin again. So these images are created as a combination of my work and some computerisation. Modern technology makes it feasible and the right thing to do in this case. My son Toby is a master at this and I couldn’t have put these pictures together it without him.”

“So how did the sixth stamp come about?”

“Well I had finished them all when they came back and said they needed a sixth stamp image. It was felt that the story of being turned away from the inn was rather sad for a stamp so it was decided that we should focus on animals. And I like animals so for this last one I used a camel and some lambs. I was inspired by Las Meninas, the famous painting by Velasquez with himself, as the artist painting a family group, looking out from the painting, so I wanted all the animals to be looking out at the viewer. We are being watched, involved. But there was a request for the camel to be looking sideways, although I didn’t agree, so on the printed stamp just the camel is in profile.”

“Which one is your favourite?”

”I think The Nativity because it was so difficult to do. I like the shepherds and their sheep too, they are simple and the light is good.”

“So were there several phases to this and when was it all signed off?”

“I think there were five different committees to present to and all six stamps were eventually signed off in January 2015. It is rather like the Grand National: lots of hurdles to jump over but we got there in the end. But I enjoyed the whole experience. A very good friend of mine, Brian Grimwood, said ‘It is really important to paint things you haven’t been asked to do before.’ You can so easily get into a rut and carry on doing the same thing; drawing trees or flowers or what you are known for. The threat or possibility of failure seems to add a sort of creative frisson. That can only be a good thing.”

“Well there is something going on and I can’t quite work out what that is. And as you get older I think you have to take notice of that, just in case! I am neither an atheist or agnostic I’m a sort of enthusiastically charitable supporter of all that is done by our churches.” David said with a chuckle. “But I believe we have to be respectful and we have to be kind. Be kind to one another, just be kind”, he said with a catch in his voice. “Any act of kindness must be good for all of us.”

“So are you going to a launch party for the Christmas stamps or do they just simply arrive?”

“Well there might be a big party somewhere but I haven’t been invited” and that brought on another chuckle.

“Tell us what you like to do when you aren’t painting? Do you have any other passions?”

“I don’t think there is anything. I’m lucky enough to do what I enjoy doing, painting and illustrating and designing. I do like gardening. I am not a great gardener I just like to get out and fiddle around, physical stuff. And I love chocolate. That is very important and I am always in search of great coffee.”