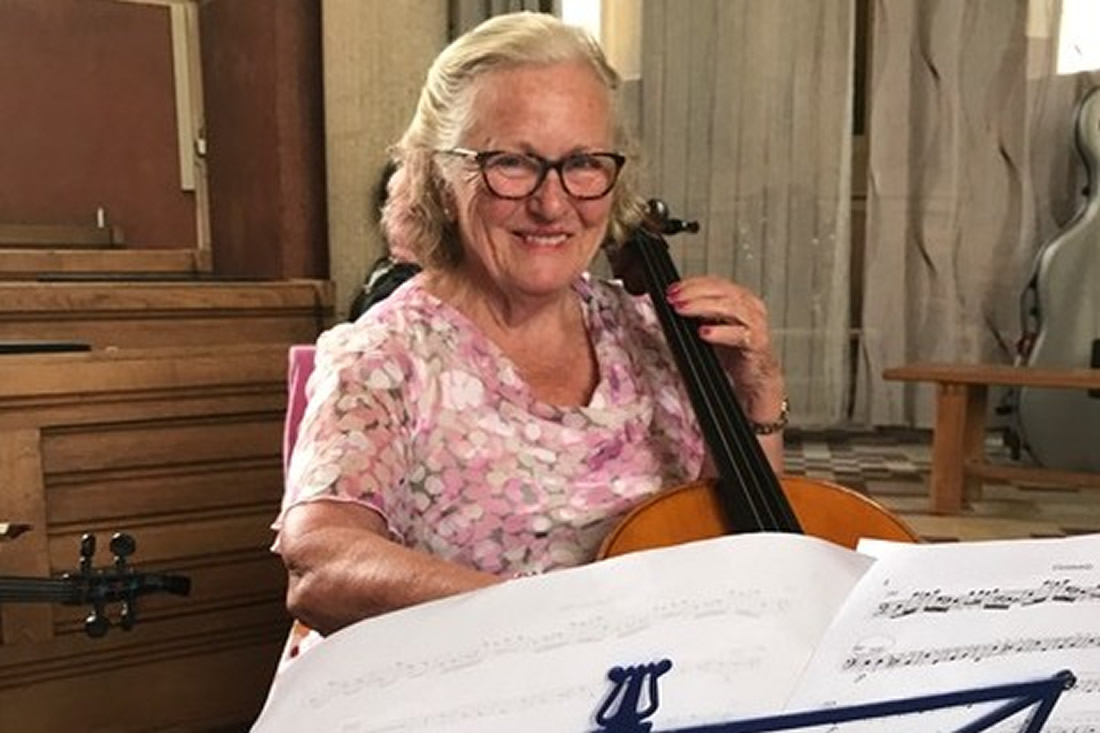 I first met Sue at her ‘Cello Love’ event, which is a two-day gathering of amateur cellists. It was just one of several relaxed, welcoming orchestral sessions which she organises, usually at the Primrose Hill Community Centre.

Sue was born just before World War II. When the war broke out the family moved to Worthing, but her father was in the RAF and stationed in Cambridgeshire. She remembers the family’s Anderson shelter and her serious concerns about its ability to protect them.

Later in her childhood the family lived in Iraq, and she has happy memories of her small school, of learning to ride a horse and of paddling (against orders) in the Euphrates.

On return to the UK they moved to Oxford, and Sue attended Milham Ford Grammar School for Girls.

Although she sang in the school choir and had a few piano lessons, there was no school orchestra and she did not develop her musical interests at this time. One of her interests was Latin, and she recognises its value in every walk of life.

Sue left school at the age of sixteen and began a childcare course at Dr Barnardo’s, which was the basis for her future work. When her sister-in-law developed polio and was in an iron lung, Sue’s training enabled her care for her niece for a year.

The Lady was the source of Sue’s next move, after she applied for a job in the magazine and was appointed to look after two children in Oxford.

Travel features quite prominently in Sue’s life, and after a year working in Athens she felt the need for further qualifications and so trained as a children’s nurse in Carshalton. She worked there as a staff nurse for eighteen months until the travel bug resurfaced. “Where’s Beirut?” she asked when another advertisement in The Lady caught her eye.

She was encouraged in her adventurousness by senior sisters at the hospital, and off she went to care for two children in Beirut in 1964. Two eventually became five, and she remained with them and travelled widely with the family of Adnan Khashoggi for about 22 years. That family is of great importance to her, and she has retained links with them.

Eventually, after the children had grown up, she moved on to Los Angeles initially and finally back to the UK. At this time she cared for a child in Chelsea and later a little girl in Belgravia.

But all good things come to an end; she retired from childcare and moved to Primrose Hill, where she has found great happiness. She is extremely grateful for the chance of a home in Oldfield, and I have little doubt that the feeling is mutual.

Although officially retired, she is busier than she has ever been and the local community is now the beneficiary of her caring nature. This ranges from arranging tea parties for her own age group and reading to small children as well as all the musical activities. She sits on a committee for the Primrose Hill Community Centre and runs the toy stall for the Jumble Sale and the Summer Fair. In typical Sue fashion, she pays tribute for all these activities to Mick the manager, who supports all she does.

Sue herself is a skilled cello player. When one of her charges was four, she saw an article about music classes for young children at the Royal Academy. As the child learned, so did the accompanying Sue; and eventually, when the child learned the cello, Sue thought she should learn too so as to be more able to help her. She progressed to become a good chamber musician with a string quartet, and now enjoys and organises the local musical scene.

Sue arranges Chilled Strings one evening a week, an orchestra on another and monthly ‘Play Days’ for a full orchestra. Two or three times a year we have ‘Cello Love’ to look forward to. For one person to organise these events and provide the venue, the conductors, the other professionals when needed, the scores and the food is nothing short of amazing. There is a guaranteed warm welcome, no matter what your standard of playing.

Sue’s favourite composers are William Boyce and Mozart, but her enjoyment of music is wide-ranging and includes the blues. Radio 3 and Classic FM provide much of her listening. She would love to go to the ballet, and used to be a regular attender at Wigmore Hall. (Tickets for either of these would make excellent gifts for her, I think!)

Sue’s proudest moment was being invited to the Buckingham Palace Garden Party; she and her god-daughter had a memorable time, and of course she wore a hat.

It is a great good fortune for the people of Primrose Hill and for musicians from further afield that Sue is happily bringing joy into our lives.

I feel blessed that I have become a tiny part of Sue’s musical family, and that musical family sits alongside the affection she has for the children she has cared for. I hope that she will continue to get happiness from her charges. It is my privilege to be able to say thank you, Sue!