About Face: Matthew Wright on Fishing 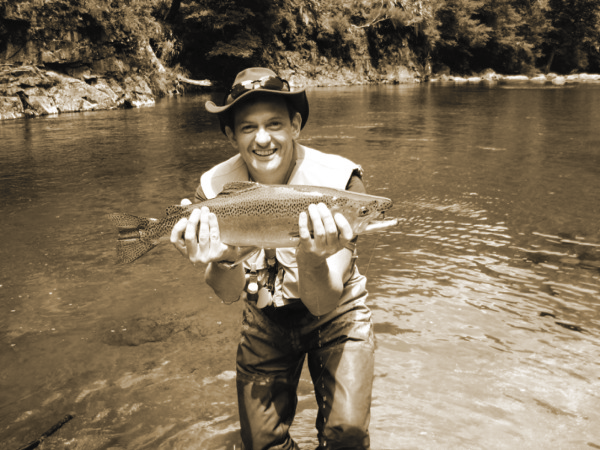 I’m not stupid. I know when I say I go fishing people think I’m some kind of dullard who gets his kicks spending an inordinate amount of time doing nothing on riverbanks in the expectation that something might happen. Non-fishers invariably think angling boring, dull, slow, fiddly and boring. Did I mention dull?

I can’t remember who said there’s a fine line between fishing and standing on the bank like an idiot but they weren’t completely wrong. Fishing can be boring. It can be dull, too, but it can also be anything but. When I first met my wife, before she even knew she was going on a date with yours truly, I told her boldly: “I go fishing to the most beautiful places around the world. You could learn and come with me or stay at home on your own”.

Seeing a fish rise for your artificial fly, a small quantity of feather and fur tied to a hook, sets off a very primal response in the angler. You are actively hunting, stalking your quarry. You have to immerse yourself, metaphorically of course, in their world. It was a moment that changed my life.

Happily, since that fateful meeting, Amelia has fly-fished with me around the world, fluff-chucking in rivers as far apart as South Africa to Slovenia as well as in the warm, salty waters of the Caribbean: the Bahamas, Cuba, Mexico and Turks and Caicos where we eventually tied the knot (after a morning’s fishing of course) as well as in the cooler waters of Scotland, Wales and my favourite streams on Dartmoor and Exmoor.

A photograph of her best fish, a magnificent Welsh wild brown trout around 3lbs in weight and set free straight after, adorns the bar room wall of a well known angling hotel. She’s well and truly hooked and I reckon you could be too.

I was only eight years old when I caught the fishing bug on a family boating holiday on the Norfolk Broads. Rubbish equipment and not a clue as to what to do with it were no bar to my blossoming talent. I would creep out of the hatch above the forward berth at sunrise and perch on the bows with a quarter of a pint of maggots catching bream, roach, even an eel but, ironically, no perch!

When we got home I switched to a nearby lake in south London and found some fishy pals at school who knew much more than I about ledgers, stick floats, boilies and the breaking strain of nylon lines. I learned fast. By my mid-teens I was spending weekends camped out by lakes hoping to snare elusive but mighty carp. Carp fishing, to be fair, can be dull, very dull indeed.

Addicted carp anglers spend many days alone on bed chairs, sleeping in bivvies, investing vast sums on new fangled kit that promises to give them the edge.  By my mid-30s even I could see it was not only boring but hard work, lugging half a ton of kit from the car to a remote spot on a lake a mile and a half away only to catch naff all.

It was around this time that I quit my job as a newspaper columnist to launch my Channel 5 TV show, The Wright Stuff. Unbeknown to me, editor Piers Morgan arranged a whip round for my departure and at my leaving do I was presented with £1,000 of fly fishing kit. I didn’t have the nerve to tell my soon to be ex-colleagues that I hadn’t got a clue what to do with it. So I bought a book and practiced in the back garden.

After a few months perfecting, or rather trying to perfect, my fly fishing cast, I ventured out to a lake and caught a rainbow trout first go. Fly fishing for trout, I discovered in that moment, is nothing like anything I’d done before involving a rod and line. Seeing a fish rise for your artificial fly, a small quantity of feather and fur tied to a hook, sets off a very primal response in the angler. You are actively hunting, stalking your quarry.You have to immerse yourself, metaphorically of course, in their world. It was a moment that changed my life. I’ve learned so much since taking up fly-fishing that I now campaign for improved river habitat and protection of all river wildlife for both the Salmon and Trout Association and the. And if people tell me fishing’s boring I just remind myself, “Well, at least it ain’t golf! ”