UPDATE 23 May 2019: Sam’s Café is moving into L’Absinthe’s building (40 Chalcot Road) after being closed at it’s current location for several months

Primrose Hill welcomes the new café on the block, Sam’s Café on Regent’s Park Road. A cross between an American diner, a Parisian café and serving British food, the café has its roots steeped in literature, music and film.

Sam’s Café is the creation of Sam Frears (son of film director Stephen Frears and Mary-Kay Wilmers) and the Scottish novelist and non-fiction writer Andrew O’Hagan.

Sam grew up in Gloucester Crescent, where his family life featured in the book Love Nina by the nanny Nina Stibbe. The book was adapted into a film in which Sam played a small role, and Helena Bonham Carter played Mary-Kay Wilmers. Andrew O’Hagan also lives in Primrose Hill and the two men have enjoyed a long friendship. It was always Sam’s dream to open a café. 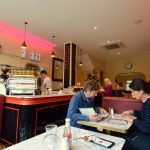 Sam and Andrew have drawn on an impressive list of literary, artistic and musical friends to add some unique Primrose Hill character to the café. The décor was designed by the legendary Jane Ormsby-Gore of Jane Rainey Design, believed to have been ‘Lady Jane’ in the Rolling Stones song.

On the walls are black and white framed photographs which Gaby Wood – author and literary director of the Booker prize foundation – bought as negatives online and developed. Down the stairs are glittery glam rock frames of David Bowie lyrics. 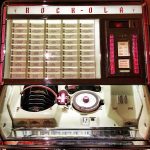 In the centre of the café, a 1952 jukebox takes the place to a whole new level of cool; the songs on it have all been selected by Robert Plant. The tracks are all old-school rock and roll, dating from 1958 through to 1962.

Charming touches are in evidence, such as the take-away wrap printed with Sam’s favourite things, and a dessert named after Andrew’s daughter: Nell’s apple and blackberry pie with custard.

There are plans for a book to be written on the café and the story behind how it started. Until then, tuck in and enjoy the food. It’s a welcome addition to our neighbourhood.