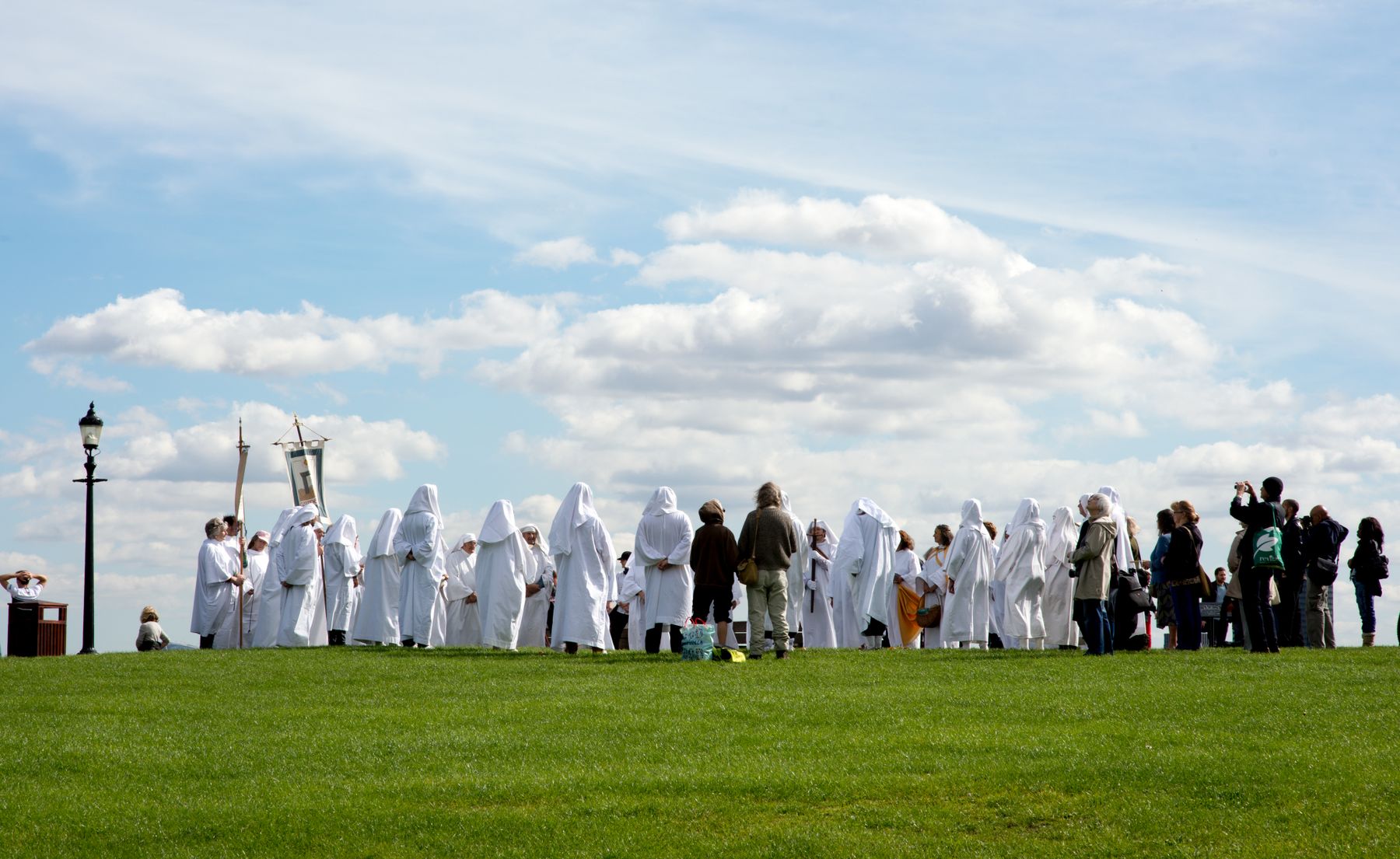 Many people who have climbed Primrose Hill will have noticed a plaque, set into the middle of the area on top of the hill, dedicated to Iolo Morganwg. Local people may also be aware, either by seeing their processions or by coming across mentions and photographs in the local press, of white-robed Druids ascending to the top of the hill at the Autumn Solstice. It is all very mysterious. Who then was Iolo Morganwg and why is Primrose Hill a centre for Druid activity?

Iolo Morganwg was the nom de plume and Druid identity of a Welsh stonemason, Edward Williams (1747-1826). Iolo is the diminutive of Iorworth, the Welsh version of Edward; while Morganwg is the Welsh name for Glamorgan. Although from a humble background, and forced to work for his living, Iolo had a great facility for writing in Welsh and English. A man of learning, Iolo became an acknowledged authority on early Welsh poetry. This had previously been largely ignored, as until then Welsh was mostly regarded, even by educated Welshmen, as little more than a lower-class vernacular. Such Welsh writers as there were tended to write in English.

Romanticism, which brought a new emphasis to ideas of nationality, race and language throughout Europe, led to renewed study of Welsh antiquities. It is not surprising that much of this was centred in London, where there were more wealthy Welsh-speakers with literary interests than in any single area in Wales.

Iolo tried to make his name as the Welsh Robert Burns, publishing a book of poems in English. Finding it impossible to support himself as a literary man in London, he returned to Wales and published widely on its early history. In doing this he made numerous extraordinary discoveries, adding a previously unknown dimension to the Welsh past. Iolo identified, in early Welsh poetry, a full account of Druidry, including a complete system of Druid organisation and beliefs – and even a Druid alphabet.

It was these beliefs, and above all the Welsh identity of the Druids, which Iolo proclaimed on Primrose Hill, at a meeting on 22 September 1792 reported by a number of newspapers. Iolo proclaimed the ‘Gorsedd of the Bards’, a court or moot, derived from a word meaning mound or hillock in Welsh, held in the open air in accordance with the ancient rites of the Druids. Following instructions from an ancient book, those present constructed a stone circle and placed a sheathed sword on a central stone. Iolo read odes of his own composition, calling for an end to despotism and demanding the return of liberty to Britain.
But who were the Druids? In classical literature, notably in Julius Caesar and Tacitus, there are a number of references to Druids, but they are mysteriously absent from the subsequent history of the Roman Empire.

No single archaeological discovery has ever been linked with certainty to the Druids. Such inauspicious beginnings did not prevent the Druids from having a sensational and varied later career. The emergence of modern nation states brought about a focus on the early histories of the territories these states incorporated. This included a wish to see those assumed to be distant ancestors in a positive light.

From the beginning of the sixteenth century on, many of the nations of Europe discovered links to the Druids. First off the mark were the French, relying on Caesar. The French were followed by the Germans, who had a proprietary interest in Tacitus, the author of the Germania, the earliest description of the German people. Later on, the Scots and the English came to see the Druids as their own forebears. What nobody before Iolo had ever thought was that Druids were specifically and essentially Welsh, something which Iolo’s work seemed to prove.

One of the main attractions of the Druids was their flexibility. They could be patriots or traitors, heroes or bogeymen, according to choice. As resistance fighters against the Roman Empire, they could be depicted as early nationalists. As astronomers, doctors, musicians, naturalists, pacifists, philosophers, poets, rulers and sages, they could lay claim to a tradition of learning and civilisation distinct from that of Greece and Rome. This flexibility has remained their greatest strength.
There was, however, an inescapable problem about all Iolo Morganwg’s work. Although undoubtedly a learned man, who made numerous genuine contributions to the study of Welsh literature and history, Iolo was also a fantasist and a forger on a heroic scale. The scale and brazenness of Iolo’s invention can be gauged from the fact that in 1791, when Dr John Williams revived the legend of a Welsh prince, Madoc, discovering America in 1170, Iolo immediately and independently forged a corpus of documents to support the claim.

From early in his literary career, Iolo specialised in plausible deception. He often ‘discovered’ unknown poems by known writers, such as Aneirin and Dafydd ap Gwylym, mixing old and new in learned editions. His own facility in both modern and medieval Welsh composition, his formidable reputation as the leading expert on the subject, and his typical mixture of true and invented learning made his forgeries difficult to detect. All this throws a cold light on Iolo’s motto on Primrose Hill, ‘Y Gwir yn Erbyn y Byd’, ‘The Truth against the World’. Even the date given on the plaque on Primrose Hill, of 22 June not 22 September 1792, is likely to be inaccurate, as the occurrence of a meeting then depends solely on the word of Iolo himself.

In Wales itself, Druids became eminently respectable over the course of the nineteenth century, with Gorsedds and Eisteddfods dedicated to the performance of Welsh poetry and music, at which the winners are crowned as bards. Outside Wales, after a period of inactivity, Druidism has grown exponentially over the last hundred years. Druids now come in all shapes and sizes, mixing mysticism, nature worship, pacifism, reincarnation and ritual.

As with most systems of belief, adherents have split into many different sects. The most active is the Order of Bards, Ovates and Druids (druidry.org). The annual ascent of Primrose Hill, which has been taking place since the 1950s, however, is currently made by the Druid Order (thedruidorder.org). Many other versions of Druidry, with alternative dates for ascending Primrose Hill, are on offer. A few years ago I myself joined in the ceremonies of a splinter group on top of Primrose Hill. This was led by the Druid of Wormwood Scrubs. Before bowing in all directions and uttering prayers to nature, the celebration began with the very practical measure of passing round a bottle of port.