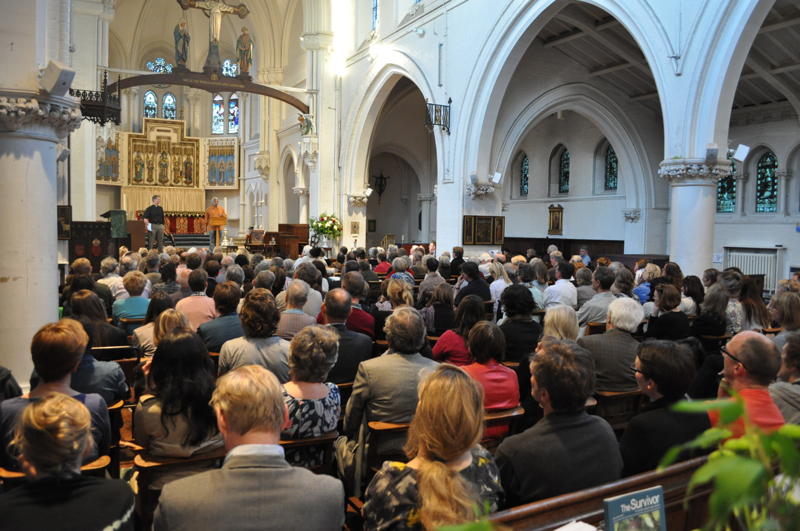 “No problem,” insisted Voltaire, “can withstand the assault of sustained thinking.” Voltaire was not, to put it mildly, a churchy man, but it was in this spirit of rigorous enquiry that St Mary the Virgin church first threw open its doors to the Primrose Hill Lectures.

The popular series, now in its fifteenth year, was conceived by Robert Atwell (then vicar at St Mary’s, now Bishop of Exeter) as a means of confronting, and debating, twenty-first-century issues. Since then, the church at the foot of the Hill has played host to some world-class thinking: past events include A. C. Grayling on atheism, Robert Winston on human genetics, Mary Warnock on euthanasia, Paddy Ashdown on international policy, as well as writers (Alan Bennett, Jung Chang, Lionel Shriver), activists (Shami Chakrabarti, Tariq Ali, Tony Benn) and cultural giants (Melvyn Bragg, Jonathan Miller).

“The aim, initially, was to create at St Mary’s a cultural community, as well as a spiritual and religious one, and Robert Atwell was entirely willing to welcome all sorts of voices into that space to speak freely,” says Annabel Huxley, founder member and outgoing Chair of the Lectures Committee. “I think it was thought a bit odd, at first, that a church would invite the views of passionate ‘non-believers’ such as Jonathan Miller and Anthony Grayling – we also had Rabbi Lionel Blue as a speaker, and Tariq Ali gave a fantastic lecture on Islam – but really that was the point, to open the discourse and reach out into the best of what London can be, which is a fantastic talking shop of ideas.

“That vision,” Huxley goes on, “has been upheld by Robert’s successor, Marjorie Brown, an equally open-minded vicar: as well as being a beautifully-led place of prayer, St Mary’s continues to have this very open door, and the Lecture Series is a really great way of working with the community: forging links with local sponsors, the library and now our local magazine, in a value-driven way which is good for everyone.”

In those early days, the committee drew extensively on local and personal contacts (Huxley’s husband, the geographer, explorer and Coast presenter Nicholas Crane was, frankly, over a barrel). “A lot of us were either journalists or working in the media, so we had address books full of writers and thinkers and commentators, but while a small committee is needed to plan the events, there’s a huge ‘hands up’ when it comes to running them. We’ve been incredibly lucky to have access to two of London’s top graphic designers, Stephen Coates and Christine Ayre. Celyn Cooke has set up a fantastic website with podcasts of past lectures, and Elaine Hedger has run the bar brilliantly since the beginning. That’s another thing you don’t necessarily expect in a church – the audience can enjoy a drink before the lecture; if they’ve very thirsty they can pop up to the bar in the middle, and most people stay for a glass or two afterwards, so it’s always very convivial!”

Time for a Refresh

While running the lectures has been ‘a privilege and a pleasure’ for Huxley, she believes it’s ‘time for a refresh’ and this year handed the reins to fellow St Mary’s parishioner Becky Selman.“I’ve always thought it was a brilliant event,” says Selman, an educationalist who “teaches doctors how to teach” at the Royal College of Physicians. “It’s no surprise that a church like St Mary’s would have this kind of thing going on: it’s not just that there are interesting speakers living in the area, it’s that people here are willing to engage with big questions, they’re interested in debate and challenge, and the church doesn’t run frightened from that. I think you can tell that from the quality of the sermons, but I also think that if the church is going to have a place in the community, it can’t just be about a one-and-a-half hour service on a Sunday morning.

“I’m very lucky that I’m being handed something that’s so well established,” Selman continues. “I’ve been coming to the lectures for the past thirteen years and I’ve always been impressed by the fantastic quality of the speakers. Obviously we want to build on that, but I think we need to consider, too, that the demographic of the local area has changed. In recent years, Primrose Hill has become even more ‘moneyed’: there are perhaps fewer of the traditional ‘North London intellectuals’ living in the area, so I think we need a two-pronged approach. We have to consider how to draw in the new demographic as well as extending our reach, so that people who can’t afford to live in Primrose Hill, but who would be interested in the kind of thing we’re doing, know about us. So we’ll be looking closely at the marketing side of things, how to make better use of social media and so on to publicise the events.”

Selman is aware, too, that while the Primrose Hill Lectures blazed a trail back in the day, the public talks circuit has expanded hugely in recent years. “You’ve got Intelligence Squared and the School of Life, as well as other locally run talks, which is a good thing because it does show that people want to come and listen to interesting speakers, but also that there is more competition for audiences. And clearly that’s a challenge, because we’re a small, voluntary outfit; we only put on five lectures, and we run on good will.”

Unlike most festivals and commercially run events, the Primrose Hill Lectures committee persuades its distinguished speakers to appear gratis. All proceeds go towards initiatives such as the Cold Weather Night Shelter and the St Mary’s Centre Community Trust, a youth work project. “We may not see it when we go about the lovely shops and cafes of Primrose Hill, but there are areas in the locality which are extremely disadvantaged,” says Selman. “There are real problems with youth crime and gang violence. St Mary’s full-time Youth Worker and his assistant do fantastic work providing mentoring, support and a safe space for young people at risk; they even ran the project on Christmas Day for kids left alone at Christmas. They work with local schools to help pupils avoid exclusion, they’ll help with applications for jobs or college, and they teach practical skills like budgeting and cooking. But the funding for all this is very precarious, and the revenue from the lectures really makes a huge difference.”

The first series of lectures organised by Selman will run each Wednesday from 7 June to 5 July; the series is set to be a corker, with four out of the five speakers already secured.

“We’ll be starting off with Andrew Marr, talking on Democracy – he’s our big local name for this year. Then we’ve got Louise Chester, an expert on mindfulness, who’ll be running a session with some practical exercises for the audience, so that’ll be something quite different from the usual format. We’ve also lined up the journalist and former diplomatic editor at Sky News, Tim Marshall; his subject is geopolitics and nationhood, which seems very timely right now. And fourthly John Mullan, a leading academic and Jane Austen specialist, will be talking about ‘What Matters in Jane Austen’ in the year that marks the 200th anniversary of Austen’s death.”

Lectures will, as usual, be followed by questions from the floor which provides an opportunity for lively, sometimes heated, debate. “We also have a great arrangement with our wonderful local book shop, Primrose Hill Books.” says Selman. “Books by the speakers are generally on sale at the end of the event, and signing sessions are a great way to meet the author and continue the conversation.”

There are also a few changes to the logistics of the talks. The start-time is coming forward by half an hour, to 7pm with the bar open from 6.30pm; the intention is to encourage audiences to make the most of their evening. “The earlier start means that people can go out for supper afterwards, if they wish, so we’ve set up a link with l’Absinthe, the French restaurant on Chalcot Road: they’ll be running a post-lecture Prix Fixe menu, and if customers show their lecture ticket, the restaurant will donate £3 to the Youth Project. This year we’ll be including a glass of wine in the price of the ticket, and for the first time we’ll be selling beer made by St Mary’s very own micro-brewery. We’ve also got a link with Earth, the whole food shop in Kentish Town, who’ll be providing complimentary nibbles to go with the drinks at the bar.”

It’s all a winning idea: ‘sustained thinking’ and a sustaining drink, all for the good of the community. I’m pretty sure Voltaire would have approved.

Info on the 2017 Lecture Series here