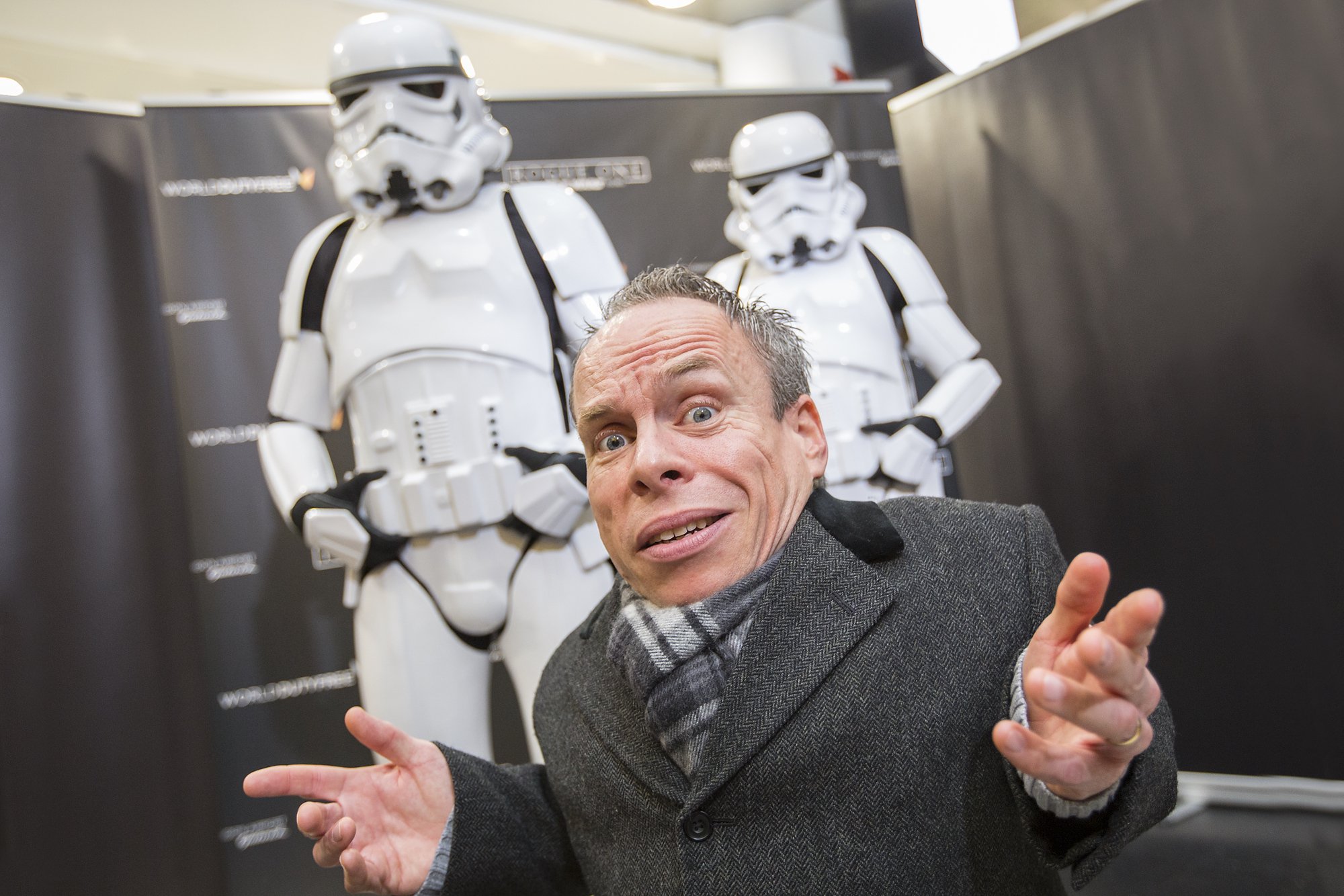 We asked what was it like to work on Return of the Jedi?

Warwick Davis: The director Richard (Marquand) worked very hard with me to make my Ewok’s character real by encouraging me to project my emotions through the mask. He also helped me create the character. I played him as a combination of a very curious 11 years old and my pet dog. Warwick learned to act with characters that he couldn’t see. They were filmed separately and projected onto a blue screen afterwards:

I had never seen anything like it before. I had to imagine not only what characters I was dealing with, but also the planet Endor. The blue screen is also known as Chroma key and it still continues to this day. In Rogue One, rather than shoot the actors against a blue screen, in certain scenes they used a massive 40 x 140 foot LED screen on which computer-generated backgrounds were displayed. The Rogue One group’s jump to hyperspace was one of the shots.

We asked what it had been like to work with all five directors?

Warwick: All of the Star Wars directors bring something of themselves to the table: camera style, writing skills, performance; they give each of these films a unique slant and character, but at the same time they are all still part of the same galaxy. But when I was working on Rogue One, the director Gareth Edwards announced: “We’re going to use ALL the tools in the tool box: CGI, models, animatronics and puppeteers!”. Richard was a bit like a magician; there are a lot of different ways to do a trick, and it made the whole film complete and convincing. I think it was lovely to see some of these skills being utilised again.

We asked if he had to alter his performance to accommodate the different techniques?

Warwick: Well, Rogue One was a very immersive experience because there was a three-dimensional, 360-degree space all around you, and there was stuff going on everywhere. You never knew what was going to be shot! Gareth would shoot and then whip the camera around, so you had to be aware that you only had limited vision and so stay in character at all times.

We asked what he thought about the future of filming?

Warwick: There was a virtual reality element whilst shooting Rogue One for the tank sequence of Jedha. The guys had this weird box contraption, which they put in the middle of the set. I asked what it was, and they explained it was Virtual Reality. I put the goggles on and it was weird, because I just stood in the same space I had filmed in but I was able to turn around and look at the whole of the space that we had been in.

Warwick’s experiences of filming have given us a unique insight into working with five very different directors, and the techniques that have evolved in the Star Wars films. Thank you, Warwick; you are a real actor craftsmen.

Warwick was interviewed by Aicha, age 13 and Iman, age 12 from Haverstock School.