Work begins on playground in The Regent’s Park 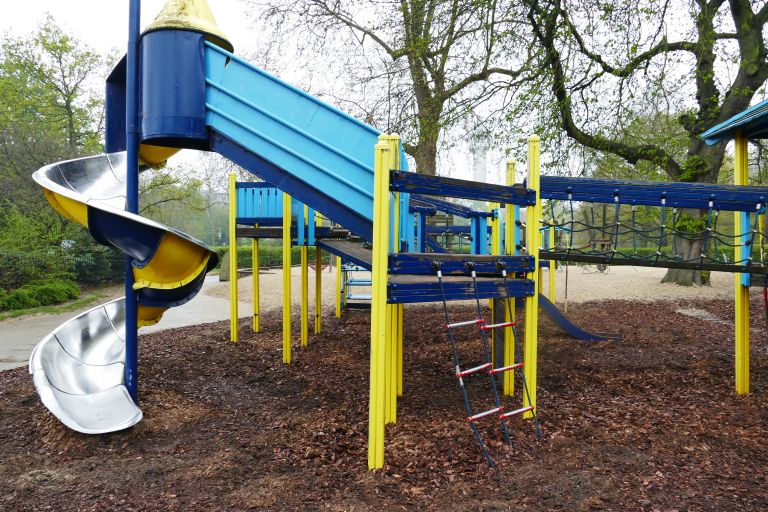 Gloucester Gate Playground, to the East of ZSL London Zoo, is to receive a complete refurbishment.

The former playground will be replaced with a landscaped space that children of all abilities can play in, made from natural materials such as rope, bark and willow.

The new playground will be almost double the size of the former playground and will feature water and sand play, climbing equipment, a zip line and a willow den perfect for rest and storytelling. It will also feature all the traditional favourites such as swings, a slide and a roundabout.

Gloucester Gate playground was constructed in the 1930s, and its appearance seems to coincide with the opening of a children’s ward in the nearby hospital at St Katharine’s Lodge. The Lodge was obliterated by a bomb in the Second World War, and rubble was used to create the mounds that now characterise the area.

Nick Biddle, Park Manager of The Regent’s Park and Primrose Hill, said: “It’s very important that we give children of all abilities the opportunity to play together and this is reflected in the design. All areas of the playground are wheelchair accessible, including the walkway bridge and water play area.”

Dennis Clarke, Head of Park Services at The Royal Parks, said: “A lot has changed since the playground originally opened, but what hasn’t, is the importance of play in children’s physical, mental and social development. The provision of high quality and free playgrounds plays a big part in this.”

The playground was made possible thanks to the London Marathon Charitable Trust, and a mix of private and public donations. The Trust is also co-funding a three-year play programme with The Royal Parks to help children to spend more time outdoors and actively play in nature in partnership with local charity, London Play.

Works are expected to take approximately five months and, in the meantime, children can use the three other playgrounds in the park, Marylebone Green, Hanover Gate and Primrose Hill Playground.