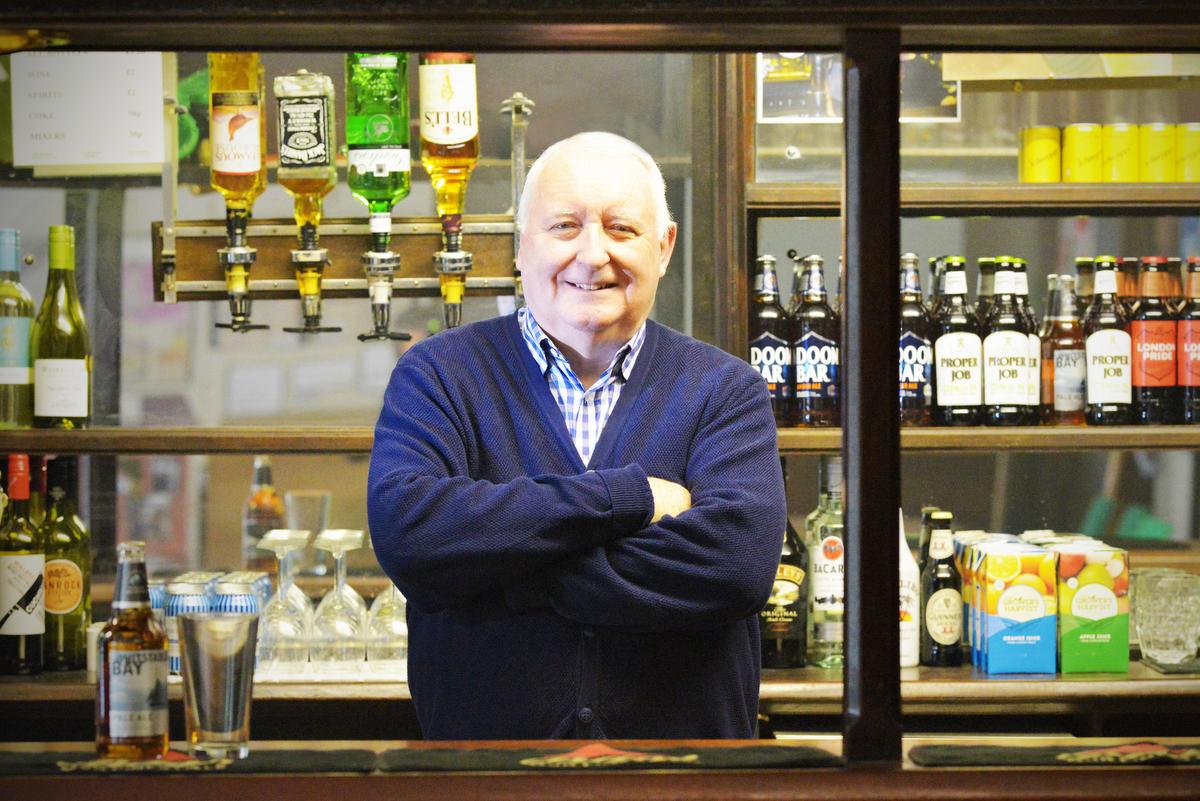 Mick and I from were going through some papers in the office the other day and found a very old programme of events for the Primrose Hill Community Centre. There used to be a bar in the Lower Hall every Friday, Saturday and Sunday! That’s a lot of boozing!

Now Hopkinson’s Bar only runs every Sunday in the Lower Hall, from 12 noon till 3 pm. Everyone is welcome.

After many years with Claire and Jack at the helm, our bar is now run by local resident John Sutton. I’ve not known him long, but he’s the kind of person you feel you’ve known a lifetime. He’s easy to talk to, with a great sense of humour and a winning smile.

John was born in Liverpool. One of six children, which included two sets of twins, John was second from eldest. He describes his childhood as ‘great fun’ with lots of ‘mud, muck and laughs’. Every door was open in those days, and everywhere you went you got fed. There were sometimes up to four meals a day ‒ each in a different house! Happy times.

John’s mum had three jobs. His dad was a school caretaker, and soon progressed to running the education department’s team of caretakers and cleaners for all of Liverpool. John left school before he could take his exams as he was offered work at the age of sixteen. His wages were handed straight to his mum.

John’s dad then went off to war. He was a Colour Sergeant in the Parachute Regiment, and highly decorated after an important event in the war. In a battle in the south of France he held a major crossroads connecting three towns, until they were relieved by the Americans’ Operation Dragoon. In France they still celebrate this triumph annually, and although John didn’t go this year, his dad and brother did. There is only John’s dad and two others alive from that time now.

John worked in telecoms, then moved to the Liverpool Echo. He was a sub-boy, which means he made tea for the sub-editors. He did lots of running around with messages and describes it as ‘fun times’.

Because he was a ‘good boy’ he got promoted to the machine room. It was big and loud but really exciting. John loved it and worked there for eight years.

He then had time working in the publishing department, and was the Union Man for the Daily Post; he then changed direction and became a pipe-fitter’s mate, which offered more regular hours.

Life was good. John and his mates often went out socialising. On a night out at the famous Liverpool nightclub called the Beachcomber, John spotted Sally and made his move. He asked her to dance at 1.55 am. The club shut at 2 am! Despite their short encounter he said that night “I’m going to marry that girl”, and he was right.

John and Sally met up again the next day to go to Southport. They quickly fell in love. Six years later they were married. But they had already moved in together, even though that was frowned upon in those days. They had a flat on the Anfield Road with no furniture, just six empty tea chests. In 1979 they had their first children, twins Ian and Sean, followed by Matthew a year later. John describes Sally as an amazing mum, the perfect mother hen.

In 1985 Sally’s sister was running the Russell Arms pub (now the Escape Bar) in Mornington Crescent. She called John to ask him to help. So he left Sally and the children and headed to London to help out for a while. Although he had only worked briefly in a rough pub in Liverpool, he knew he could do it. He really took to it, so Sally and the children followed him down a few weeks later. A move to London was good for the family; they’d fancied a change, a fresh start.

Both John and Sally got stuck in. One of the area managers saw Sally in action and offered her a job as relief manager at the Camden Stores (now the Masala Zone restaurant). Shortly afterwards he asked her if she’d like the job full-time. She then won manager of the year, and a paid holiday in France! The takings at the pub went up to £14k a week in 1985 under the management of the two of them. The top boss at Grand Metropolitan called Sally and John ‘the dream team’.

Sally’s older sister Rosemary then bought the George IV pub on Pentonville Road in Kings Cross, and they all started working together. Next, they moved to the Old Eagle in Royal College Street. When they arrived the takings were £600 per week; when they left six years later, the takings were £10,000 per week!

John says that the secret to keeping a good clean pub is to stand your ground, be clear, show no fear and never be a walk-over.

Unfortunately the dream team came to an end and Sally and John went their separate ways. Despite their split, they remain close friends. John rented a house in Chalk Farm and was out of work for a while, then got a job at Reeds Bar, Albany Street (now flats), then Delancey Café and Cocktail bar.

Newly single at 53, John walked into the Salvation Army. He admits that he was very down in the dumps. A Major from Liverpool walked over and asked if he wanted to become a volunteer. They needed help cooking the breakfasts for a steady stream of hungry blokes, mainly builders and members of the Serious Crime Squad. John was soon cooking over thirty breakfasts a day! In the end John got a paid job at the Salvation Army and made plenty of money for them over six years, but unfortunately, due to budget cuts, he was made redundant.

John then moved in with his twin sons on the Finchley Road. He had no experience in baking, but landed a job as baker at the Co-op in Archway, and soon became Head Baker. The very early mornings were a challenge, but John loved the job, which took him up to his retirement.

He heard on the grapevine about Oldfield, so applied direct; a month later he moved in. John said it felt like winning the lottery and the pools! He soon found out about Primrose Hill Community Centre, and Hopkinson’s Bar. So he went along for a few drinks and bumped into some old friends. Bar work was his trade, and Claire and Jack weren’t getting any younger, so John took over and the rest is history!

John gives up the middle of every Sunday to run the bar for locals to get together and chat over a drink. What a wonderful way to meet your neighbours and make new friends! Thank you, John, for all you do for our community. You are a treasure.