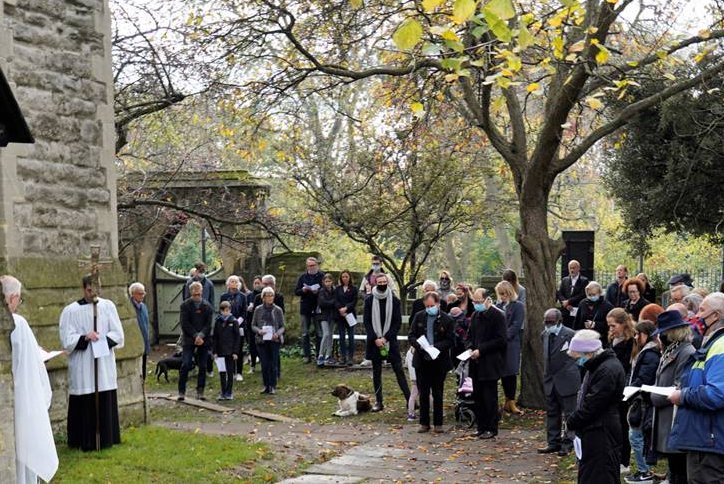 In the spare bedroom of my great aunt’s house, when I was young, was a photograph of a pretty young girl in a straw hat with her feet in a rock pool on a beach. The aunt was my father’s godmother, and when we were young, and if my parents went away occasionally, my sister and I would stay with her.

The photograph on the bedroom wall intrigued me. I asked my aunt who the girl was and she explained it was her sister, who had died in 1919 of pneumonia. That was how it was left in the family lore until this year, and it was only recently another relative told me that she had in fact died of the Spanish ’Flu. I am not sure why her death was not attributed to its actual cause, but I wonder if one of the things pandemics do is induce shame on the part of those who have lived through them. And so the time is forgotten, a veil is drawn over it.

My last church, St Dunstan-in-the-West, was beloved of historians because it was one of the few city churches with a complete set of parish records. Most others were consumed in the Great Fire of London. Something rather chilling about the Black Death of 1348 and the Plague in the 1660s was that although the records, the so-called Bills of Mortality, recorded many deaths in those pandemics, all too few of those who died are recorded as dying of plague.

Shame and a veil of forgetting covers these periods of great and terrible loss. It is as if the memory is too great to bear. Shame has many causes, some of them very deep. I am not sure but perhaps pandemics, which are very associated with fear, tie in with profound worries we have about divine punishment – certainly most of the prayers, for example in the Book of Common Prayer, have these resonances. We are by no means through this time of trial, and we cannot make definitive statements about it. But there are things we must recognise and do all we can to ensure they are corrected.

We need to remember those who have suffered and died. Most often in the terrible waves of deaths in April to June, the people who died had been in the frontline of care and serving others. They were from the poorest and weakest sections of society, and a disproportionate number came from minority ethnic backgrounds. This was part of what caused an evaluation of our society which was timely, right and important. The lives of those who are most vulnerable, with the least opportunities, and who gave the most, need to be recognised and not forgotten. It was painfully true that black and minority ethnic people were more greatly at risk of death.

There are also many whose well-being has been ravaged by the loneliness, exclusion and abandonment they have felt in recent months. There are so many signs of the inner brokenness all around us. Camden Town seems ever more a place of lost souls, excluded from day care and the statutory services for the vulnerable. Virtual life is not an option for them.  We have to recognise the vulnerabilities in our midst and be patient and compassionate towards them and do what we can respond to them.

The very best response to shame and to despair is hope.

The clock at St Mark’s has been silent for some months, because of the need for significant repair: internally with its mechanism and externally to restore the two clockfaces. The restrictions in the Spring meant that the manufacture of the new mechanism was significantly delayed. We were very sorry that during the quiet months, when the world was hushed and confined, the comforting chimes were muted.

The clock was repaired in time to strike the eleventh hour on Remembrance Sunday. This gave those assembled great comfort in this complicated time of renewed lockdown. We gathered in the garden of St Mark’s, a place of tranquillity, safety and openness. The canal at the garden’s edge fosters a cherished peacefulness, absorbing hubbub and dowsing perturbation. It gives respite and hope to many, and that is no small achievement.

Thank you to those who tend the garden and contributed to the restoration of the clock; we are very grateful indeed.