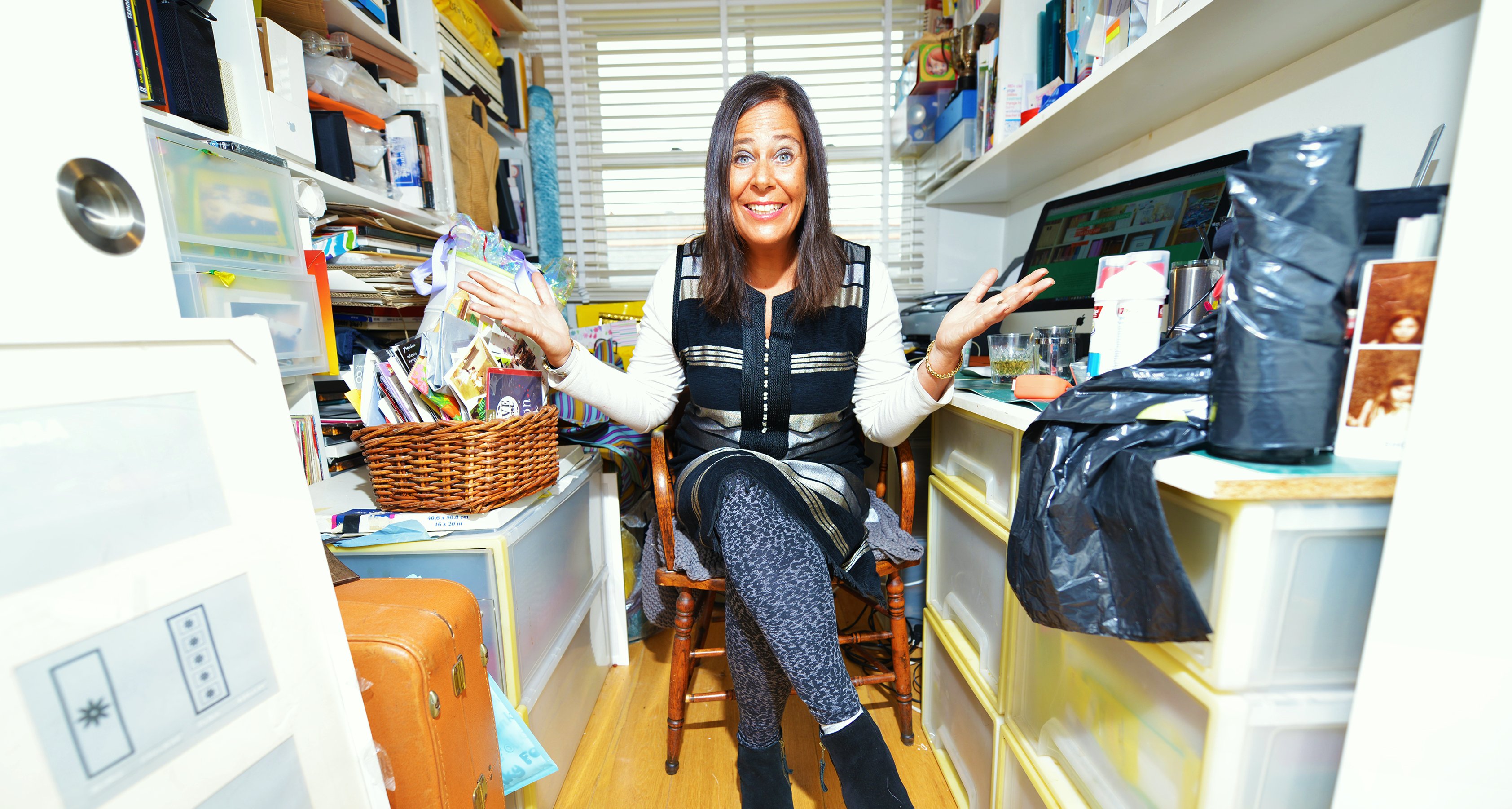 I look down from the Hill and all I see is houses. And each house is full of stuff. You see people pull up in taxis and they’ll have carrier-bags full of more stuff. And then they actually pay someone to help them get rid of the stuff. Beats me. All we do is leave neat little hills of finely sifted earth in the middle of boring flat lawns. Who can complain about that?

Nicola Manasseh is a de-clutterer and home organiser. She was born and brought up in Swiss Cottage where, as a child, she experienced a desire to be neat and organised with her toys. “The way it worked in my family is that, at the weekend, after breakfast, my siblings and I were sent off to our playroom to play until lunchtime. I would insist that before we played anything we tidied up the playroom. I had this very early notion that tidiness equals space equals creativity.”

At eleven Nicola went to boarding school where she had very little space to keep things, other than her school uniform, weekend clothes and tuck. After school Nicola went to York University to read English. She has been a journalist and editor ever since, but these last three years her main business has been de-cluttering.

A de-clutterer will take on any job, however big or small. If you are moving house, a de-clutterer will help you to decide what to pack, organise a removals van and then at your new home unpack everything and arrange your rooms to be comfortable and practical. Nicola mainly works with people who employ her to spring-clean their homes and help restore rooms to their original function. Mostly it takes several visits for cupboards to be sorted through, papers to be filed, and bags of stuff from the past to be finally binned or given to charity.

Nicola explains how she feels about her work: “Your house is your shell. After your body, it’s the second most important thing to take care of. I believe strongly that if you live in an organised home you have more space, you allow new energy to be constantly entering your life and you can feel peaceful and relaxed. Creativity can also be more easily sparked. One time I cleared a spare room which then became a place for my client to make clothes. She set up her sewing machine, and in that new space was able to fulfil her desire to be a seamstress.”

It takes courage for somebody to admit that they are living in a mess and to employ someone to come in, see that mess, and tell them that some of their stuff is junk. What may appear rubbish to a de-clutterer may be something precious to a homeowner. Nicola explains that most of her clients know what is rubbish; the problem is that they don’t know how to let it go. She gives the example of one woman keeping piles of old newspapers in order, one day, to do the crosswords on the back pages. So much stuff is kept for future use – clothes that will fit when you eventually slim down, too many rolls of Christmas wrapping paper, cute boxes that could contain something. There are people, mainly women, who keep every smart cardboard carrier-bag received when shopping because they are beautiful and can be reused. The question is – how many do you need to keep?

Men, on the other hand, often have drawers full of gadgets and cables; but of the fifty or so clients Nicola has seen, men appear more able to part with stuff. What they mainly need is organisation and places to put things.

A common problem that Nicola meets is that a lot of people’s stuff is connected to good memories, or has been given to them as a gift, albeit an unwanted one.

She met one man who had a shelf in his kitchen of about thirty spice jars, bought forty years previously. Although he had updated and had several new spice jars that he was using regularly, he couldn’t bring himself to throw out the old jars because of the wonderful memory of when he bought them. Nicola did two things: she took a photo of the old spice jars to make them immortal, and she gave the owner a week’s warning before she binned them. In another situation, a woman could not part with a bin bag full of baby clothes that her mother had made for her now grown-up children. Nicola encouraged her to keep just her seven favourite pieces and to frame and hang the christening robe. “If there is space to keep mementoes and treasures, I see no reason not to keep them.

What’s important is for my clients to go through their things, dust them, remember what they own, and to understand that even if you let go of something, you never forget it if you are meant to remember it.”

A large percentage of Nicola’s clients are elderly people. “Many old people are thrifty. They have lived through war and hard times and they have learned not to throw things away, and to recycle. But when it gets to the point that you are constantly trying not to knock things over, when you are forced to make piles of books and papers on the floor and the mice and moths are coming to visit, when there is just too much information in your living rooms, and no way into your spare rooms, then you need to make a change,” explains Nicola. One of her clients was still holding on to letters confirming appointments from years before. The intention was to use the blank backside for notes and lists. Unfortunately there was more paper than potential notes to make.

The way the de-cluttering works is that Nicola’s clients sit down (with a cup of tea) and she passes them items to which they will respond ‘keep’ or ‘throw’. Before the end of a session the ‘throw’ pile is put in the rubbish bins and the ‘keep’ pile is put in its proper place in the house, where it can easily be found at a later date. Although the de-clutterer does most of the physical work and takes things to the charity shop, it can be emotionally difficult to sort through too much stuff and Nicola will adapt her pace to suit her client.

Nicola is sensitive to the history that directs the way people live in their houses. “I had one client, an old man. His place was full of papers and books. He had been married, his wife had died and he had two single beds in his bedroom, one for sleeping on and one covered with books. He wanted to move all his papers and books to the office. He was in his 80s and still working as an economist. When I returned for our final session I saw that the books were back on the bed. And I realised that they needed to stay there because it must have given him comfort to wake up in the morning and see those books, with his wife having died and his work being his life.”

If you are interested in Nicola’s de-cluttering and home organising services, please contact her at nicolamanasseh@gmail.com or  Tel: 0734 063 2689. More information at www.nicolamanasseh.com

By the The Mole on the Hill
Photography by Sarah Louise Ramsay slrphotography.co.uk