A Wizard Chef Dedicated To His Craft 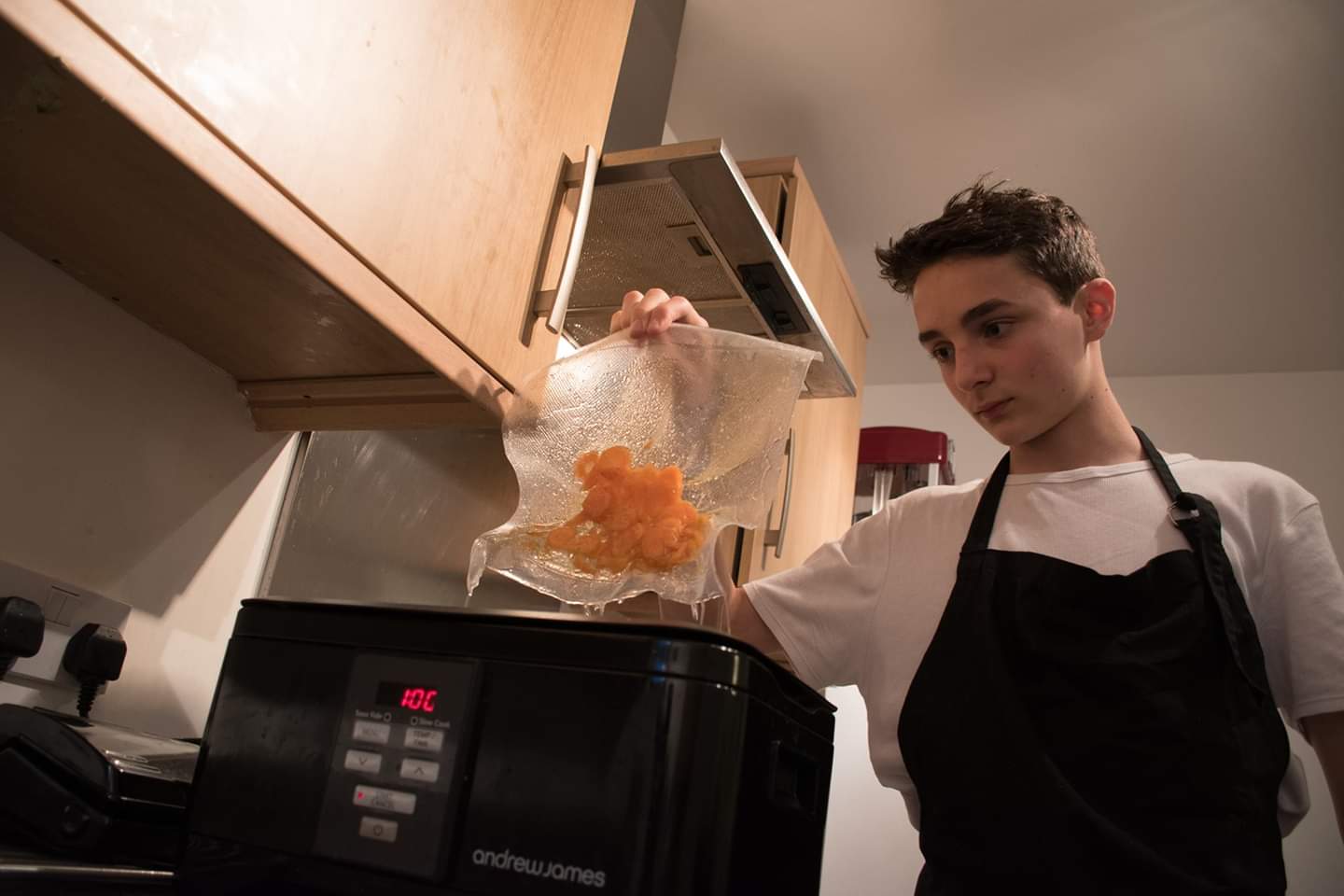 Daniel Adams started being passionate about cooking when he was a child; and now, aged nineteen, before lockdown occurred, he was a chef at the Michelin-starred restaurant Marcus at The Berkeley, Knightsbridge. Becoming rather an oddball amongst his peers, at about fourteen years old Daniel created a regular Supper Club in his home, which involved clearing the furniture out of his bedroom, setting up a table there and serving a six-course meal to family and friends, with his mother’s friends helping him as waiters and waitresses.

Inspired by Heston Blumenthal, the celebrity chef who brings a scientific understanding to cooking, and with an A star in GCSE Catering, Daniel started his career by working at Marcus four days a week while studying at Westminster College and avidly reading cookbooks. Up to the lockdown, from his home near Primrose Hill Park, he cycled to Marcus Wareing’s flagship restaurant where he cooked in a variety of the kitchen’s sections. His recipe for marjoram milkbread, inspired by Japanese cooking, is already on the restaurant’s menu.

When I met the humble chef, as with all late March conversations, we couldn’t not talk about Coronavirus. I was sad to hear that because people were not dining out, Daniel’s hours had just been significantly reduced. Rather than showing any sign of anxiety, he was sympathetic to the restaurants and hotels that have had to close for months or for good. Despite the current uncertain situation Daniel has a solutional attitude and believes that out of the darkness will come new ideas and opportunities for him. “We need to focus on positives,” he said. “We will get through this time. And on the bright side, as less meat is being imported from Europe, fewer animals are being killed. Also, I’ve seen aerial images of countries like China where smog is decreasing. Personally, this situation is forcing me to be more creative.”

I questioned Daniel for some tips about being resourceful in the kitchen, especially as I still wanted nutritional meals rather than panic buy tinned food. He talked about freezing home-made dishes; and not just soups, but any pasta or rice-based dish. He suggested using vegetable trimmings for broths, and meat or fish trimmings for stock. As we’re less mobile in isolation, he also advised avoiding fried food. Last night I made his roast potatoes, ever so crispy but fluffy inside, which are the most important part of his favourite meal – the Sunday roast.

For those of us who are vegetarian, he shared his trick for making vegetables consistently delicious: “Don’t be afraid to cook them in a lot of unsalted butter in a pan with a lid, as you’re only using the butter to cook them in; afterwards you can keep the excess butter in the fridge to be reused, even if it has bits of broccoli or other vegetables in it.” Daniel’s crescent slices of butternut squash browned on each side and spiced up with chili flakes, thyme and/or rosemary are on my to do list.

Daniel has always been an advocate for supporting local businesses. He sees the bigger picture, by which local greengrocers or butchers can support smaller farmers; and even though supermarkets generally offer cheaper prices, this pandemic is changing that

Troubling times or not, Daniel has always been an advocate for supporting local businesses. He sees the bigger picture, by which local greengrocers or butchers can support smaller farmers; and even though supermarkets generally offer cheaper prices, this pandemic is changing that. We discovered that both of us buy from the stall outside Finchley Road tube station, where the fruits and vegetables are so reasonably priced. For people who can’t leave their homes, Daniel told me that many of the food suppliers like Natoora, who normally just deliver to restaurants, are now also doing home deliveries.

One day Daniel would like to open a restaurant in the middle of nowhere, using local supplies and providing rooms for the diners because his place would be a destination restaurant. He’d also like there to be magic at the table with dishes that surprise and delight his clients, as he’s experienced in Michelin three-star restaurants like Heston Blumenthal’s Fat Duck or Alinea in Chicago, which is regarded as one of the best restaurants in America.
In the meantime, with reality being the focus of our meeting, Daniel talked about parents coping with their kids at home all day and how to get the children into the kitchen and interested in cooking. “You need to keep exposing young people to food. You can do this by connecting their interests or favourite toys to recipes. I call this storytelling with food. Also, when siblings cook together they learn communication skills, as well as the importance of preparation and patience.”

But what about the parents, I asked him, who despair of the mess that kids make as they bake? “Well, the number one rule is that if you’re going to cook, then you have to clean up too. It’s not just about health and safety – a clean space is a clean mind and great food,” he smiled.