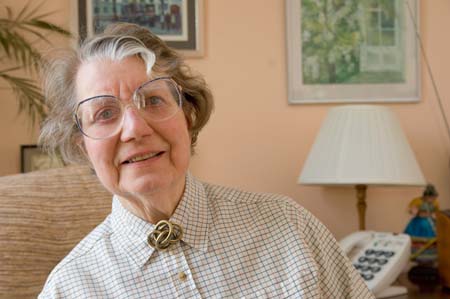 The oldest of three girls, Jean was born and raised in Tottenham. She was a bookworm from a very young age and maintained her love of books throughout her life, latterly listening to talking books, a favourite of which were crime thrillers. Among Jean’s other interests were poetry, music and the theatre. Jean was a regular attender at the Regent’s Park Open Air Theatre season.

Jean attended Oxford as a mature student and was extremely proud of the degree she got there.
Her career saw her break through the proverbial ‘glass ceiling’ eventually working for the Council for National Academic Awards before becoming Dean of Education at North East London Polytechnic. After moving to Primrose Hill Jean became devoted to the area and was always involved in local events and organisations, notably as a governor of Primrose Hill Primary School and Chairwoman of the Primrose Hill Community Association.

Later, when her sight began to fail, Jean got involved with and then became Chairwoman of the Visually Impaired in Camden (VIC) in 2008. Members familiar with the discipline Jean kept will remember the gavel which made regular appearances at VIC meetings! Jean stepped down from the post in 2014 in order ‘to give someone else a go’. In 2008, Jean became a Camden Council EPIC – Exceptional People in Camden – awards finalist in the Exceptional Older Person category.

Among many attributes Jean was noted for her ‘hospitality’, ‘generosity’ and ‘kindness’. Friends describe her as ‘caring and busy’ and ‘dedicated to making Primrose Hill better for everyone’.

As her sight failed, Jean staunchly resisted moving to a retirement home and she died in her own home on Saturday 10 October 2015.

In Jean’s own words: “I’ve had a truly wonderful life”.