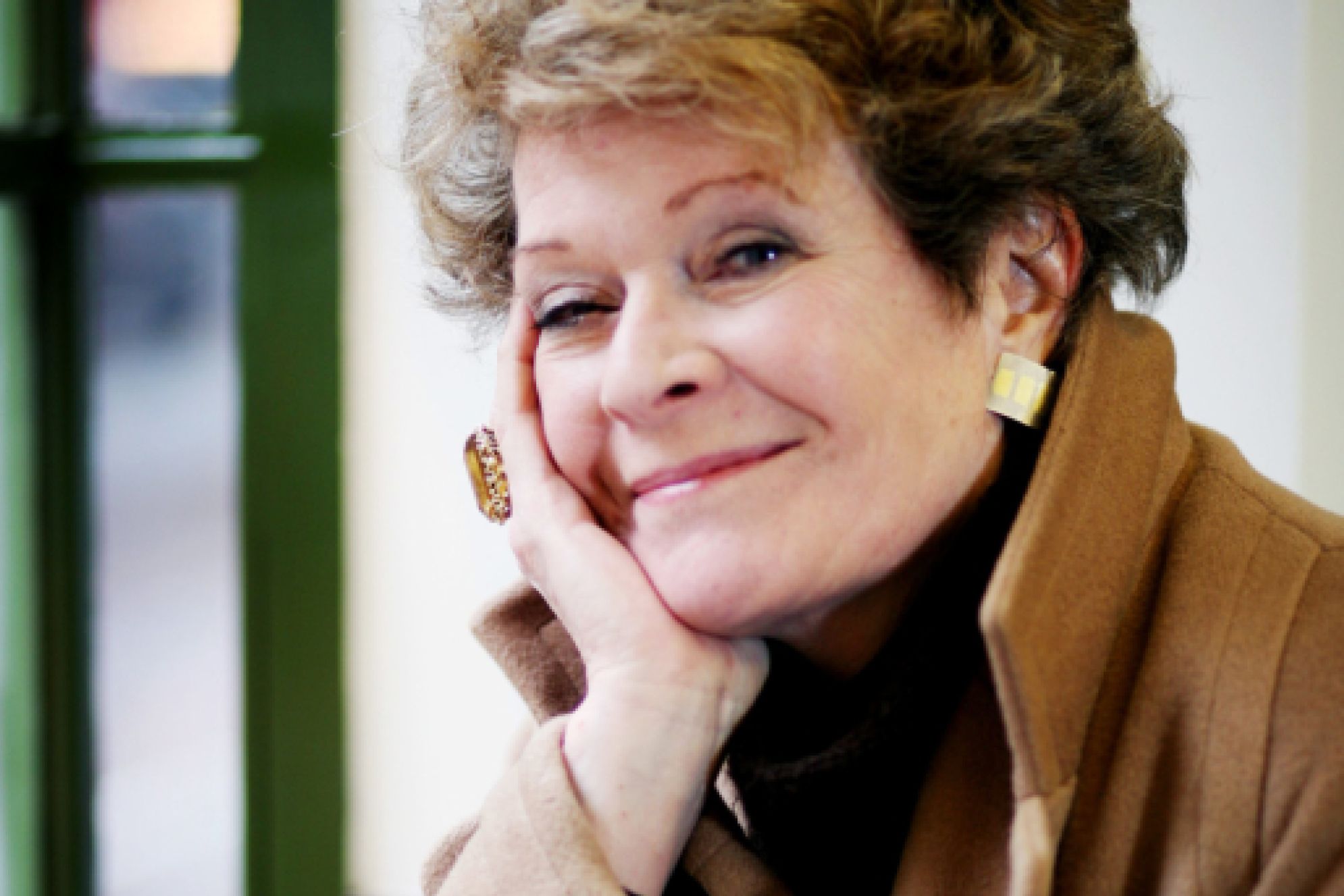 Children from Haverstock School’s journalism course interview Dame Janet Suzman on playing Sheila in A Day in the Death of Joe Egg by Peter Nichols and Cleopatra in Shakespeare’s Antony & Cleopatra.

Dame Janet (DJ): The difference between a mother who has a child that is very, very sick and a queen about whose children we know nothing is a very great difference, but what do they have in common?
Haverstock School Students (Us): Mothers. They love their children…
DJ: Well, I have no proof that they don’t, but I would be looking for their differences. If you only like people who are like you, maybe that’s a bit limiting in life? [Pause] You’re not able to answer that, but perhaps sometimes it’s important to meet people with whom you disagree? So that you can hear how they think.
Actors are taught to speak the words that a writer wrote on the page as if they have thought of them themselves. You bring somebody else’s words to life. And you do that by …? Have a guess.
Yasmeen: If it was a happy line, I would have a happy mood; but if it was a stressful line, I would be as if I was stressed and think: what faces would I make?

DJ: So that’s acting from the outside. But I would like you to think about acting from the inside: your feelings, rather than how something looks. For instance, have you ever seen somebody say, with no smile on their face: [emanating sadness] “I feel really happy today”?
Us: No…
DJ: Well, perhaps you haven’t noticed, maybe. Or somebody goes: [becoming a puppet] “Oh, I’m so sad! Oh, I’m so happy!” Because that is very, very boring!
Anybody know what antithesis is?
Us: No…

DJ: Something pulling in an opposite direction. Antithetical things happen a lot in poetry. Somebody like Shakespeare would say: “I see cold fire!”
Yasmine: Gets ’em thinking.

Dame Janet on her OBE:

DJ: I went to Buckingham Palace and I was as smart as I could be. I am not really smart today. For the Queen you have to.
When my name was called out, I had to walk straight towards a dais and turn and face the Queen. Somebody had a cushion, and on it was a wonderful enamelled medal. I already had a little pin fixed to my coat, so then the Queen smiled at me, picked up the medal, leant forward and hooked it onto that pin,

Yousuf: [performing] In the name of God and St George, I knight you.
DJ: Well, I think she does that for the gentlemen, but a sword on a lady’s shoulder would be a bit odd.
Yousuf: Our research said you played the Mother Superior in Nuns on the Run.
DJ: Well yes, she was really funny.

[ Noticing Yousuf’s copy of Shakespeare’s Antony & Cleopatra ]:
DJ: So what did you get out of this?
Yousuf: Well, I’m not going to lie. I haven’t read all of it yet. [Being Cleopatra with silly high voice] “Oh tell me, he hasn’t married Octavia, and I will give you gold!”
DJ: [chuckling] Oh, the WhippingBoy speech. I think we should read it together! [She finds the scene]
[to Yousuf] This is very, very scary news. Don’t give anything away. Don’t move your face. Because she is the Queen [as Cleopatra]: Bow. [Yousuf bows] No! Really bow a deep bow. Respect! Aren’t you taught to respect your elders? You respect your Granny and your Grandpa? Don’t you? You respect Cleopatra and you don’t know how she is going to behave. So she says:
“Ram thou thy fruitful tidings in mine ears. That long time have been barren.”
Yousuf: [as Messenger] “Madam, madam…”
DJ: He can’t say anything else because he doesn’t know what to say. He thinks, I’ll just keep quiet. So she leaps to a conclusion:
[as Cleopatra] “Antonius is dead!”
You know that’s not true, so that’s OK. But there is worse to come. Why?
Yousuf: Because Antony has got married to Octavia.
DJ: That’s really bad news; but that’s really bad news. [Silence] So he just says: “Madam, madam.”
Maybe he gives a secret smile: “No, he’s not dead.” Don’t show it… Let’s see it in your eyes.

Yousuf: I can’t act…
DJ: Yes you can. Everybody can act. It’s about your imagination. Acting is what we do in life: it is self-preservation to save your own pride and dignity.
Yousuf: “Good Madam, hear me.”
DJ: But you still can’t bring yourself to say what has happened, so she says:
“There is no goodness in that face.”
He is letting the news out, very slowly, bit by bit…
Yousuf: “First, Madam, he is well.”
DJ: Lovely. You used an upward inflexion. He is thinking – it is coming that I haven’t told the whole story yet. Cleopatra is a very powerful lady and she loses her temper with him. I can’t do this in the library, it will be too noisy. The character goes into himself. Self-preservation. Think about that.
“How can I best make myself safe?”
You don’t want to be bullied in the playground. Do you understand that?
Yousuf: Yes…
DJ: So this is another slant on acting. Why? Because human beings are complicated, so fictional human beings are also complicated.
Well done! Well done! Was that a bit scary?
Yousuf: Yes…
Us: Thank you, that was great.