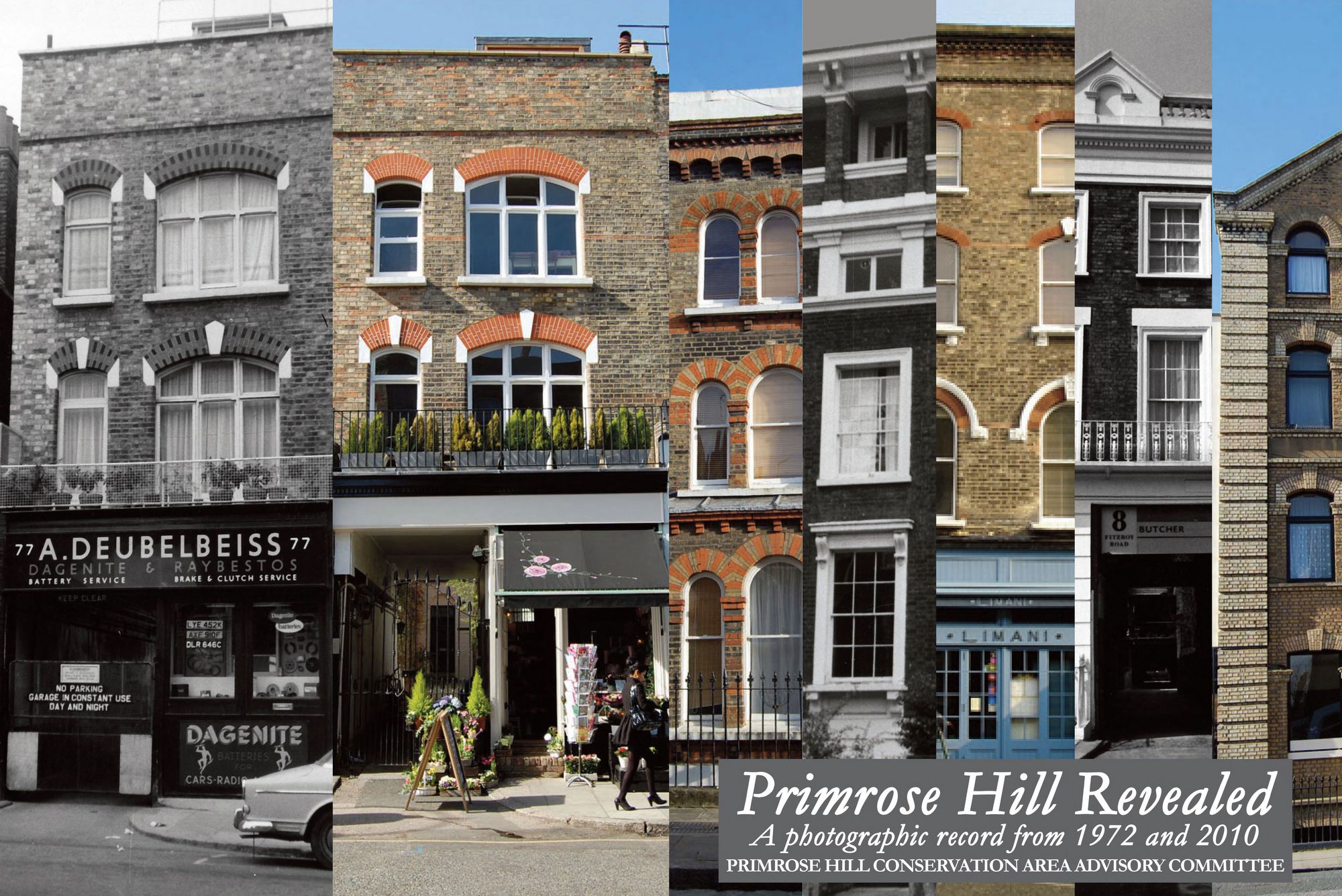 The Primrose Hill Conservation Area and its committee (PHCAAC) were set up in 1972 as the result of a campaign by Camden Civic Society sparked off by the demolition of fine houses in Gloucester Avenue – now Darwin Court.

The PHCAAC consists of volunteer nominees from organisations formally decided upon by the Council, although the committee makes its own choice.

The Committee meets every fortnight to examine all planning applications within the area, with the comments going to the relevant planning officer and appearing on the public online Council record. For an appeal against a decision, we present advice to the government inspector deciding the appeal. We are currently producing a public access database of all recent past and present planning applications in the CA for which we are seeking funds.

Because we see every application made in the area, the Committee’s advice is based on an overview of the development of the conservation area, and its current and historic character. We can identify new pressures for development, and how each change contributes to the changing character of the area. As locals, using our streets, open spaces, shops, cafes and restaurants, we are in a position to monitor the results of new development, and try to make sure that one person’s lively activity is not another’s nuisance. Successful new development relies on neighbourliness, and confidence that no one will be damaged by change.

we are in a position to monitor the results of new development, and try to make sure that one person’s lively activity is not another’s nuisance

Our main job is to consider whether each application would ‘preserve or enhance’ the character and appearance of the conservation area – the legal duty on planners in CAs – and we interpret this broadly. We see keeping jobs in the area as vital to its character, and have successfully opposed a number of attempts by developers to provide flats by destroying workplaces. Primrose Hill never became merely a residential suburb: the areas beside the railway and behind the houses provided an opportunity for a rich mixture of living and working accommodation, and this has enabled the lively mixture of cafes, restaurants and specialist shops to survive and prosper. Keeping small flats and ensuring that there is ‘affordable’ housing in the area are also priorities.

The Committee has enjoyed important successes. Hopkinson’s Place and the Community Centre were the result of an early victory, as was the crucial evidence provided to help local residents win in the Court of Appeal over an attempt to destroy the former Boy’s Home Chapel and to coordinate the campaign to defend local business from the globalised threat of Starbucks. We helped block plans to give London Zoo ten acres of Regent’s Park. As a community we have a hard-earned reputation for fighting for our area and our community. The PHCAAC has often been at the forefront of such fights.

We see keeping jobs in the area as vital to its character, and have successfully opposed a number of attempts by developers to provide flats by destroying workplaces

More recently, the Committee has led the campaign to keep Utopia Village as a small business hub, worked to keep the Bibendum building open as offices, an education space and art gallery, coordinated local responses to modify and restrict the plans for the Morrison’s site, and contributed to restraining many applications from harming our area. The Committee also organises public meetings when necessary on important planning issues. People enjoy living in Primrose Hill, and many more want to do so, in part because of the successful protection of our environment.

In working to conserve the area, we take an active part in encouraging good modern design, consistent with the scale and texture of the area, and recognise the need for such buildings to be good neighbours to the old. Meeting new standards of sustainability – from reusing existing buildings to ensuring energy efficiency – is a vital consideration.

The Committee also takes a larger view. We are consulted by authorities on a wide range of issues: from plans for Camden High Street to licensing. Although the use of cars has devastated some areas of London, neglect of the transport infrastructure has made it hard for people to identify practical alternatives. We are not isolated from the effects of these larger issues, and give advice on how they affect us too.

We are always happy to hear from members of the community about their views on new plans or fears that a development may change the area, or that building work is being done without the necessary permissions.

We work actively with the Council’s Planning Enforcement, often informing them of changes to buildings of which they may be unaware, and act as their eyes and ears on the ground. Recently we have reported on the destruction of the top front parapet of a house, of a new first-floor conservatory, of modern changes to a historic shopfront, of a garden wall bordering the pavement raised with inappropriate decoration, of a new back garden extension and of exterior lamps on a group of listed building frontages, none of which had planning permission.

PHCAAC can be contacted via its chair, Richard Simpson, at [email protected]