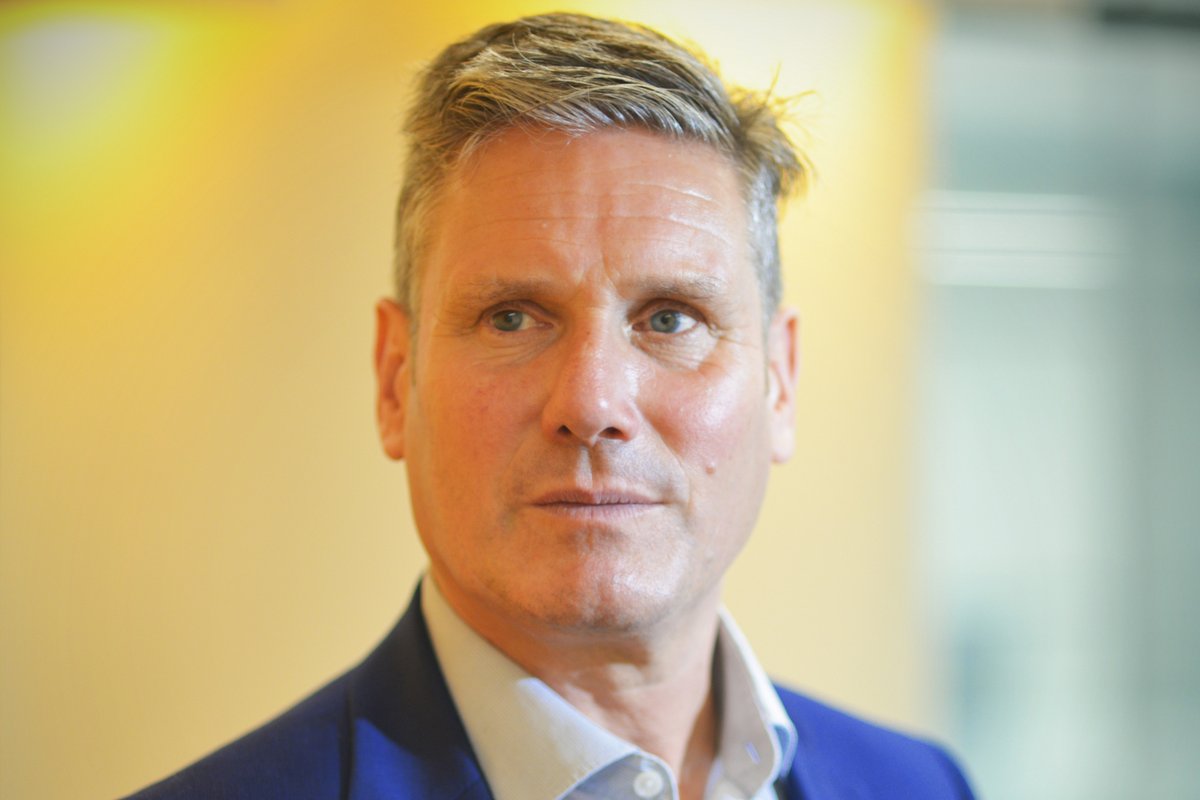 Our local MP Sir Keir Starmer has had a busy couple of years, with much of his focus on Brexit. In an exclusive interview for On The Hill, he talks to Micael Johnstone about some of the key issues that impact on our area ‒ and how his beloved Arsenal will get on this season.

A lot has happened in UK politics since Sir Keir and I last met two summers ago. As Shadow Brexit Secretary, Starmer has been at the heart of one the most divisive and challenging issues to have faced the UK in recent history. Having left a successful career as a lawyer to serve in politics, you can sense his frustration that Brexit has got in the way of his desire to make Britain a better place. Brexit has been such a fraught and frustrating process that I had expected Starmer to be exhausted; but he breezed into the room for our interview with a beaming smile and full of positive energy. Starmer is remarkably down-to-earth, considering he’s one of the most high-profile political figures in the UK (and tipped by some to be a future Prime Minister).

With Parliament in recess, he’s about to head off on a family holiday to Devon ‒ and he asks On The Hill photographer Sarah Louise Ramsay for some tips on the best route by car. In an era when many politicians seem more motivated by power than the national interest, he stands out as someone who’s genuinely passionate about the major challenges of our time: from inequality to climate change.

I ask Starmer what his personal priorities are for the coming months. “Nationally, we must do what we can to sort out the crisis of Brexit; and to do that, we need to rebuild Britain,” he says. “I am convinced that, over the last ten years in particular, on any measure, inequality has got deeper and deeper across the United Kingdom. So let’s deal with the immediate crisis of Brexit, but actually move on to do the much more important stuff of rebuilding Britain, which is what I thought I was coming into politics for. I thought we might get the chance to talk about public services and health and rebuilding the economy and regional investment, but we haven’t really done enough of that yet.”

At a local level, environmental issues and HS2 continue to be a major focus. He’s been encouraged by the recent rise in public awareness of climate change, and credits Extinction Rebellion and the youth protests with playing a big part (he therefore believes that the voting age should be lowered to 16). “In the constituency, the priorities are very driven by the challenges that are out there. If you just take the major issues where I’m trying to focus energy at the moment, they are air pollution and climate change, which are very real in Camden. They are a major cause of concern throughout the constituency,” he says. “Air quality is a massive issue across the whole of the borough,” he adds. “Obviously the Euston Road is a problem, but if you go to any of the major junctions, pretty well across Camden, you’re going to have an air quality problem. I’ve been a supporter of the council’s plan to try to tackle that; it has a number of aspects to it, including doing something about school drop-offs. So many families drive individual children to schools, when they could walk. There’s no issue with public transport in Camden. There’s an initiative by Camden to close parts of Camden High Street for a while ‒ the idea of making it an environment where the car is not king is really important. I think there is quite a strong sense of an intergenerational problem; Brexit is one example of that, and climate change is another. Younger people are going to have to live with the outcome of both of these for longer than the rest of us.”

I am convinced that, over the last ten years in particular, on any measure, inequality has got deeper and deeper across the United Kingdom. So let’s deal with the immediate crisis of Brexit, but actually move on to do the much more important stuff of rebuilding Britain, which is what I thought I was coming into politics for

End of the line for HS2?

“HS2 is linked to the issue air quality, and also it’s bringing devastation to everybody who lives in and around Euston, and anywhere that’s going to be affected by all the construction work,” says Starmer. “It’s already begun. There are the known problems, of the lorries, the destruction of buildings, the moving of people; and then there are the unknown problems, like the displacement of quite a lot of anti-social behaviour from around the station into other parts of the nearby streets, which has caused major concern.”

Starmer is involved in a number of forums for local people to discuss HS2, to challenge the government on their behalf and to ensure that they receive adequate compensation. I ask him whether he thinks the project might ultimately be cancelled. “Well, every now and again there’s talk of the money running out or that the priorities will change. But at the moment I think we have to operate on the basis that it’s going ahead and therefore keep up the challenge on things like compensation and the disturbance. I think Boris Johnson said something yesterday about it still going ahead, although what he says one day doesn’t necessarily carry into the next!”

Starmer believes that the vast amount of money being spent on HS2 would be better spent on improving existing rail networks; but he recognises that there are differing views in the Labour Party. “There are some, like me, who don’t think the project is sound, and that it shouldn’t go ahead. For that reason, I voted against it. On the other hand, if you look at the voting record of Labour MPs when the HS2 bill was going through, the vast majority voted in favour of it. It seems to me that that’s unlikely to shift.”

Knife crime has risen across London, and Starmer says he’s spending much of his time on this issue. While some politicians might reach for easy platitudes about tougher sentences and better parenting, Starmer takes a more nuanced view. “We’ve had the tragedy of two young men stabbed to death a year ago in February; and then Calvin Bungisa, another young man, was stabbed to death in Kentish Town just a few months ago. We’ve been running a Youth Safety Taskforce, the point of which was to draw the different responsible people together and come up with some recommendations; which we did – practical recommendations for Camden. Now we meet every other month to action those points and to put money into really quite interesting projects, such as dealing with vulnerable children at school. We’re concentrating on how to make the environment safe for young people, which is a massive challenge. The rise in knife crime has been a real problem for us.”

He has a “very good” relationship with London Mayor Sadiq Khan, and also works closely with Georgia Gould, the Leader of Camden Council. “What we try to be really conscious of is the fact that it’s very easy when you’re dealing with things like knife crime and youth safety to apportion the blame on everybody else. People are slower to say, ‘What action can we take collectively?’ It’s that angle that we’re trying to work on at the moment. It’s really tough. It was a huge blow to all of us when, having worked on this for 18 months, we had another fatal stabbing. In other words, whatever we’re doing, we’ve got to hold it up to the light to check that we’re doing the right thing. We have to remind people constantly that, actually, Camden is safe. It’s a diverse, vibrant, fantastic community, and that’s how almost everyone experiences it. But there are these pockets of violence that, in the end, have to be tackled. The more you scratch away, the more obvious it is that it’s inequality of every sort that lies behind it.”

Funding for youth services and educational support has fallen significantly since the 2008 financial crisis. I ask Starmer if he thinks austerity has played a role in the increasing violence. “I wouldn’t attribute any one cause to this; but it doesn’t therefore follow that funding is irrelevant, because it’s not,” he says. “It operates at a number of levels. Although the police will always say that they’ve got enough resource, because they will manage with what they’ve got, it is obvious that too much money has come out of the police service, and that they don’t have the resource that they need to do everything that they should be doing. I wouldn’t say that’s the sole cause – put the money back into policing and the problem will go away – not at all, but we can’t pretend that there’s not a link between cutting resource out of police funding and the challenges we have with youth violence.

“The same is true for youth services provision more generally. Camden has struggled really hard, because of massive budget cuts, to maintain youth services across the borough. If you look at schools, the per-pupil funding has gone down. Schools are struggling. That means that support isn’t there for the individual child,” he continues. “This is a generalisation, but it’s true that if you want to trace which children and young adults are probably going to end up in the criminal justice system, and ultimately in prison, you can usually trace that back to whether they were having difficulty at primary school, and whether they were being excluded at secondary school.”

As Starmer is about to take some well-earned time off from tackling society’s major challenges, I turn the conversation to less serious matters. Where does he like to spend time when he’s not working? “The Heath, the Heath, the Heath,” he says with great enthusiasm. “It’s just fantastic. We go there with our kids all the time. Waterlow Park is also fantastic. Regent’s Park is very beautiful. So we’re really lucky, in Camden, to have those open spaces; and you need them. We’ve got The Pineapple near us, which is the greatest pub in the country. Also, although I suppose I shouldn’t be advertising one place over another, the Vietnamese restaurant, Pho Ta on Willes Road is brilliant.”

Starmer is an Arsenal season ticket-holder and takes his two children to the games. I ask him how he thinks his team will get on this season. “I saw that the Guardian predicted that Arsenal are going to get sixth. We’ve got to get top four. This past season was particularly frustrating, because the pattern for the last eight or nine years was that we’d start well, get a bit optimistic around Christmas, and then start losing heavily soon after Christmas into January and a bit of February, to a point where we can’t really win anything; then we rally at the end of the season and have a final flurry, normally nipping past Tottenham. This year we did quite well until about February or March, and then we just started to lose games. The last few games were started by handing out three-goal leads to the opposition and seeing if we could catch up, and of course we couldn’t. So we’ve got to improve on that. Would I put money on top four? I want top four, but would I put money on it? Yes, I would.”