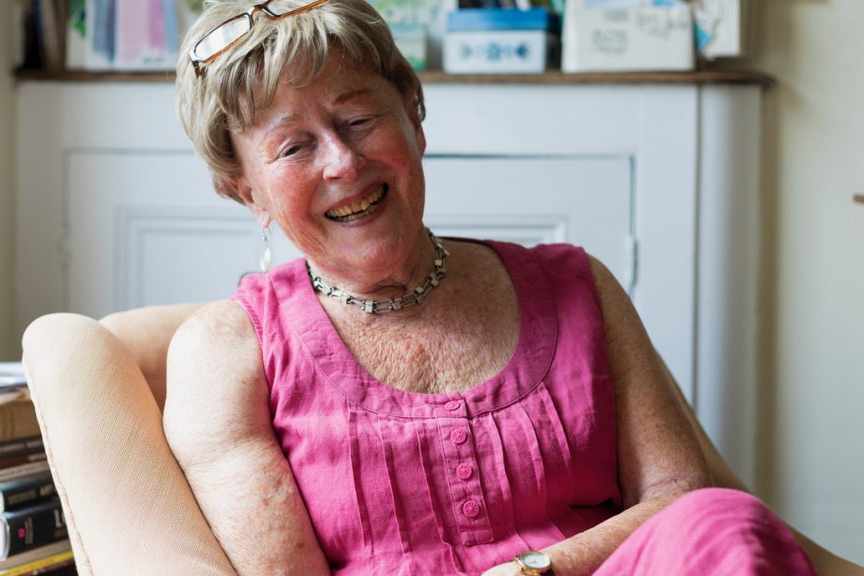 Judy Hillman, 85, a stalwart and much loved member of the Drawing London sketching group, was taken ill while hanging an exhibition of her own work for the Primrose Hill Art Trail in Primrose Hill Community Library on Saturday 1 August. She was rushed by ambulance to the Royal Free Hospital, but sadly died following the insertion of a stent.

Revealingly, in a recent recorded chat with a friend and photojournalist Mimi Feunzalida, on how Judy had found the Covid-19 lockdown, she said: ‘I don’t like to think of myself as an artist.’ She clearly did not enjoy the enforced seclusion, as she happily recalled how in normal days she would work as a volunteer at PHCL, play tennis at the Hurlingham Club, do yoga at The Hub in Regent’s Park, faithfully attend lectures and lunch at the Athenaeum Club.

Judy continued: ‘I’ve been here in Primrose Hill 50 years. Yes, wow, that would be 1970! I didn’t raise a family. I was a journalist for years which I enjoyed so much and I never really had time to get involved with people. I was involved with the world.’

And so she was. Judy engaged avidly for over five decades in her chosen journalistic career, first with a trade magazine Public Works, then Muckspreader, Woman, the Evening Standard, the Observer and the Guardian, for whom she was planning correspondent. Thanks to the paper’s archive service, it is possible still to access Judy’s output. In a memorable piece published in March 1970, called ‘London glamour masks fading quality of life’, she described how signs of ‘an urban malaise’ could be detected and ‘most Londoners know that the common pace of life gets increasingly difficult and exhausting. New families continue the exodus to a life beyond the green belt. More open space is nibbled off for roads. Planes bellow their way into Heathrow Airport, London. The crime rate has risen. Bad development proceeds apace.’

Judy had a wartime childhood. Born in Seaford, on the Sussex coast, with an elder sister Rosalie, now 91, the girls were evacuated to Canada in 1940 on the Duchess of Richmond – the ship that followed was torpedoed. If not a precise version of Anne of Green Gables, their new life was full of the great outdoors, where they learned to ski and skate. They went to a small and, according to Rosalie, ‘very good’ school at Rockcliffe Park, a suburb of Ottawa. Summers were spent at a cottage – without toilet or running water — in Larrimac in Quebec. Rosalie’s daughter, Anthea, reveals that Judy was currently researching a book on the evacuee experience and had already accumulated a lot of material.
But back they came to Sussex, where their father had survived both the battle of El Alamein in Egypt and the bombing of his solicitor’s office in Seaford. Their mother had spent the war in the Wrens. Both girls initially found life in England to be comparatively restricting. After attending Brighton and Hove High School, Judy won a scholarship to Roedean School and eventually became Head Girl. From there she went to St Andrews University to read economics and moral philosophy.

After graduating, Judy quickly got into journalism and in a significant move joined the Bow Group, a Conservative think tank launched by Geoffrey Howe MP in 1960. Judy got on well with Geoffrey and Elspeth Howe, often making up a bridge four at their home. This led to her being invited to join them at their gorgeous villa in the south of France for several summer holidays during the 1970s and ’80s, and where there was more bridge while Geoffrey ‘worked’. Rosalie chuckles appreciatively as she remembers Labour’s Denis Healey’s description of a political attack by Howe ‘like being savaged by a dead sheep’.

Throughout her life Judy had the misfortune to suffer from a debilitating condition called Epstein-Barr. This was related to glandular fever and would keep coming back, on one occasion causing her to stop work for a year. She kept her struggles private and managed her energy output carefully, often turning up for Drawing London sketching events a little late, but always managing to find the group with a cheery smile no matter how obscure the chosen venue.

Judy’s professional life involved studies of St Katherine’s Dock, London Docklands and Cardiff Bay, on which she authored three reports for the Royal Fine Arts Commission. By virtue of a friendship with one of the environment ministers, Judy was co-opted onto the Royal Parks Review Group for a five-year spell. Other public contributions came from working with the London advisory committee of English Heritage and the urban parks advisory group of the Heritage Lottery Fund.

She was currently a patron of Friends of Regent’s Park and Primrose Hill.  Judy loved living in Primrose Hill, as she said in her interview with Mimi in June this year: ‘It’s terribly good here, as good as it gets. We’ve got local shops, we’ve got Camden, reasonable tube and bus connections. It’s wonderful!’