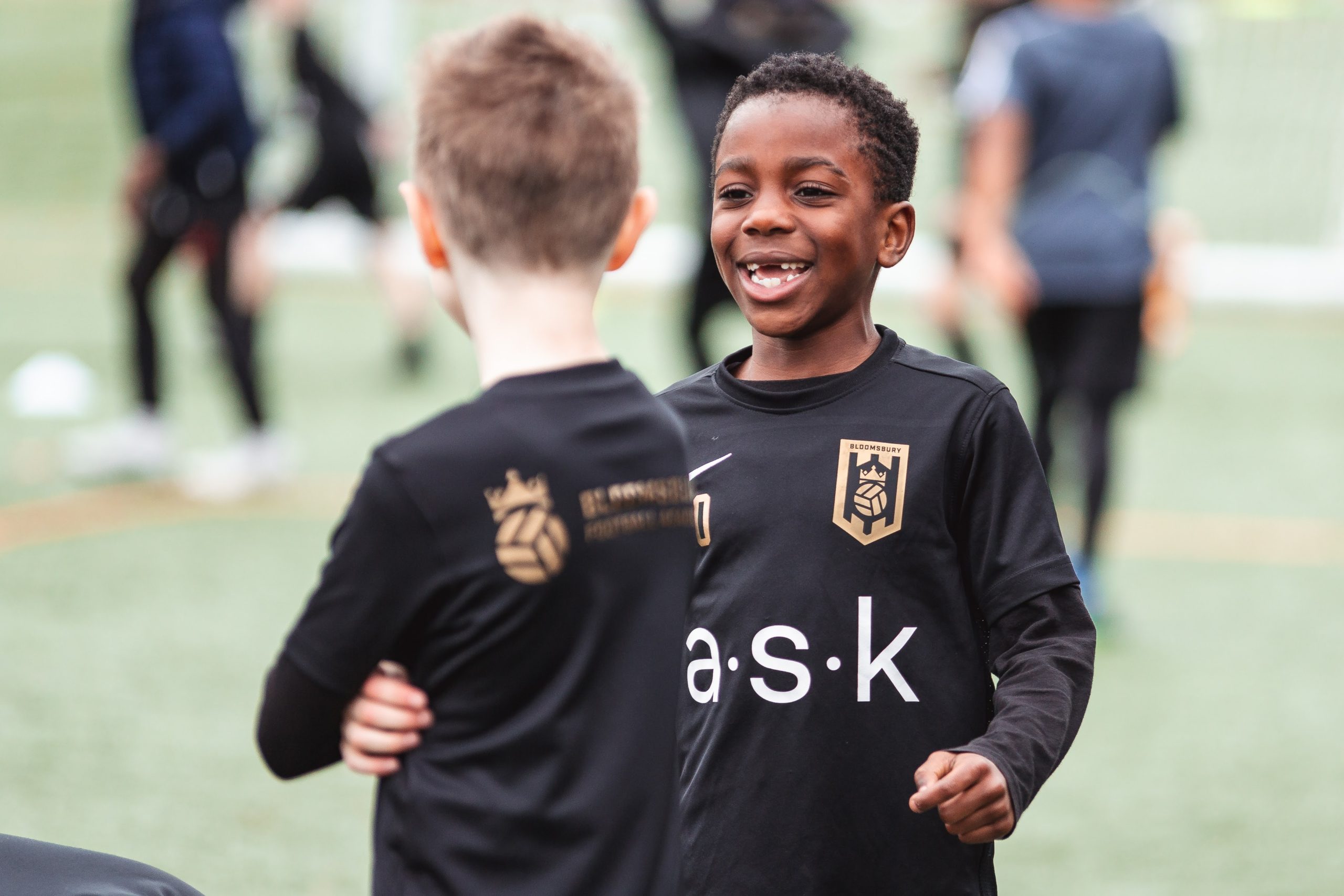 I spent many lockdown afternoons playing football with my godson Joe in the street outside his home, both of us focused on being accurate in our passes so as to avoid banging parked cars. I loved watching him become animated as we kicked the ball, and especially when I would ask him to show me his ‘epic’ skills. I was really disappointed that, as for all youths, Joe’s after-school football sessions had been suspended. So when the chance came for me to interview Charlie Hyman, CEO of Bloomsbury Football, I readily agreed and took Joe along with me.

Charlie is an inspiration for anybody about to finish formal education. Three years ago, he was sitting in Greenberry Café, local to his parents’ home, revising for his final exams at the University of Nottingham. Two fathers whose sons had received football coaching from Charlie whilst he was a student happened to enter the café and asked him what he intended to do when he finished his degree. That chat led Charlie to establish Bloomsbury Football with those two parents as founding trustees. In the beginning Charlie was a full-time coach whilst running the organisation. His main ambition was to bring children of all backgrounds together to create a club that would be inclusive.

Today, Bloomsbury Football engages 3,000 young people every week between the ages of two and sixteen, including thirty-five teams competing in local junior football leagues. There is a pool of around thirty coaches who visit primary and secondary schools, community centres and housing estates to provide football training sessions. Bloomsbury also run three football camps in London, available to children on holiday weekdays. At the Academy, keen young footballers can develop their play with training available three or four times a week.

Six months ago, Charlie launched a programme for girls-only teams, although there has always been the option for boys and girls to play together. “Usually when children play football,” Charlie explained, “they mostly interact with their school mates and that is not always diverse, especially if they attend a fee-paying or religious school. I hope to encourage a child to grow alongside somebody who may have a completely different background. Once young people understand differences, that’s the first step towards empathy.”

Charlie is very much invested in nurturing his football coaches, some of whom are sixth-formers. When I asked him what makes a good coach, he chuckled: “To make the coach’s role not need to exist, although it will always exist.” He told me how kids look up to their coach, sometimes as if they are celebrities, and so these role models have the chance to show children “how to take ownership over themselves”. For instance, through the example of being consistently punctual and always arriving to a session with the correct equipment, the children can learn this behaviour from their coaches. Self-reflection is another requisite in Charlie’s opinion. “I want the coaches to review each and every session and ask themselves what did and didn’t work and where they need to develop.”

Needless to say, Charlie has always loved football, and it turned out that he and my godson support the same team. Charlie remembers playing football in Primrose Hill at the end of a school day and feeling blessed that the park was his ‘garden’. One of the main challenges that he has with Bloomsbury Football is finding spaces to hire, because most sports halls, recreation centres and park pitches are fully booked, sometimes years in advance.

In order to make sure that children are not priced out from his foundation, Charlie has a sliding scale of prices based on what parents can afford. “No child is turned away because of their financial background,” he explains. Presently he is organising Bloomsbury staff to raise £30,000 so that they can offer bursary places across the programmes. Charlie has set himself the target of running five kilometres every day for fifty days: “That’s about the length of Regent’s Park’s Outer Circle.”

Charlie’s parents think that he’s a workaholic, but the truth is that he really loves his job, even the administration aspect of it all. “The real reward is to see the joy the children get from having proper football training and to know that the coaches are also getting a real opportunity.” At some point during the interview, my godson shyly asked Charlie which football players he admires, and they chatted as fans do. Finally, I asked Charlie what was the biggest lesson he’d learned in his twenty-five years, and he replied, “True fulfilment comes from helping others.”