There is a popular myth that when Idi Amin expelled the Ugandan Asians in 1972, they came to the UK and bought up corner shops to make fortunes. Part of that is true: Amin did confiscate the assets of Ugandan Asians, and some did come here with little more than the clothes they stood up in, and some did buy corner shops, and maybe some did make a fortune. But the story of Subhash and Jaya Patel is somewhat different.

First, note that they came from Tanganyika (though the Asians from there and from Uganda had similar histories). In the mid-nineteenth century indentured labourers were brought from Asian countries to build the railways in East Africa. They were practically slaves, except that they were not actually owned by the bosses and could not be sold. Some stayed on; many went on to own successful businesses, and they were indispensable to the good running of government departments.

Subhash says: “My father had worked on the railways in Tanganyika, and by the time I was born he owned a reasonably successful transport business. But he must have seen the storm clouds gathering in East Africa, because when I was five he arranged for the whole family to obtain UK passports.”

Here is a simple timeline. Subhash was born in 1953. In 1958 his whole family became British citizens. In 1963 the British deserted, some might say abandoned, Tanganyika. In 1964 the Patels emigrated to India.

So why did the Patels leave Tanganyika? To understand that, compare the leaders of Uganda and Tanzania: Idi Amin was to become a murderous and callous dictator; Julius Nyerere became a reformer. But in 1965 there was no knowing how things would go. It was obvious, however, that things were bad and were going to get worse. In 1961, for example, there were only 120 African university graduates in the whole of Tanganyika, including two lawyers, two engineers and twelve medical doctors. Nyerere was dismayed by what he saw as the development of an elite urban class, so he introduced compulsory national service which required all university graduates to spend two years working in rural areas following their graduation. When a group of University of Dar es Salaam students marched to the State House in their academic gowns to protest against this compulsory national service, Nyerere was livid. “I shall take nobody – not a single person – into this National Service whose spirit is not in it. So make your choice. I am not going to spend public money to educate anybody who says National Service is a prison.”

Did this mean that Asian professionals would have been picked on? Who knows? But when Subhash was eleven the family moved to India, and that was where he grew up and went to school. And that was where, in Gujarat, a marriage was arranged between Jaya and Subhash.

Jaya says: “I came from a farming family. We lived in a kind of compound with several families together. I had two sisters and a brother and I was the first one to get married, so it was a big affair. There must have been 300 people. Close family gave support and others gave money. I was twenty and had just finished my A Levels, but I found myself leaving this lovely extended family and moving to live with Subhash’s cousin in Hendon. It was very hard to adapt. It was eleven years before I saw my family again, although we wrote letters. No telephone forty years ago, let alone Skype.”

Subhash found a job in East London in a clothes shop, and this led to another job in Whitechapel in a shop owned by a Jewish family. There is a thread running through this narrative: family. You help a member of the family, and when your turn comes you will be helped. Yet another relative owned the corner shop in Primrose Hill, and he wanted to move on to something bigger. So with the help of Subhash’s brother and the Jewish business owner, Asher, the man Subhash was working for – “He really treated me like a son” – together with more family help and a bank loan, the Patels acquired their present shop.

Working all hours is not an exaggeration. Subhash is out of bed at 4.30 a.m. and is on the way from their home in Ilford to get to Primrose Hill by 7.00 a.m. He works all day and leaves the shop at 7.00 p.m., getting home by 8.30 p.m. On Saturdays and Sundays he leaves the shop at 1.30 p.m. And that is the same every day of the year, except for Christmas and bank holidays; it has been the case for thirty-five years.

When their first child was five, they used to bring her with them. She went to Primrose Hill School, and went home with them in the evenings. But when the other children were born, Jaya stayed at home with the youngest two and the children went to their local primary school.

The corner shop was never going to make a fortune, but the fact that the Patels were able to acquire the lease after they had been there a few years meant that they were spared the rent rises that have seen off other local shops. “When we came here, there was the Post Office which is now a hairdresser’s, Mrs Davies’ Dairy, Nisha’s General Store in Princess Road, Mrs Welsh’s hardware shop. They’ve all gone, and when I retire I can’t see anybody making a living as a newsagent.” 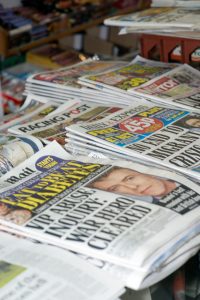 The shop sells between fifty and eighty newspapers a day. Now, with increased delivery charges, the shop makes only 20% of the cover price. It is the same story with cigarettes: with the advent of e-cigarettes that are bought on the internet, and legislation that makes shops cover their cigarette stocks, sales have plummeted. So that’s at least one government policy which is working. But of course the people who popped in to buy a paper or cigarettes usually bought something else as well.

The salvation of the shop has been Primrose Hill School. The children come in with their parents, but again things are changing. “Now they are very health-conscious, and there is all the publicity about sugar consumption. Parents restrict what the children can eat. I can see that is a good thing, even though it means our sales are down.”

Subhash and Jaya are devout Hindus. When they have time they visit the Bhaktivedanta Manor Temple, which was donated to Hare Krishna by George Harrison. Subhash says: “I believe in Hinduism. I believe in Krishna consciousness, which concentrates on simple living and high thinking. I read what it says in the Gita. One can find all answers in the Bhagavad Gita book.”

In that contemplative frame of mind, Subhash spends hours each day behind the counter, browsing through the papers and talking to his customers. He has established friendships that go back years. Some people come in every day.

” The day I retire, I’ll be totally lost. After thirty-five years of communicating with the lovely people of Primrose Hill, I don’t know what I will do. These people have become part of my life. I don’t have any hobbies. Maybe I will volunteer and communicate with new people.”

Perhaps Subhash and Jaya will spend more time with their growing family: their three adult children and their partners and two grandchildren. Although Jaya had to leave her extended family in Gujarat forty years ago, it seems that she has created a similar welcoming roof in Ilford.

“When the children married or wanted to leave, we thought why not buy a bigger property and share the expenses. Everyone has their own room and we eat together most evenings and at weekends.”

There it is again: the family.

Article by The Mole On The Hill
Photography by Lars Christiansen