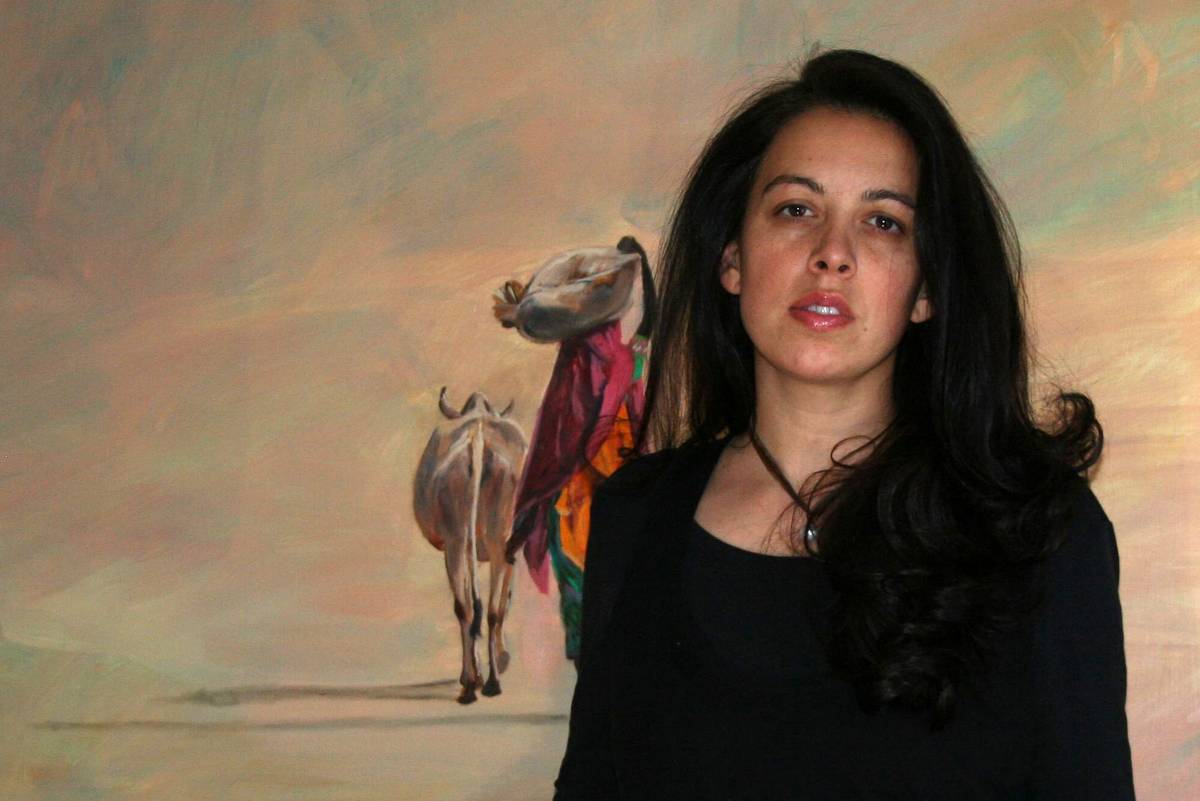 You may have seen Natasha Kumar on Primrose Hill, plus Dalmatians. You might have caught her art in Marylebone’s Railings Gallery.

Her first success was at the age of 17, showing at the Royal Academy Summer Exhibition. Since then through London galleries, art fairs and a solo show at the Southbank, Natasha has acquired an extensive following among discerning collectors in the UK and worldwide. Last year Soho House bought her work for its latest premises in Mumbai, and she was awarded a Rise Arts International screen-printing award, judged by Harland Miller.

Her passion and inspiration are India. She’s half Indian, quarter Kashmiri and quarter Afghani, with distilled Derbyshire on her mother’s side, so the subcontinent is there in her genes. In her work it comes out as a riotous collision of colour and characters, palaces and people, local Coke adverts and holy cows ‒ the contemporary Indian everyday, with not a Taj Mahal in sight.

It wasn’t always so. As a child her relationship with India was more love‒hate than love‒love‒love: endless journeys visiting aunties, squashed on the back seat of an Ambassador car; an equally endless diet of boiled eggs, dhal and rice en route. But then suddenly there would be a village where dancing bears and tiny child acrobats performed impossible tricks in the heat by the dusty roadside ‒ totally fascinating. She had to be dragged away.

The fascination has remained with her, and as she has developed as an artist so the interest has evolved too. Over the years it has grown to encompass the architecture and sculpture of India, capturing a sense of place through depictions of intricate, stone-fretwork jali windows, crumbling palaces and eerie step wells. A major motif in her work has been the chhatri, the quintessential North Indian stone canopy. But in her attempts to capture some sense of such a vast and varied place, and communicate it, she has come to realise that her work is equally about capturing her own sense of identity. After all, every artist ultimately paints themselves, if that doesn’t sound too obvious.

The thought is particularly true of her Indian Women series. Begun as simple observations of women going about various tasks, private or public, the works became Natasha’s observations on the roles available to women in India, ultimately evolving into a narrative of an Indian everywoman’s journey to empowerment. Take as an example Natasha’s ‘Indian Woman, Cosmic Change’, bearing a tray of votive oil lamps, splendid in her hot-pink sari. It is the woman’s role to lay the little lights at the entrance to the home, to welcome the goddess of wealth – Lakshmi won’t enter a dark home. But Cosmic Change has another role too. The lights are lit for the festival of Diwali to banish the shadows of ignorance. So the work transforms the Indian woman into a standard-bearer of enlightenment, lighting a path for women to knowledge and prosperity.

As Natasha developed the series, she noticed that the women who were her subject matter were more often appearing in the Rajasthani manner: veiled, glimpsed, elusive. Without her realising it, they had become part of an artistic exploration of her own heritage, as well as theirs ‒ an exploration that many second-generation British‒Indians will recognise. In each painting she was asking the great question, what could she know of their lives, which might have been hers?

The Cosmic Change woman, and her sisters ‘Diya’, ‘Abhaya’, ‘Dipti’ and ‘Fired Earth’ started out as watercolour sketches, aides-memoire that captured the essence of a scene which had caught Natasha’s eye. Painting outside in India is tricky: a crowd gathers at the drop of a turban, happy to share their thoughts on the work’s progress, so she has to get things down quickly. Only later in her farmhouse studio in rural Staffordshire are sketches are worked up into paintings or etchings, with the help of photographs of details that she might otherwise forget.

Despite those local difficulties, India en plein air is where she’s at her artistic happiest, observing the swirl of street or market life as it takes place. Above all, it’s colour that she loves, as an essential part of Indian existence. Everyone knows that pink is the navy blue of India, but not necessarily that colours have more cultural significance there than here. Sensual red is auspicious for weddings; green signifies life and happiness; black kohl around a baby’s eyes works as spiritual protection. Natasha brings all this to her work, in bold and compelling signature colours, evoking moods and feelings in vivid, mesmerising combinations.

Love of colour and street life lie behind her recent decision to create a triptych of lorry portraits. Not an obvious choice of subject matter, you might think at first. But in India every flat surface is a potential canvas, she says. If it stays still long enough to be painted on, it will be, with a mesmerising mix of folk art and cultural messaging. Lorries are the plus-size epitome of that, a visual cacophony in technicolour, trundling across the subcontinent.

Almost invariably, the tailgate is painted with the imperious advice ‘Blow Horn’ offered as a warning and an encouragement to overtaking drivers. The alternative, no less ubiquitous shout-out from the rear of lorries is ‘Great India’ set among a cloud of patriotic curlicues. This Natasha has adopted as the title of her latest collection, appropriately enough a striking montage of the characters and images that populate her creative imagination, a retrospective of the street life observed by her over the last decade. It is in a way the ultimate expression of her artistic identity to date. Not only has this taken a traditional paper art form, but it is also the wrapped exterior design of a new van owned by the specialist art handlers, Flight Logistics. #Getcarriedawaybyart and #Followthatvan is what we will be seeing on Instagram from May, as the van will be an unmissable presence in and around London.

What next? A recent meeting with the Dalai Lama in Dharamsala, and an exploration of the Buddhist caves at Ellora and Ajunta have opened a new creative chapter. We look forward to discovering what the next decade will bring.

For a chance to win a signed, limited edition print every month, follow @natashakumarart on Instagram and upload a picture of the Great India Van with the hashtags #Followthevan and #Getcarriedawaybyart