It’s Been A Long Dry Spell… The Albert Returns! 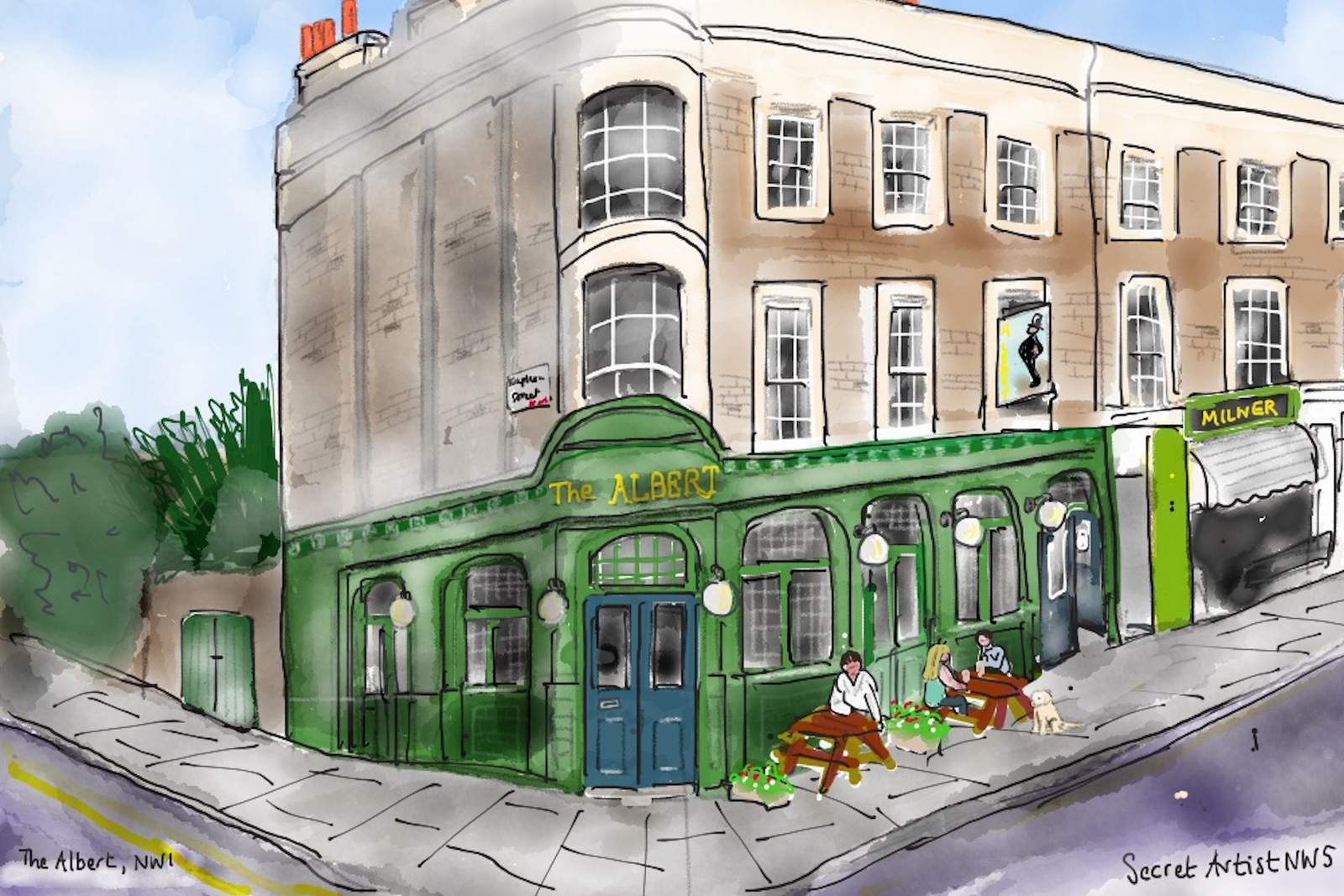 “The local” is an interesting concept. The term has connotations of community, convenience, conversation and camaraderie. “I’m off down the local” is a phrase embedded in British tradition that puts a smile on many faces and can raise eyebrows on others.

The pubs of Primrose Hill literally formed the cornerstones of the townscape during the development of the area in the mid-nineteenth century. The rapid expansion of the burgeoning railway infrastructure at the Camden Goods Yard required accommodation to be built for the workers and their families. The inhabitants of these new homes created a demand for services that laid the foundations for the village we know and love today.

Crucial to this housing, retail and workshop mix were the local pubs. Have you ever thought about the names of the pubs of Primrose Hill and those nearby? The Pembroke, The Dublin Castle, The Edinboro Castle, The Lansdowne and The Engineer. There was a very good reason that the pubs bore these names. Each establishment was located and named as part of a deliberate policy to separate the various different nationalities of railway workers from each other in an effort to prevent Friday night brawls! The Queen’s, The Princess of Wales and The Albert were considered to be above such skirmishes due to their royal associations. Whether that worked out in practice is something we cannot know!

Moving on 180 years to more peaceful times, we are still lucky enough to have a vibrant pub scene in Primrose Hill. But one of the players has sadly been missing from the mix for far too long.

The Albert in Princess Road closed in 2014, having continuously and successfully served the community for over one and a half centuries. This pub had attributes that made it much more than a drinking establishment. It was home to meetings of many local groups and was designated an ‘Asset of Community Value’ by Camden Council in 2015 at the request of the Primrose Hill Community Association and Primrose Hill Conservation Area Advisory Committee with the welcome support of our ward councillors. This status was the first of its kind to be approved in the borough.

In the time that has elapsed since the closure of The Albert many attempts have been made to see it reborn but all have failed so far. Now there is a light at the end of the tunnel in the shape of an independent operator by the name of Sam Moss. Sam and his colleagues have successfully run a small portfolio of pubs and their very own brewery for the last twelve years.

Under the legendary apple tree in The Albert’s beautiful garden he told me: “The challenge of getting the pub re-opened and back to its rightful place at the heart of its community is something we are extremely excited about. We are passionate about creating a place where people can feel at home and appreciate the gorgeous interior of this stunning building that is steeped in local history.”

We took in the lush surroundings of the perimeter of the outside space and Sam commented, “One of the key things that attracted us to the pub is its wonderful garden. We believe the garden is central to making the pub a viable and successful business.” This seems to me a revolutionary and welcome approach to public house outside spaces that have regrettably been viewed for many years as ripe pickings for developers.

Back at the bar we discussed Sam’s vision for the pub: “In terms of operation we see The Albert as a proper pub run as a genuine free house.” He added, “I am aware how passionate this community is about The Albert and I want to assure you that our one and only aim is to run a fantastic pub for many years to come.”

Sam revealed, “We are committed to this project wholeheartedly and are seeking to sign a 25-year lease on the premises. I hope that demonstrates our resolute aim to bring The Albert back to its rightful place in Primrose Hill for everyone now and into the future.

“We are planning some small changes to the layout which we hope will improve the experience for customers: including an update for the conservatory, an accessible WC at ground-floor level and moving the main toilets into the basement. We are so impressed by the beauty of the original building that it is our intention to preserve its architectural integrity and atmosphere for everyone to enjoy.”

Some might say that a pub is a pub, so what brings out such passion when The Albert is mentioned? I asked a few of our ‘locals’ for their thoughts on the re-opening of this particular venue.

Mary Portas commented, “Hallelujah! The Albert is to be opened again. Pubs are becoming an even more important social hub for our communities and must be protected from the ‘turn them into houses’ attitude that has prevailed for too long. I love it that the Primrose Hill crew never give up!”. Local resident and builder Sean Collins told me: “People here realise that a venue like The Albert was more than a pub. It was a multi-faceted space for the community to gather, a de facto business centre and an effective tool in reducing crime by its customers acting as a ‘neighbourhood watch’ on surrounding streets. All these benefits and more will be restored when it re-opens, so I fully support the new landlords in their venture.”. Andrew Marr, a regular customer until its closure, said, “The Albert was a rare thing in North London, a proper pub. It always had a great community atmosphere where you could meet neighbours and make new friends, so full of great conversation and a lot of laughter. It has been greatly missed and if these guys can re-open it, all of the Primrose Hill islanders will celebrate!”. Matthew Wright, who campaigned to stop the closure of The Albert in 2014, had this to say: “It’s wonderful news that a successful and popular pub is to be reborn, and in some style by all accounts!”

I wonder if the people who built this fine public house in 1840 could ever have envisioned how much it would be valued by our community, and the passion it would elicit almost 180 years later? This great venue has been a unique cornerstone of our community for all that time and has survived through thick and thin.

Here’s to another 180 years of The Albert; I’ll drink to that!

Illustration of the Albert by the Secret Artist NW5