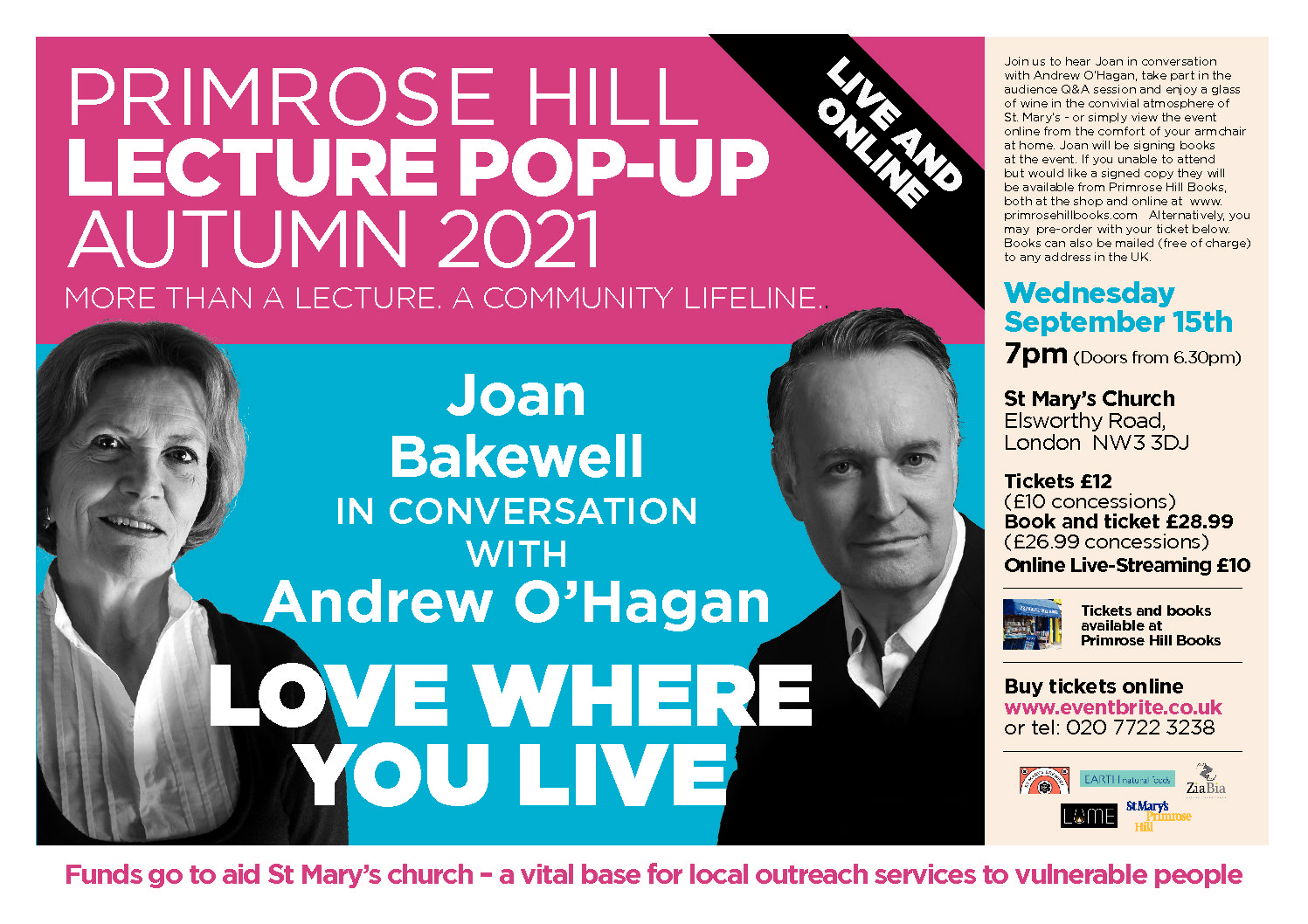 It was with plenty of trepidation that the Primrose Hill lecture series was booked this year. We didn’t know if we’d be able to have an audience, or whether we’d have to revert to online talks as we did when the series was postponed in 2020. So there was a lot more planning than normal, but the end result was worth it. It was, again, a series of very different, but equally thought provoking events.

First off the block was Lorraine Candy in conversation with fellow journalist Trish Halpen about how to live amicably with teenagers. Lorraine Candy is a journalist and mother of four, three of them being teenagers. She’s written a memoir of her experiences, Mum, What’s Wrong with You? The answer seems to be that we give them more credit for problem solving than we do at present, and we certainly don’t offer up any of our own experiences. We are from pre-ark days, and teenagers are not remotely interested in how we handled situations when we were their age.

Local resident Walter Murch was the second of our talks and he shared his stories and expertise of his fifty years in the film industry, being a film editor and sound designer. He’s worked on Apocalypse Now, Godfather I, II, and III, American Graffiti and The English Patient, and has been nominated for nine Academy Awards and won three Oscars. There’s an account of his lecture on this website. Walter Murch at the Primrose Hill Lecture Series – (onthehill.info)

Leroy Logan, described by The Voice as one of the ‘black police officers who helped change the Met.’, was in conversation with Natasha Beckles, the assistant curate at St Luke’s Church in Kentish Town, and an educational leader and consultant. His story of 30 years spent working in London was the subject of one of the films in Steve McQueen’s Small Axe series. He felt the police force was his calling, despite his father having been beaten up by them. It was a tough choice as officers are 45% more likely to leave the force if they’re black. In his book Closing Ranks, he argues that there is still work do in creating an equitable criminal justice system.

Hadley Freeman – who will be moving to Primrose Hill in September – was in conversation with Anne Karpf, author of The War After. After discovering a shoebox filled with letters and a sketch by Picasso amongst her late grandmother’s possessions, Hadley decided to research her life story. The resulting memoir, House of Glass is an account of the life of a Jewish family living through a tumultuous period in history. Hadley spoke about the research she undertook and the effect it had both on her family and her own life.

David Omand, the former director of GCHQ was in conversation with Jon Snow about his new book How Spies Think: Ten Lessons in Intelligence. The book is a masterclass in spycraft and David Omand gave the audience strategies which are used in secret intelligence but can be applied to everyday situations. Topics covered included how much work went into the question of pandemics, the threat of solar flares which could wipe all technology, the bogeymen running social media, and changing security threats. Interestingly, Jon Snow was once approached to be a spy, but he didn’t take up the offer.

The last lecture of the summer was David Bodanis who discussed the power of decency in a world turned mean with Julia Neuberger. Is it possible to succeed, get results and still be a good person? David, a bestselling author and inspirational thinker used a range of examples from the worlds of politics, business, medicine and the media to show that success doesn’t have to equate with misuses of power or tyrannical displays of ego. His latest book is The Art of Fairness.

It was another successful summer for the lectures, once again creating food for thought on a wide range of topics. If you missed the series, there’s the opportunity for a bonus three lectures in the autumn.