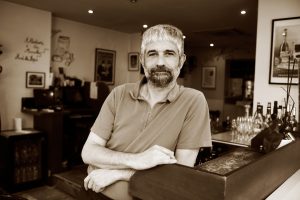 Seven years ago the rather dismal corner of Fitzroy Road and Chalcot Road was lit up when L’Absinthe opened. JC had arrived in Primrose Hill.

It seems unlikely but it was the only place I could afford. It was the cheapest on the market because of the location. It is a hard one. The businesses before us all went bust and the owners had to sell it as quickly as possible so we managed to get it quite cheaply. The biggest challenge for us is that weve got no foot-fall. We are not on the high street. People do not pass by us. They have to come to us. But that’s all right. We’ve been here seven years. And we are fine. We’ve got the hang of it.

Jean Christophe adopted the diminutive JC when he arrived at the age of twenty to work in Le Manoir des Quatre Seasons just outside Oxford. He only stayed there for six months and then moved to the restaurant of Marco Pierre White, the British chef, restauranteur and television personality, noted for his contributions to contemporary international cuisine.

White has been dubbed the first celebrity chef, the enfant terrible of the UK restaurant scene and the godfather of modern cooking.. White was, at the time, the youngest chef ever to have been awarded three Michelin stars. It was a remarkable journey for JC, the son of a builder in Burgundy who left school at sixteen to go to catering college. I was not academic, clever yes, but not academic, and I am the only one in my family who went into catering. Funnily enough I can’t really cook. I can cook if I have to but I have a very good chef and I leave it to him. I’m a wine-waiter by trade. I am very passionate about wine, especially the wines of Burgundy. I drink a lot of it and that makes me knowledgeable. I’m not an expert, I’m a connoisseur. Expert or not JC became the sommelier for the most prestigious restaurant in London and stayed there for twenty years.

When JC first came to England people did not have much interest in cooking but now, partly as a result of the almost daily TV cookery programmes they are fascinated by food and the kitchen. The downside of the TV programmes is the young people all want to become chefs. They see only the glamour of it. There’s a massive shortage of young people who want to work in the front of the restaurant, to be waiters.

JC has very little leisure time. That’s the problem with catering. The restaurant is your family, your home. There is always something going wrong so even when you are away you spend a lot of time going back. But when I do have time I like to cycle a lot. Sometimes I see my girl-friend and she appreciates that (said with Gallic smile). I have two sons who both play rugby for Bristol and I watch them as often as I can. I spend a lot of time travelling back and forth across Britain to see them play. My sons are the most treasured possession I have.

Anything materialistic is not exactly precious. I don’t get much time to dine out but if I could I would go to Lyon to the restaurant of Paul Bocuse. For me he is the doyen of chefs. He invented the nouvelle cuisine. He has had three Michelin stars since 1965. I had the best meal ever at his restaurant. I would go back there. I would go now. Today.
In his seven years here JC has made Primrose Hill his community.

I am a big community man. I need people around me. I give a lot. If you want to be part of the community you have to. There’s no reason why we shouldn’t help when we can. I have no problem with being generous in the sense that I have been very lucky in life and if I can help I will. The best thing about Primrose Hill is the community spirit. It’s like a village. It’s amazing how many people know each other. Look at the way they organise the library and the community centre. It’s a bit of an oddity really. Unusual for London. It’s like a mediaeval village. It has its church and its school. And it has its boundaries. They are invisible but you know when you are in Primrose Hill and you know when you leave it.