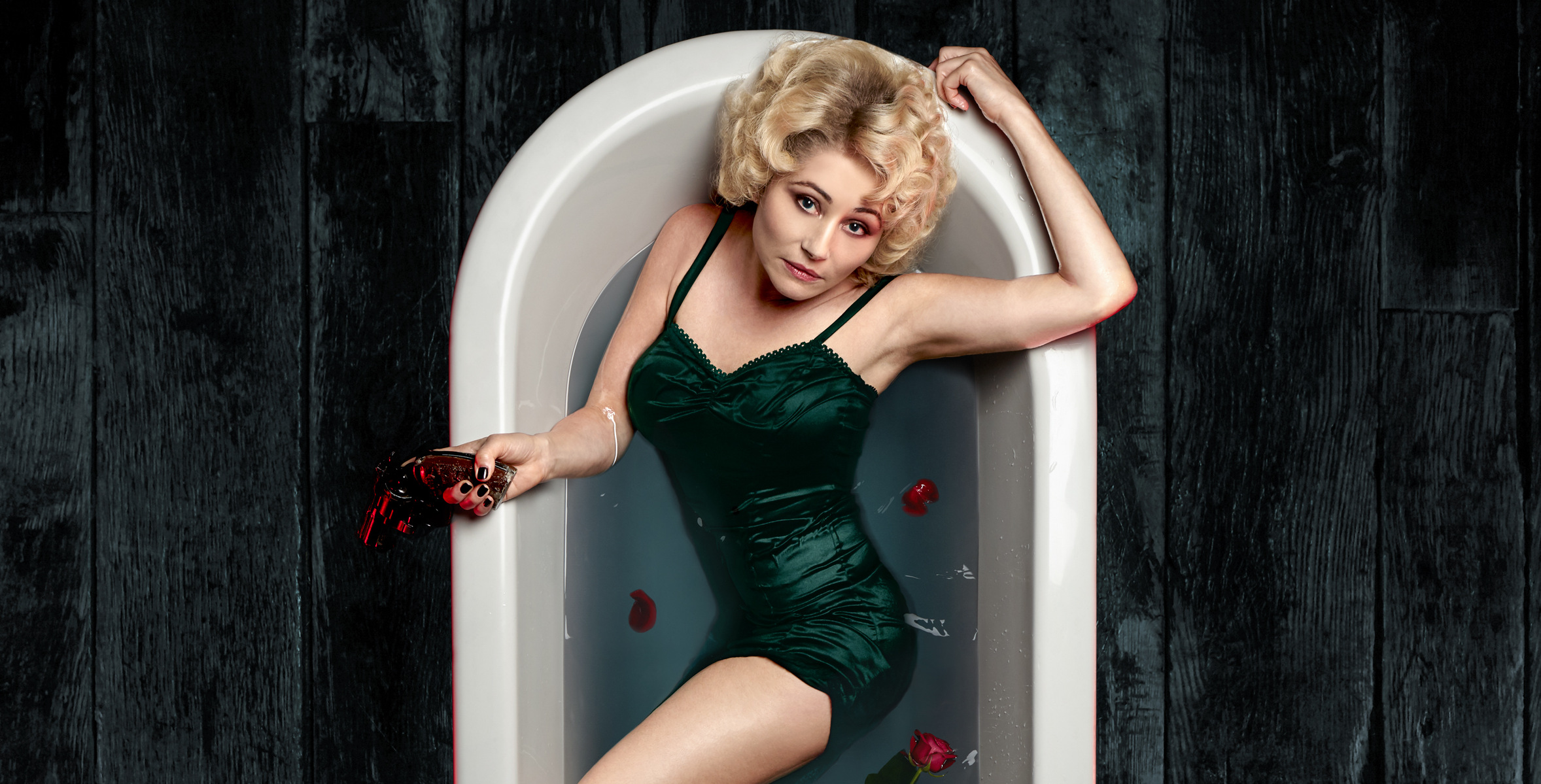 In a special interview for OTH, West End and Broadway star and Primrose Hill resident Frances Ruffelle discusses her latest role and why she’ll always consider the Hill her home (despite all the estate agents).

Exclusive offer available for OTH Readers for this show.
Get 55% off tickets using the following link:
https://www.cheaptheatretickets.com/the-wild-party/

Frances Ruffelle has been living in Primrose Hill for twenty years and has been within the NW1 postcode for more than three decades (she doesn’t look old enough!). She spent much of her childhood in the neighbourhood, hanging out with her oldest friend Sadie Frost; Greenberry regulars might have spotted a picture of them both framed on the wall or seen the two of them chatting over lunch with their families and dogs. Recently Ruffelle has been spending most of her time in the theatre, as she’s starring in the new musical The Wild Party.

The Wild Party is a jazz-age musical written by Michael John LaChiusa and is based on the book-length poem by Joseph Moncure March, which was so outrageous for its time that it was banned in 1928 and only republished in the late 1990s. Set against a backdrop of Manhattan decadence and 1920s excess, The Wild Party tells the story of a Vaudeville showgirl and a Vaudeville clown whose relationship is marked by vicious behaviour and recklessness. Set in New York’s Lower Eastside, it’s about a wild party in the prohibition era, with no shortage of illicit drugs, alcohol and sex.

Ruffelle is quick to point out that “It’s much more wild than any of the parties I’ve been to! I play Queenie, a blonde chorus girl who dances with hardly any clothes on twice a day in a rough Vaudeville house in the Bowery district. Queenie and her husband Burrs are in an abusive, dysfunctional relationship and try to get some spark back into their marriage by throwing a rather debauched party for their unsavoury friends, plying them with bathtu
b gin. It soon turns into a mad, dirty party.” 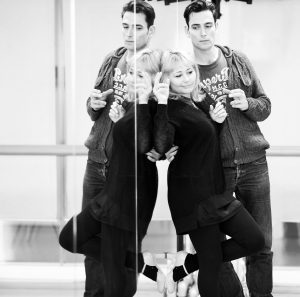 Ruffelle fell in love with the ‘mind-blowing’ music for The Wild Party when she first heard it ten years ago, and was also drawn to the 1920s flamboyance and style. “I love the clothes and the music from that era. So glamorous and fun. I love the art deco interiors too (I’m a bit obsessed with interiors).” Most importantly for Ruffelle, she was drawn to the depth of Queenie’s character and ultimately her vulnerability. “Queenie is fun, a wild beast ? some say I am too! It’s a challenging role as she hides the real her most of the time, pretending she is cool and strong and wearing lots of make up all the time; but by the end of the show she reveals her vulnerable side.”

Born in Essex (despite the French-sounding name), Ruffelle comes from a showbiz family. Her mother Sylvia Young runs the UK’s leading theatre school, and her daughter Eliza Doolittle is a famous pop singer. She also has two sons, Nat and Felix, who have chosen not to follow in their mum’s footsteps. As a young girl Frances used to sing and dance with Sadie Frost, and knew early on that there was nothing else she wanted to do.

She is perhaps best known for her award-winning role playing Eponine in Les Misérables in the West End and on Broadway (she also played Whore #1 in Tom Hooper’s Oscar-winning big-screen version in 2012). Her many other stage roles include Dinah in the original company of Andrew Lloyd Webber’s Starlight Express and Roxie Hart in Chicago. Ruffelle also gained a Top 10 placing at the Eurovision Song Contest (far more successful than most of the UK’s entrants!) with the hit single ‘Lonely Symphony’ in 1987; recently she played Naomi, Dorien Green’s vicar daughter, in the ITV comedy Birds of a Feather. She has recorded five solo albums and recently performed solo shows at the Garrick Theatre, the Crazy Coqs and New York’s 54 Below.

Ruffelle has a busy year to look forward to. “After The Wild Party finishes, I’m performing my solo show I Say Yeh-Yeh at The Other Palace theatre. And I’m going to be doing a play in New York, but I have to keep a bit quiet about that one as it’s not been announced yet.” When she’s in New York she’ll also be working on some new music with Mike Thorne, who discovered the Sex Pistols.

She follows a particular routine when she’s getting ready for a new role. “I rarely listen to other music, because I’m working on music all day and I need peace. But before I started rehearsals for this show I was listening to people of that era: Josephine Baker, Marlene Dietrich and Count Basie.”

Ruffelle has an eclectic taste in music and her children help her stay in touch with current trend-setters. She was initially inspired by some of the big entertainers, “people like Judy Garland, Barbra Streisand, Elvis Presley and Liza Minelli. I like everything really, from Punk to Musical Theatre,” she says. “I do love songs and artists who tell stories ? the likes of Paul Simon and Tom Waits ? and I listen to things my kids tell me to listen to. I try and keep up! Recently I’ve been listening to Lianne la Havas and James Blake, but I’m not really up to date; if I want to relax around the house I put on something romantic, like Françoise Hardy.”

What advice would Ruffelle give to young people wanting to go into the industry? “Don’t wait for the phone to ring to create your own work; write and stay active and remember why you’re in it. If it’s just about being famous, then that’s a big shame!”

Down-time and life in the village

As a successful international performer, Ruffelle has also lived in glamorous places like Los Angeles and New York; but she always comes back to her favourite part of London when she can, and currently splits her time between Manhattan and London. “I enjoy living in New York but my home is definitely in Primrose Hill,” she says. “I love the laziness Primrose Hill affords me. I can run out and grab a coffee in two minutes and everything is on my doorstep. Somehow I feel it’s almost like living in a country village but in town, although the current air pollution issue isn’t nice.”

When she’s in New York, Ruffelle lives in Manhattan’s West Village next door to a patisserie “where I grab my coffee and croissant every morning. The West Village is lovely too, but I do get a bit lonely. Coming home to Primrose Hill, I bump into all my old chums and feel so surrounded by friends and family. It’s hard to be lonely in Primrose Hill. My ideal day in the neighbourhood is going for brunch with my kids and my dog at Greenberry and then a walk on the hill.” 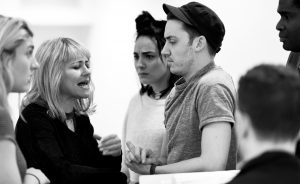 As a long-term resident, Ruffelle has seen lots of changes in Primrose Hill and is sad that some of the long-standing businesses in the area are no longer here. “I wish there were fewer estate agents. I think it’s a shame that some of the small businesses have closed: I miss Prim and Cachao, although now I don’t have to resist their chocolate pancakes any more; and I do miss Sesame, the health food shop, and its unpretentious interior. I do like Shepherds for its variety, which is so unlike most local grocery shops, but it is expensive.” Ruffelle has her own nickname for the convenience store with the maroon awning: “I call it Shepherd’s Fleece ? does anyone else?” (Perhaps they will now!)

She also reminisces about the organised fireworks evening on the hill. “I wish they would bring it back, I miss that so much,” she says. “We would all gather at mine, take mulled wine to the hill and then have a party afterwards. It was almost worth living in Primrose Hill just for that. It’s such a shame that it stopped.” As a yoga enthusiast, Ruffelle was also disappointed to see Triyoga move to Camden. “I miss Triyoga being right in the village – although I suppose that’s rather lazy of me, as it’s only five minutes away.”

With such a busy travel and performing schedule, Ruffelle likes nothing more than staying local with her friends when she gets some spare time. “I do love to travel, but when I’m in London I’m such a bore: I hardly eat outside Primrose Hill and tend to visit the Lansdowne pub quite a lot. When I’m not performing, my favourite thing of all is chatting to my girlfriends, slurping good red wine and eating smelly cheese!”

When she does venture further afield, Ruffelle spends time in Soho taking in shows or visiting Andrew Edmunds’ restaurant (it’s dog-friendly) or the Ivy, where she has been going for thirty years. Her favourite shop, hands down, is Liberty. “Even if I’m not looking for anything specific, I’ll go and have a look at their arts and craft furniture section, and I just gaze at the beauty of the building. Also, I see a lot of theatre,” she says. “It surprises me how most people don’t seem to go now. There’s so much good stuff to see in London, especially The Wild Party!”

As our interview draws to a close, we touch on Brexit and Trump. There are parallels between the economic woes of the Wild Party era and the modern day. Ruffelle responds with a message of togetherness: “I find it hard to face the news these days,” she says. “I just wish we could all find love and compassion for every person, no matter where they’re from or what religion they believe in.”

The Wild Party is playing at The Other Palace (formerly St James Theatre) until 1 April.