Behind the stalls: A day in the life of Primrose Hill Market. 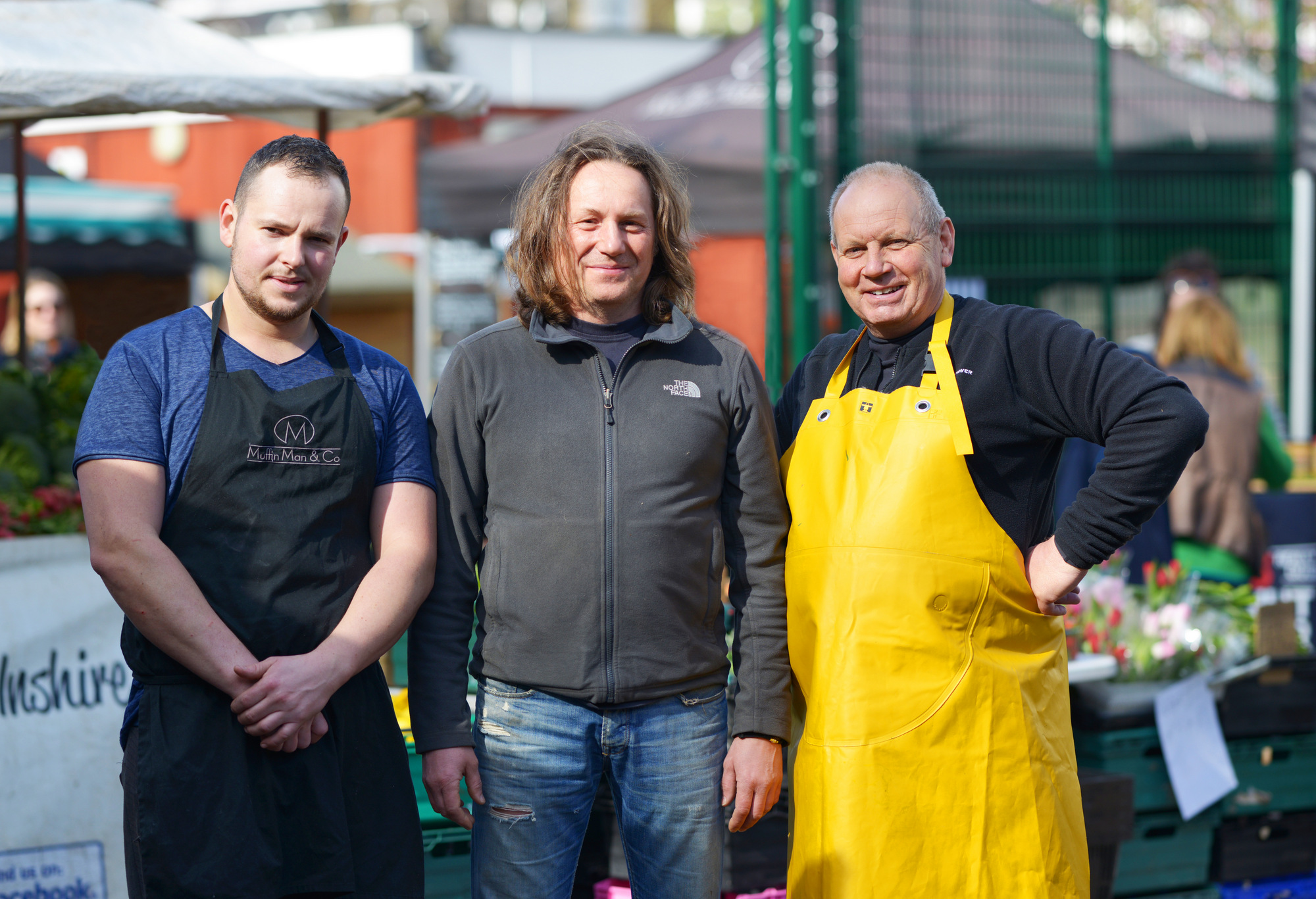 Last orders in The Queen’s has long gone, the early morning runners are yet to brave the Primrose Hill summit, and the school’s weekday residents are all tucked up in bed – it’s time for the weekend to take hold at St Paul’s primary school…

Bleary-eyed and still getting used to the steadiness of dry land, it’s 4.30 a.m. and resident fishmonger Mick from award-winning Veasey & Sons is enjoying the end of his weekly lie-in. “It’s still dark when we go to pick up the fish and load the van,” he says a few hours later, dragging an overflowing crate across the playground. “The boat is in East Grimstead,” he continues, piling up his week’s catch, “so once we’re fully packed we set off on the three-hour drive to London.” “It’s an early start,” his partner adds with a smile, “but we love coming up here.”

By the time Mick has hit the M25, Tony from Hook & Son is already up and organising the dairy vans at their farm in East Sussex, making sure they’re well stocked for the weekend London markets. “I leave at six, and I’ve got a couple of drop-offs before I get to Primrose Hill about 9 a.m.,” Tony explains while sorting the crate of raw milk for the market’s coffee cart. He dodges the gazebos being set up in the middle section to take his crate over to The Coffee Cart, already warmed up and getting eyes from thirsty traders, desperate for the morning’s first brew. “We’ve supported the market from the very beginning,” Tony adds, returning to his stall, “and it’s great to see so many regulars; we wouldn’t survive without them.”

The market is coming together, with produce being meticulously displayed and grills starting to heat up for the breakfast rush. Meanwhile Wild Country Organics are stocking piles of onions and bags of freshly plucked herbs. “Around this time of year there are lots of leaves in season,” he advises, gesturing to a bag of large-leaved sorrel. “And we’ve just begun planting for the summer,” he adds about the farm in Cambridge, “lots of beans and cucumbers.”

Even as the market gates are opening to the public at 10 a.m., just two hours after the playground was first cleared of left-over footballs and scooters, The Muffin Man has a line of boxes already in place for the queue of hungry families wanting their breakfast muffins. “The pork belly with sausage, cheese, bacon jam and egg is definitely the bestseller,” owner and chef Steve says, flipping a few chorizo hash browns on the grill. “We get fresh duck eggs from another trader, Ted’s Veg, for them. I hand-make everything, including the muffins and the sauce.”

Now in its second year, Primrose Hill Market started in September 2015, and was set up by local resident Mike Norledge, who was desperate for fresher produce in the area and to create a hub for the community. “Food has always been important to me, especially the social aspect. We’ve gone from strength to strength and we’re so lucky to have so many loyal locals who create such an amazing atmosphere every week. A lot goes on behind the scenes, so my favourite day is definitely coming to the market and chatting with the locals and traders and seeing it all come together.”

The market has fast become the go-to place for local residents to pick up their weekly shop. It has also gained a great reputation in the London food market scene: the view of a mist-covered Primrose Hill, the smell of Benny Buttons’ vegan pancakes, and the chance to pick up a cupcake from Flavourtown bakery on the way round certainly beat a crowded supermarket. From Olivier’s fresh sourdough to Picks Organic butchers, there’s plenty to keep the fridge stocked and support independent businesses while you’re at it.

As lunchtime nears, another turn around the market shows Sharoona from Veasey & Sons weighing out a hefty cut of tuna steak, replacing the remainder across the crushed ice. “People love the tuna and monkfish,” she says, once the customer has been served, “and our fish pie mix too. I really love it when I see kids getting excited about eating fish, because I know that what they’re getting is fresh.”

A few barks and a play-fight erupt by the entrance as a couple of dogs can’t hide their excitement at the prospect of bounding around Primrose Hill, but not before a quick taste of Pic’s peanut butter, enjoying the fuss of the stall-holder who’s happy to treat her canine customers.

The afternoon draws on and the stocks of the hot-food vendors deplete, Olivier’s piles of bread and pastries are reduced to just a few lone loaves, and Brockman’s Farm are constantly rearranging their diminishing displays.

Soon it’s time to reverse the hard work of the morning and pack away left-overs, fold away tables and fight to bring down gazebos while contending with Britain’s eclectic weather. Not long after the last customer has trailed home at 3 p.m. does the battle begin at the school gates to get the vans through and loaded up to get away on time. “Once I’ve packed up, I probably don’t get back to the unit in Epping until after 6 p.m.,’ The Muffin Man’s Steve says. “And then I have to prep for the Sunday markets, so I don’t finish work until 8 or 9 p.m.”

It’s a similar story for Wild Country Organics, who head back to the farm in Cambridge at 4 p.m., not arriving until at least 6 p.m. once their London pick-ups are complete. “And then we do it all again tomorrow.”

There’s one final sweep of the school yard after the vans have pulled out of the grounds, all sports equipment is restored to its rightful place, and any rogue vegetable debris has been cleared away. The gates are locked just after 5 p.m., so that the school is ready to be handed back to its full-time owners. See you next week…