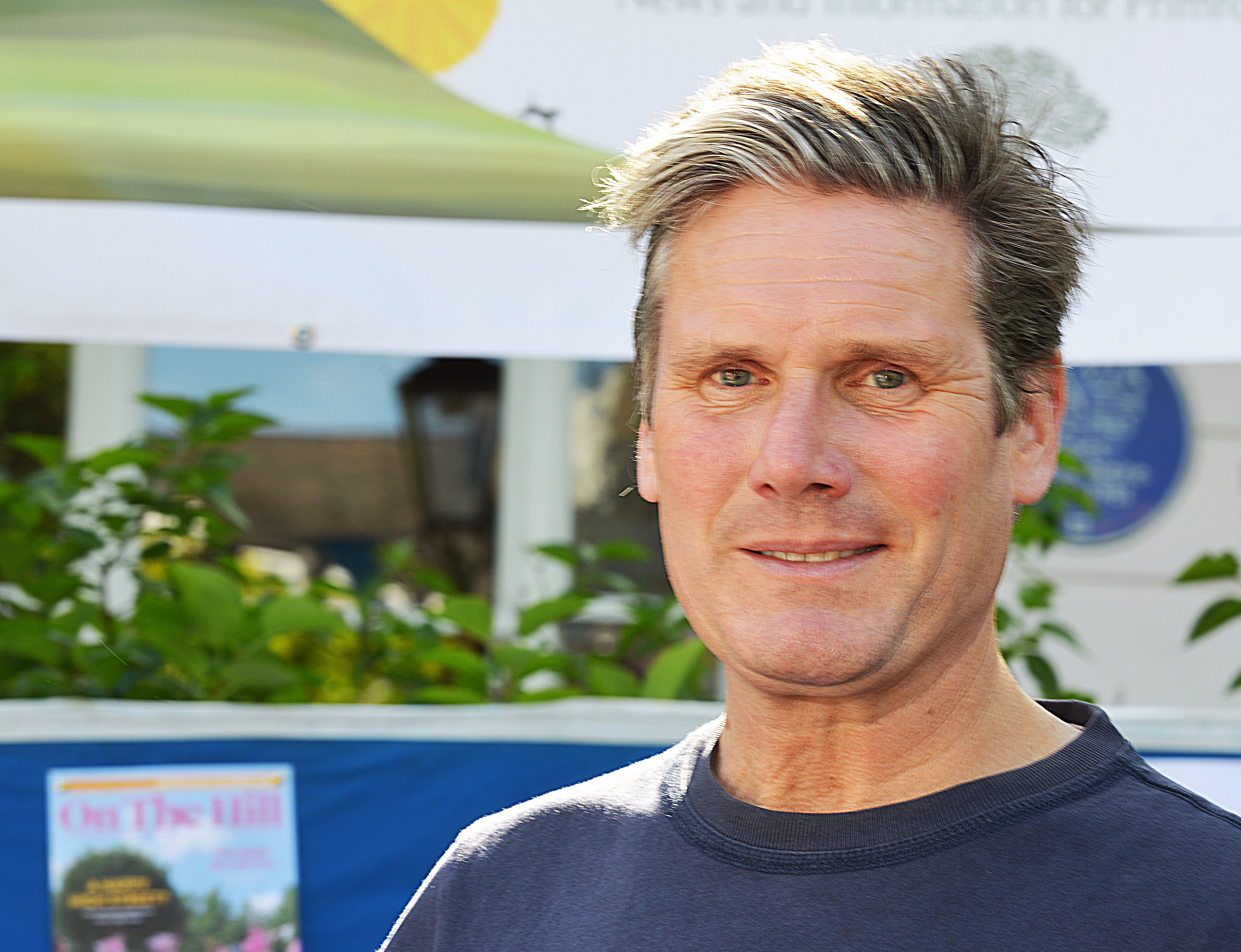 Our local MP Sir Keir Starmer talked to Micael Johnstone just before the general election about food, politics and some of the hot topics impacting on Primrose Hill.

Keir Starmer looked surprisingly fresh-faced and relaxed as he arrived for our interview, closely followed by various aides and Labour Party campaigners scurrying to escape a brief summer shower. It had been a pretty hectic few weeks in the run-up to the second general election that Starmer had faced in his relatively short political career. As well as pounding the streets of the Holborn and St Pancras constituency every day, he’d been travelling across the UK launching manifestos and supporting his fellow MPs.

The hard work paid off, as Starmer and his Labour Party colleagues did have a successful election. Although Holborn and St Pancras has been a safe Labour seat for decades, Starmer built on this and enhanced his majority by over 17% with more than 70% of the vote.

Starmer (aged 54 but doesn’t look it) is a vegetarian ‒ “it’s better for yourself and for the environment” ‒ and he ordered a sweet potato and hummus wrap as we sat down for the interview in Hummy Yummy in Kentish Town, where he lives with his wife and two young children. The relaxed setting of a local independent restaurant reflects the fact that Starmer is clearly a politician with strong roots in his constituency and his finger on the pulse when it comes to local issues.

“The fantastic thing about the constituency is the variety of people and places,” he said. What areas and places does he most like to spend time in? “We are big fans of the Heath,” says Starmer. “We spend lots of time there as a family. We go to Kentish Town swimming pool and the Talacre Community Sports Centre regularly, and Granary Square in King’s Cross is also a nice place to go.” How about places in London to socialise of an evening? “We’ve been to the theatre three or four times since the kids were born!” he laughs. “My favourite restaurant is Moro in Exmouth Market, and Drummond Street is brilliant for veggies. I’ve been to the restaurants there a lot as I’ve worked with Drummond Street traders on HS2 issues.”

HS2 is an issue of particular interest and concern to Primrose Hill residents, so I took the opportunity to turn the conversation to that topic. Starmer told me that he’d voted against the HS2 Bill in Parliament, but he’s now working to protect his constituents from the worst impacts of the project. “My focus is on persuading the planning authorities to keep the train in the tunnel for longer, to reduce the damage to and impact on Primrose Hill and Camden, and we’re winning that battle.” More broadly, Starmer is also looking at the issues of compensation and mitigation and “keeping HS2 to their assurances”.

As a former lawyer (he was knighted for services to the legal sector, where he was a human rights QC), Starmer sees his role as an adjudicator to help local people voice their concerns on HS2. “Air quality is also tied up with HS2,” he says. “There will be impacts on our green spaces and pollution from the construction trucks. Let’s hope we can make sure that the Regent’s Park hedgehogs are OK.” Starmer says that he would like to see the majority of the construction equipment and debris transported by rail rather than road, to reduce disruption, noise and pollution for local residents. “You’d think rail would be a given, but we don’t have a hard-edged commitment,” he says.

What can Primrose Hill residents do about HS2? “They have been very active so far,” says Starmer, “and that needs to continue. There will be further meetings with HS2; in fact, it’s time for another public meeting now that the Bill has become an Act.”

Before we tackled some of the other more serious issues, I asked Starmer about his beloved football team, Arsenal, who were due to play in the FA Cup final a few days later. “I’m not one of those people that says ‘Wenger out’, but it’s probably time to think about moving on,” he said of the long-serving French manager. “He’s done so much for the club. It’s probably about changing a few players but keeping the Arsenal system and style.” Arsenal did of course go on to win the cup, with the manager agreeing a new contract; I wonder what our MP thinks now!

Air quality is a major health issue at the moment and many people (including High Court judges) have been critical of the response from our elected leaders. Starmer agrees.

“The government is not taking it seriously enough. We need a Clean Air Bill ‒ primary legislation to tackle air quality. We also need more sophisticated measurement of the impacts and real-time support for Sadiq Khan. There are over 200 deaths a year from poor air quality in Camden alone. I hope that the Conservatives will act. They have to be challenged and prodded, and it’s Labour’s job to do that. This can happen through the Labour mayors in other major cities, in Liverpool and Manchester.”

Leadership ambitions and the future

I asked Starmer to compare his previous career in the legal world with his current job as an MP, and he readily acknowledged the fast-moving nature of UK and global politics. “They’re both demanding in different ways,” he says. “Politics is much more unpredictable, and harder in terms of family life.”

Starmer has quickly risen to a senior role on the opposition front bench as Shadow Brexit Minister, and before Labour’s resurgence in the June general election he was the bookies’ favourite to be the next leader of the party. Our interview had been going so well that I hesitated to ask him about this, but sheepishly I brought it up. Starmer has clearly been asked about his leadership ambitions before and was quick to dismiss the idea, telling me that the party’s general standing in elections is his primary concern. “The only thing that matters is winning,” he says. “That’s my sole focus.”

Not many people had been predicting a hung parliament in the run-up to the election, but there had been a fair bit of talk about the idea of a progressive alliance, with Labour, the Lib Dems, Greens and the SNP getting together to unseat the Conservatives. I asked Starmer what he made of the concept. “There’s nothing wrong with parties working together on specific issues; that happens all the time,” he says. “But I think there are problems with a formal pact. The reality is that this election looks like a two-horse race. Brexit is clearly a common cause. We need to protect the rights of EU nationals. Those alliances matter. The only way to challenge the government is by working with others.”

Although Starmer is now representing Labour on Brexit, he was a staunch ‘Remainer’ in the run-up to the EU referendum. “I passionately campaigned to stay in the EU and was bitterly disappointed with the result,” he says. “What is the relationship (with the EU) going to look like? We need to retain a partnership. I’ll be fighting for collaboration and internationalism. We need to avoid the no-deal situation, and get a deal built on the right values. There is a need to retain collaboration on issues such as science and climate change.”

Starmer’s assistants started to gather up their leaflets and he told me that we were out of time, so I concluded by asking him about the future and what he perceived to be the major challenges facing politicians and society as a whole in the coming years (apart from Brexit, obviously). “Ensuring that globalisation works for everyone,” he said. “It can be a cause for inequality. Also maintaining peace and security in an unsettled world. There is an important role for international bodies to ensure progress on issues like climate change and counter-terrorism. We must always remain as internationalists, as all of these challenges are international in nature.”

The aides signalled that it was time to get back to the campaigning and so I took my cue to leave, with Starmer warmly shaking my hand before I headed out onto Kentish Town High Street. The rain had stopped and it was a nice summer’s afternoon to be walking back towards Primrose Hill. I had a feeling that our thoughtful and friendly MP is likely to have his political moment in the sun rather sooner than later.

While you are here, please do take our reader survey and a chance to win a Fortnum & Masons hamper
http://onthehill.info/survey/