Cecil Sharp House By the Mole on the Hill

Us moles have a good relationship with the folk singers you get down at Cecil Sharp House. You hear them up here. ‘I wish I was a mole, I’d tear that mountain down.’ And even when they’re on about mole-catchers they come out on our side. You know the story. The mole-catcher catches the farmer up to his frolicks with his wife. ‘I’ll make you pay dearly’ says the mole-catcher,’ for tilling my ground and the money it’ll cop you no less than ten pounds.’ ‘Ten-pound,’ says the young fellow, ‘That I don’t mind. It only works out about tuppence a grind.’ 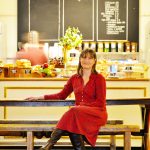 Rachel Elliott, now Education Director at the English Folk Dance and Song Society, is aptly named: just like Billy Elliott, she left Gateshead in north-east England when she was thirteen.

“I went to study at a residential ballet school fully funded by the Gateshead Metropolitan Borough Council, probably the last one to benefit before the Thatcher cuts put paid to all that. I went on to study for three years at the Rambert School of Ballet and Contemporary Dance, and I worked in dance until I got the job at the English Folk Dance and Song Society (EFDSS) in 2008.”

Her very first job was with Focus On Dance in the 1980s, which brought her to Cecil Sharp House for rehearsals. Since then she has lived in Camden and done much of her work here. For sixteen years she taught dance in Great Ormond Street Hospital, worked for London Contemporary Dance Trust at The Place in Bloomsbury and across the UK, and has taken contemporary dance to every special school in Camden.

“I worked with Green Candle Dance Company, directing a show for hospital wards. We had four dancers and a musician and the performance was sensitive to the confined space. Our aim was to bring colour, joy and relaxation to the children and involve them in some interaction. I studied British Sign Language and did a lot of work with deaf young people, including directing the Deaf Dance Summer School at Sadler’s Wells for nine years.”

For the past ten years, Rachel has been Education Director at EFDSS. It was a new post that gave her responsibility for music education as well as dance education. 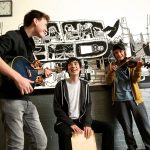 “My biggest challenge was the music side. I had always sung the traditional songs of the north-east. Just get me started and I’ll sing you ‘The Lampton Worm’ or ‘Cushie Butterfield’, but I had to get to grips with the way music is organised the music curriculum, the music education hubs in local authorities and national music organisations and I had to learn how to work with them.”

EFDSS owns the building on Regent’s Park Road which houses its specialist Vaughan Williams Memorial Library (VWML), and many activities take place there. They have adult, youth and family activities; numerous regular classes for accordion, banjo, guitar and other folk instruments, Morris and English country dancing; there is the seventy-strong Cecil Sharp House Choir with a waiting list for new members; popular monthly family barn-dances, youth holiday courses and ceilidhs. However, EFDSS is not just a jewel in Camden’s crown. It is the folk arts development organisation for England. The stress is on English folk traditions, although there are many overlaps and interconnections with dance and song from Scotland, Ireland, North America and beyond. 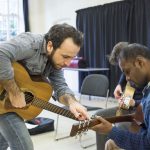 “Of course we work with schools. At the moment we have a big project with Essex Music Services, working in primary and secondary schools uncovering Essex folk songs. Our London Youth Folk Ensemble has a joint project with Camden Music’s New Camden Jazz Ensemble combining jazz and folk; and there will be two performances: one at LSO St Luke’s and one at Cecil Sharp House on 27 March to celebrate the collection of James Madison Carpenter joining our online digital archive. The free evening will also feature our choir, a choir from Scotland, songs and archive film.”

It is very worrying. Music and the arts in general are being squeezed out of the curriculum because of the English Baccalaureate 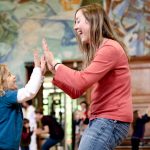 So everything is going with a swing at EFDSS, but there are still concerns about the arts in education. “It is very worrying. Music and the arts in general are being squeezed out of the curriculum because of the English Baccalaureate. Schools are trying to channel their pupils into the approved subjects, so many dance, music, drama and art teachers are the first to go when there are cuts. It degrades the status of these subjects. This is crazy when you think how important our creative industries are to the economy. But we are fighting back, and as an organisation we have supported strong representations to the government.

The only way you can ensure that all young people have access to the arts is if they have a strong presence as part of the curriculum in state schools. We work closely with Camden Music, and are lucky to have such a brilliant service in the borough, but they are constantly up against it. We’re also partners with Camden Dance Development Group, who still manage to have a schools dance festival every year at The Place; and as part of that, we currently have a morris dance project at St Paul’s School. It takes ten years to build up a strong arts tradition in a school. It can be destroyed in one term.”

A depressing story, but Cecil Sharp House is thriving. If you want to revisit the 1960s, drop into Sharp’s Folk Club on any Tuesday. There is no cloud of cigarette smoke, but apart from that it is nostalgia all over again. The beautiful perma-garden is looked after by a team of Camden volunteers; the whole building has been refurbished, and with a lift now installed it is wheelchair accessible, and the welcoming café is open to everybody. Kennedy Hall has been done up and has a new dance floor and curtains; and the Ivon Hitchens mural has been cleaned and restored. And don’t forget that this is where EFDSS has hosted, without a hiring fee, many of the Primrose Hill Community Association and the library’s celebrated fund-raising events.

Us moles’d love to see some Morris dancers and folk singers up on the Hill. As long as they don’t sing about mole-catchers.

Main photo of Rache Elliot (top of the page) by Sarah Louise Ramsay, other photos by Roswitha Chesher and Rosie Reed Gold.