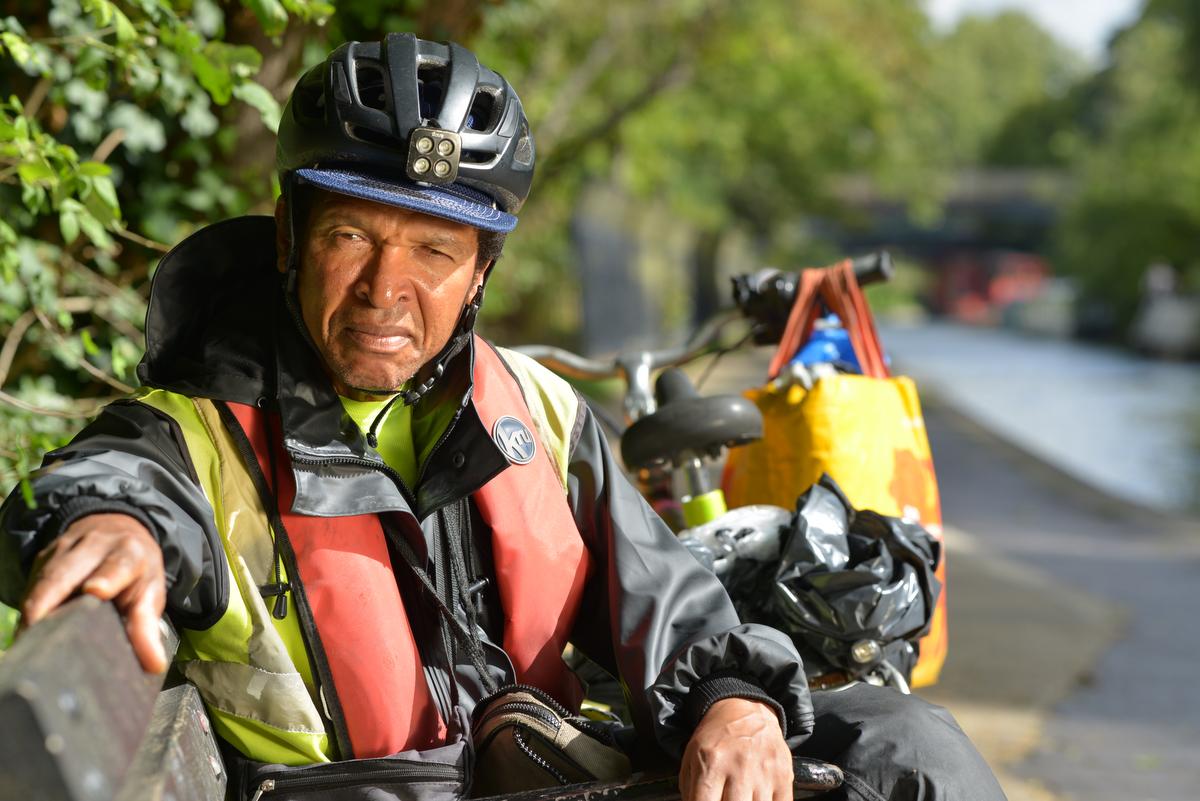 That canal. All that wildlife. Not so good for our cousins, the hedgehogs, who are going to be bulldozed out for a lorry park. Lovely. Peaceful. Not so peaceful when the navvies were digging the canal and the horses were pulling their loads. Poverty and exploitation. Something the guy who keeps the towpath litter-free knows plenty about.

“My job is to clear the bins and sweep litter. Every day. Four and a half miles each way. That means I walk about 10 miles a day. Camden Market these days has changed. You used to have young guys sitting there: ‘You wanna buy this?’, selling weed. They used to hide the weed by the bins. Then it would go missing and they’d come up to you: ‘Did you find my weed?’ It could be quite threatening. But nowadays you don’t have that kind of thing.”

Music and drugs went together. Cocaine is not cheap… Then, I don’t know how, but I fell from a very tall building on Notting Hill Gate. I woke up six weeks later in Hammersmith Hospital

Today the towpath seems completely litter-free; not how it used to be. Now you have garish graffiti that is a lot harder to shift than litter.

“It’s the first time in my life I’ve held down a job for fourteen years. Everybody is happy: ‘Hi, James.’ And I have no idea who they are. I used to squat in the 1980s, and sometimes you could be there for one or two years. They’ve blocked all that now. You can’t squat in a house anymore, so now they’re squatting on the canal. The government has to build a lot of houses, because from here all the way down to Limehouse there are squatters.”

James Harris was born in what was then British Guyana in 1968.

“My Mum was half-native Guyanan and half-Spanish or Portuguese. My father was half-black and half-Scottish. I didn’t see much of my dad. And my mum had some kind of trouble so I was adopted by the Baileys. These people were well-off and they always had some kind of missionaries living there. The house was very elegant, right on the edge of the river. The old lady died and I was left with the old man. Then he died and my mother came back when I was nine and I moved with her back to Linden McKenzie in Guyana.”

I see you lot coming out of Primrose Hill Books with the Man Booker longlist. Well, enjoy your read. But have a think. During the 1930s Guyana was Booker Guyana. Why was that? Sugar. That’s what. Bookers owned all the sugar plantations in Guyana.

John Berger went some way to explain this in his acceptance speech of the Booker Prize for G:

I went on X Factor twice. But you never get to the stage when you get on TV. I think that’s a scam. I think they already know who the winners are before they even start.

“I intend to share the prize with those West Indians in and from the Caribbean who are fighting to put an end to their exploitation. The London-based Black Panther movement has arisen out of the bones of what Bookers and other companies have created in the Caribbean; because, through their Black People’s Information Centre, they have links with the struggle in Guyana, the seat of Booker McConnell’s wealth.”

There is however one glimpse of light in the Booker slavery story: Jock Campbell. Jock went to British Guyana for the first time to take charge of the family Booker estates, in 1934. Later he would say that by acquiring estates through foreclosure, his ancestors became de facto slave-owners. Campbell himself abhorred slavery, and it was in fact the urge to make good the misdeeds of his own family that was the catalyst for his own reformist ideals.

As the son of the estate owner, Jock had enormous influence in spite of his youth and soon embarked on a mission of reform, and this became his life work. On 5 May 1971, in the House of Lords, Jock – now Baron Campbell of Eskan – dissociated himself from his ancestors, arguing that ‘maximising profits cannot and should not be the sole purpose, or even the primary purpose, of business’.

Eighteen-year-old James Harris was not much interested in politics. He was into music and girls. He earned a living clearing jungle for the bauxite factory.

“A few of us would camp out there clearing the jungle. You’d think it would be dangerous and there were plenty of snakes – they were the worst – but they kept away from people and we always had a fire. But I also loved music. I played in bands and I met this girl. She came to visit her family. I loved her and we got married in 1979 and came over and lived in Harrow Road.”

“In 1987 I was busking in Oxford Circus. Those days, in a couple of hours you could make £130. Then the Underground police charged you. You’d go to court and they’d fine you £10. You’d pay, then you’d go back to busking. Part of the cost of the job. Then one day a guy came round and said, ‘You’ve got a really good voice.’ He put me in touch with the drummer of Simple Minds, a guy called Cecil Raynor. We recorded two or three really good songs. Then this guy made a film called Sammy and Rosie Get Laid. They needed a busker, and I auditioned. They made the film under the flyover at Notting Hill Gate.”

In around 2002, the whole music system changed. Instead of busking and getting a £10 fine, they made it legal.

“Apart from the busking there was doing a demo. You could print 500 records and take them around to different record shops, ten here and ten there. It used to be £6 for a record. Now it’s 65p on iTunes. I went on X Factor twice. But you never get to the stage when you get on TV. I think that’s a scam. I think they already know who the winners are before they even start. At the moment I’ve got three tracks on iTunes.”

Then in 2002 something happened that changed James’s life.

“Music and drugs went together. Cocaine is not cheap. All my friends and top musicians were making a hell of a lot of money and we were all taking the stuff. Then, I don’t know how, but I fell from a very tall building on Notting Hill Gate. I woke up six weeks later in Hammersmith Hospital. It was something to do with girls and cocaine. To be honest, I’ve no idea what happened. I don’t see the girls any more. Nowadays I don’t touch cocaine because of the stuff they put in it. They must have put something in it that day. Why would you want to jump out of a bloody tall building? I survived.”

“I used to have a sharps bag and it would fill up in two weeks. Now there are not that many needles. Now the users can trade in the needles and get new ones. Believe me, there are trucks coming in here from Calais and they are full of drugs. So what do you expect?”

The Mole on the Hill