Phil Reavey – The Master Carpenter who Scored a Goal at Wembley 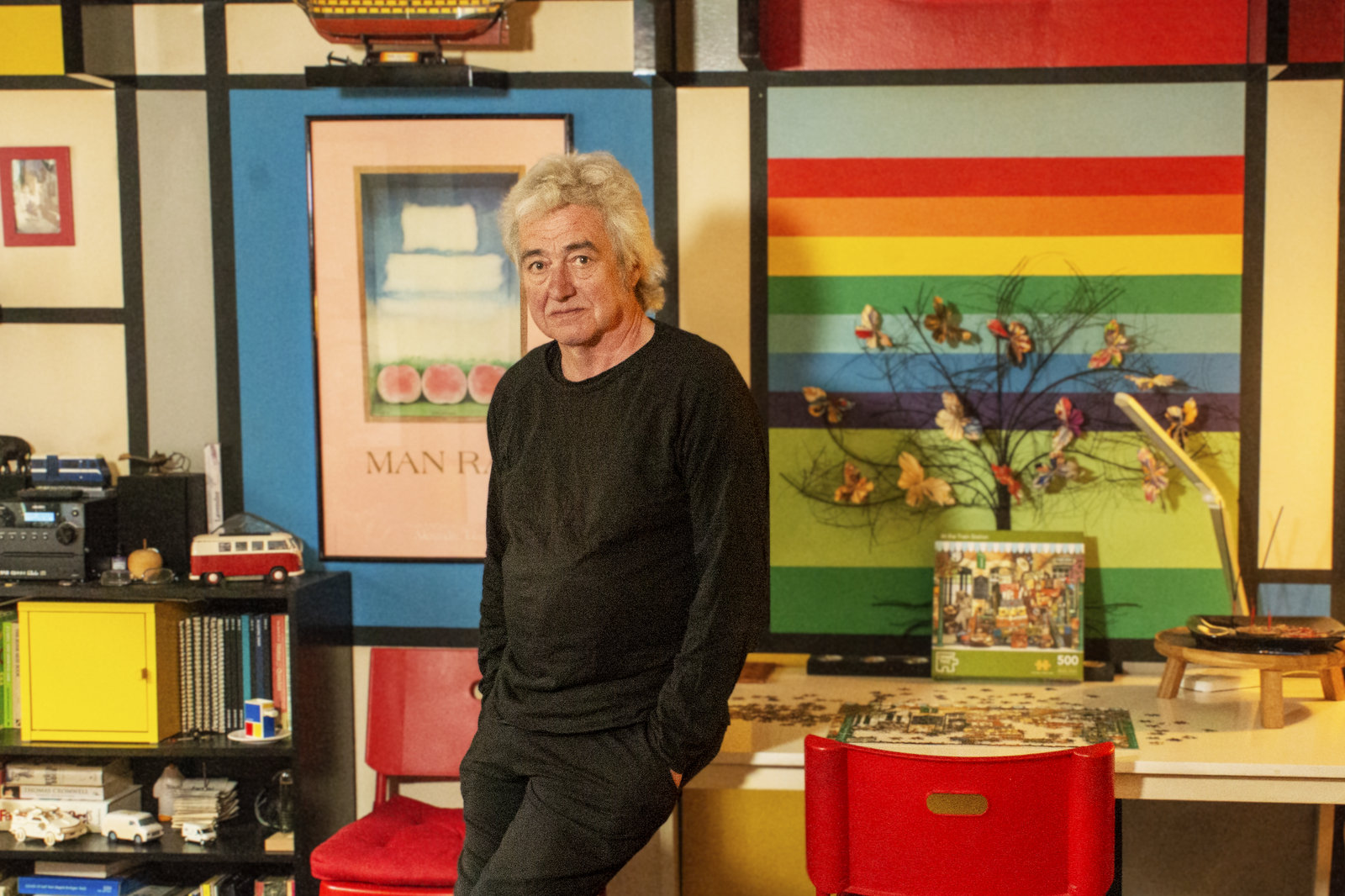 By The Mole on The Hill.

Grandad, what did you do during lockdown?
Not a lot, lass. Just kept looking around, observing like. See that window down there, in Oldfield. In there you can see all kinds of models. The man who lives there, he’s a master carpenter and he spent lockdown making those models.
Is he a nice man, Grandad?
Oh aye. Do anything for anyone. He’s one of the best volunteers in Primrose Hill.
That man is Phil Reavey, age 71, who has lived in Primrose Hill for over thirty years and at Oldfield for ten.

Phil Reavey was born in Manchester, then moved to Birmingham in his early teens to finish his education. Was that a success? Depends how you look at it. One O Level for Woodwork is hardly a triumph, but he did acquire a deep love of theatre, which was the making of him.

“When I was at school in Birmingham it wasn’t so good, but I got on very well with my art teacher; him and the headmaster were into amateur dramatics and they took me along. I worked on the scenery and set, and they did the acting. It was strange seeing the headmaster in this new light. We had a different relationship in the theatre. First names. I remember they were doing The Crucible and he was the Prosecutor. I loved it there and I knew it was what I wanted to do.”

After that experience in Birmingham, Phil was determined he would work in the theatre; he went to Salisbury Playhouse and more or less refused to leave until they offered him a job at six bob a week. “I was the chief cook and bottle-washer there. In the mornings I’d get the boiler going, make the tea and help with anything that needed doing. In the afternoons I’d be in the workshop making the scenery. Remember, it was a rep company, so we’d have three shows going in a week. In the evenings I’d set up the show, put the props out, help the electrician.”

From Salisbury, Phil moved to London, working on various shows as stagehand. It was all word of mouth. There was a pub where the stagehands met and heard about which shows were coming up. Each move meant more money: the Watford Palace, the Liverpool Playhouse, the Glasgow Citizens’ Theatre, and then on to The Old Vic where he was not only a set-builder but day-man. For this he did have an interview. He’d heard they were looking for people so he went along and asked if anything was going. One of his jobs was to stand in the wings and tap Laurence Olivier on the shoulder when he was due to go on. Except that one matinee Olivier wasn’t there and Phil had to dash to number one dressing room, haul the great man out and get him on stage, just in time.

“I loved it at The Vic. This was the time they were building the National Theatre and I was one of six stagehands responsible for the move. It was a bit chaotic: industrial action, the revolve not working. By this time I was a master carpenter and in charge of a crew, so I was management and not affected by the strike. The money was good and we worked a complicated system that gave us time to work on corporate events that were just getting big. I would get a crew together and send them off; then I realised I was working as an agent, so I decided to go into it full-time.”

Once he’d left the theatre, Phil became a freelance carpenter for numerous conferences, exhibitions and trade shows. His work took him across Europe and to Australia and South Africa. Looking back, he picks out significant moments.

It was while he was at The Open Space in Tottenham Court Road that he got arrested: “We were showing Andy Warhol’s film Flesh. It featured nudity and an erect penis, but Thelma Holt had run it past John Trevelyan, the film censor, and he said it would be all right if we made ourselves into a film club. Sounds OK, except that one night a load of coppers came storming down the stairs: house lights on, ‘You’re nicked’, and we’re all in Albany Street nick. I’d managed to give Thelma a call, and at about one in the morning she arrived with John Trevelyan in his dressing gown and pyjamas, and John Mortimer. It took them about twenty minutes to get us out. In the end we were fined £20 for having the handrails too low. Didn’t matter though; in two days we had another copy of the film and we ran it for another four weeks.”

One of the highlights of Phil’s career was Cats, where he installed what was then the biggest revolve. It was considered pioneering, with a section of the stalls mounted onto the revolve. There was also Evita, Tell Me on a Sunday and Jesus Christ Superstar; and then there was Live Aid at Wembley Stadium.

“Live Aid was brilliant. It was so relaxed. I was in charge of the revolve, the biggest in Europe, which was in pieces in a Blackfriars warehouse. We had five days to set up, and before they put the tarp over the pitch the scaffolders played the stagehands at football. We made sure everyone scored a goal.

“The revolve was in three segments: one in front of the audience with the band that was performing, one to the left where a band was leaving, and one to the right where the next band was getting ready. Every 17 minutes 47 seconds I had to press a button and turn the revolve. Before I did that I had to hear three whistles to let me know all was clear. If there’d been fingers or cables in the way, they would have been trashed. Backstage they’d built a replica of the Hard Rock Café for the musicians and I had a pass. It was like being in Madame Tussaud’s, except that all the stars were moving and talking.”

In the mid-seventies Phil got a call from Joe Aveline: he’d worked with him at the National Theatre, and now he was asking if he’d be interested in becoming operations manager at the ICA. There, on one memorable night, he played Omar Sharif at backgammon.
“Sir Roland Penrose, who founded the ICA, decided to have a backgammon fundraiser. He invited all his famous friends, including Omar Sharif. Players paid £250 to be part of a round-robin, where everyone played everyone else. At one point Omar didn’t have a partner, so Muggins was nominated to play him. I let him win, of course.”

There were some exhibitions that raised eyebrows: the ‘Dirty Nappy’ exhibition (officially Mary Kelly’s Post Partum Document of 1976), for example, which had framed dirty nappies with notes that described what the child had been eating; and the White on White exhibition, which was simply picture after picture that were, well, white. One day a complaint was made by one of the artists that his picture had been hung upside down. Phil is not aware of how that was resolved.

At the Man Ray exhibition, one piece entitled Obstruction consisted of carefully balanced and interconnected coat-hangers hanging from the ceiling. Later, the piece was given to Sir Roland Penrose. His son, Anthony, discovered the hangers in an attic after his death: “We found this cardboard box of lovely coat-hangers so we started to use them. We did so for many years. But I could never understand why they all had holes drilled in them. Suddenly one day the penny dropped. So I had to go around all our cupboards picking them out, reassembling them.”

Which brings us to the big question: Is it art? You might well ask. Are the coat-hangers artistically dangling from the ceiling of Phil’s flat an ‘homage’ to Man Ray? Or maybe they are the same coat-hangers that Man Ray used? And would there be any difference if they are? And what about the walls of Phil’s flat? Are the brightly coloured rectangles bordered in black any different from Mondrian’s Math Lesson Plan? If Phil opened his flat to the public and charged £70 a visit with a gin and tonic at £10, no doubt the visit would be considered immersive theatre. Answers, please, to the editor.

Grandad, is it true that Mr Reavey left school at fifteen with one O Level and then went on to be the best stagehand ever and travelled all over the world and earned lots of money?
Aye, lass, that’s right.
Then why does the government make kids spend all their time doing tests and getting ready for tests? I think they should be singing and dancing and learning to do art and acting, and then they could leave school and have a wonderful time like Mr Reavey.
You might be right there, love.