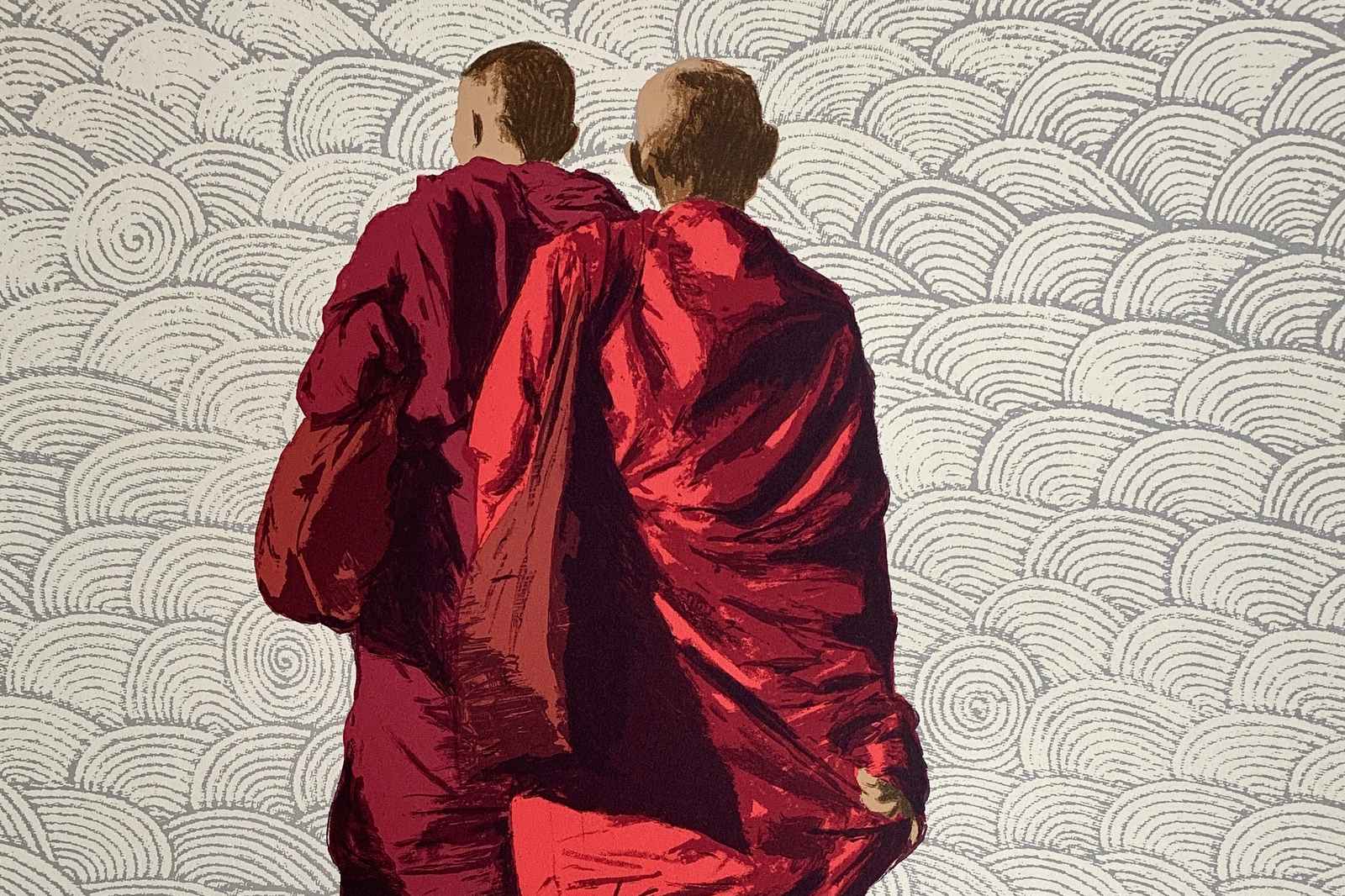 A Series of Images by Natasha Kumar

“I have seen a celestial paradise on a clear night. I saw it from the roof of the world. And in the morning, among sublime peaks that rose from mist-filled valleys, I watched monks play cricket and pray for enlightenment.”

Local artist Natasha Kumar’s latest collection was born of that moment in the Indian Himalaya. Tawang, or Galden Namgey Lhatse, the world’s second-largest Buddhist monastery, translates as ‘celestial paradise on a clear night’. Close to the contentious, high border of Arunachal Pradesh where China and India collide, it is where the Dalai Lama found refuge, fleeing the Communist occupation of Tibet in 1959.

But it was not the drama of the setting, nor the cricket itself, that provided Natasha with her inspiration. For all their maroon robes and yak-wool shawls, the novice monks risking their ball to the abyss with every boundary could have been village boys. What made them different? What caught Natasha’s imagination to become the work’s point of departure was their journey; the path to enlightenment. Would they find it? How would they know? What would enlightenment feel like?

Natasha’s work explores those questions, each image an imagined snapshot on the journey, inflected through elements integral to Buddhist art, everyday life in the monastery, and its monks. Where to begin? With a prayer for the swift fulfilment of all wishes, a blessing for the young monk pursuing his destiny in the Pali (sacred text) series. Accompanying him is his patient tulku, an enlightened being who chooses to continue to reincarnate in order to help others achieve enlightenment. The motif of the Padma (lotus flower) series, floating above the murky waters of material attachment and physical desire, reminds our monk of his ultimate goal. A background of yellow to the lotus symbolises the meditation to transform pride into simplicity; of green, the transformation of envy into accomplishment.

But there are other journeys that our travelling monk motif takes us on, real but no less spiritual. In the Kunkuma (saffron) series, the monks’ shadows fall on a background of the cloth that wrapped the sacred Buddhist texts smuggled out of Tibet, after the Dalai Lama’s flight. His own journey to Tawang, over the Himalaya, leading the way for others, is recalled through the Seng ge (snow lion) series that adopts his personal insignia, a celestial snow lion with glowing yellow eyes and tiny white claws.

Political struggle continues on the high Tibetan plateau. With Third Pole, Natasha’s monks head into the fluid confusion of an uncertain geopolitical future. Climate crisis is melting the area’s glaciers, and China is damming the reservoir of fresh water shared across Asia, the largest outside the polar regions.