Christina Jansen: She Suffers from her Imagination 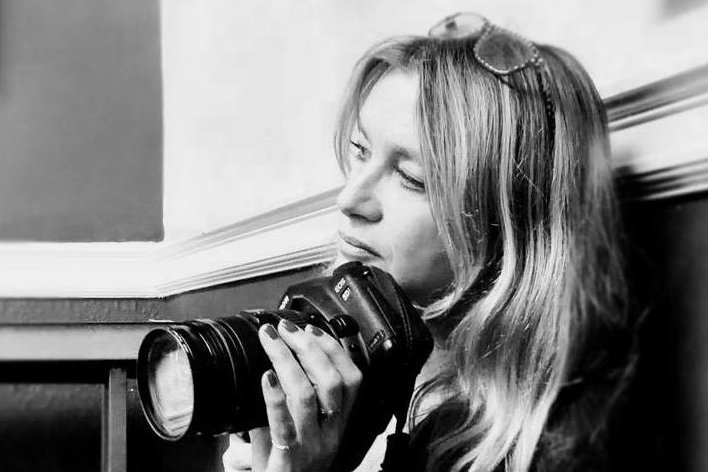 By The Mole on the Hill.

There was this woman a bit back and she took a photograph of a little girl with a backpack walking up the hill on a grassy track. Black and white. Could have been anywhere. But it was here, on the hill. Became famous, that picture.

That woman is Christina Jansen and you can see ‘Girl on the Hill’ hanging in Gary Ingham, a local hairdresser’s. Christina has lived in Primrose Hill since she was 24, starting off in Regent’s Park Road in a studio flat with the Sofer family, and then at various addresses until she settled in Ainger Road. Before that? Well now, there’s a story that starts in Amsterdam.

“My mother was from Liverpool 8, Toxteth. She was a very smart lady. She went over to Amsterdam and met my dad in a bar. He was one of Holland’s top photo-journalists, a brilliant photographer. She learnt fluent Dutch and became a successful writer/translator, writing Donald Duck stories for Disney.

“We lived for eight years in Amsterdam, next to Ajax football stadium. We were friends with Johan Cruyff, and lots of footballers came to our house. Then we moved to north Holland to a big traditional saddle-roof house next door to a farm where I was able to wander around. I milked the cows and even drove a tractor. I used to skate to school in winter along the canals. In summer we would cycle.”

All that ended when Christina was ten years old and she and her mother and brother came to live in England. Not to Liverpool but to south Devon, where her mother’s sister now lived in a big council estate.

“My Mum had had a job in a mental hospital, but she was also writing part-time for the Illustrated Press in Holland. She was quite eccentric, didn’t fit in to that environment, didn’t like doffing her hat to the gentry. She stood out. So we moved. One minute we were living in the flat polder-lands, then we found ourselves in the middle of Dartmoor three miles from the nearest village. I had to learn English fast. My mother joined a drama group and as a kid I was in lots of musicals with her. I used to get picked up in the mornings by taxi to go to King Edward VI School in Totnes.”

The school was perfect for Christina. She was excellent at sport, became a judo black belt, had ballet lessons in Dartmouth. But there was never any question about the direction she would take: it was always going to be art, so she did an Art Foundation course, followed by a BA Hons in Art and Photography, where she began making photo silkscreen prints and taking photos. Her father gave her a Canon TLB and Olympus Pen and she was on her way.

“My first job was for Hanley Museum in Stoke-on-Trent, photographing all the pre-1920s buildings for their archives. I remember walking along the canals and thinking, ‘I can’t believe this. I’m doing what I love doing and I’m being paid for it.’ Through photography I’ve been to the most extraordinary places and met the most amazing people. It has opened doors I thought I would never enter. My camera and I have been all over the place.”

It wasn’t all photography. Christina represented a famous jingle writer when she first arrived in London and this led to Zomba Music asking her to run their jingle company for TV and radio commercials.

“I didn’t know much about music, but I was good with people; I knew people in the music world, had a degree and didn’t look so bad. So I’d call clients and take them for lunch. For three years I ran the company by myself, but I never dropped photography entirely. I’d do album covers and publicity shots. Over the years I have shot everything from food to The Joy of Sex book covers, but portraiture, corporate and music photography are now my main focus.“

Christina is most proud of her work with Muhammad Ali: “One day I got a phone call: can you shoot this commercial? When I arrived at Fulham Studios I found Muhammad Ali making a commercial for a powdered milk drink he was marketing. I got on really well with him: he treated everyone with respect and was curious about them. It enabled me to get some warm, intimate photographs. I had a huge admiration for him and felt very protective because he was already suffering from Parkinson’s back in 1986. I hid my photographs of him – bar one – for 20 years until a girl in a Muslim gym in St John’s Wood asked if I had more pictures of the man and encouraged me to show them. The paparazzi turned up at that exhibition and I realised I could possibly raise money for charities Ali was interested in, using my photos.”

Ali’s seventieth birthday coincided with the 2012 Olympics, and Christina thought it would be wonderful to celebrate by showing 70 images of the champ taken by a range of photographers from around the world, including her own. She approached Lance Foreman, whose salmon smokehouse is on Fish Island overlooking the Olympic Stadium, with an art gallery upstairs. He was immediately hooked by a poem Ali had written for Christina:

‘To Tina from Muhammad Ali… Love is the net where hearts are caught like fish.’

Christina was told that Ali was not well enough to open the exhibition himself, but his brother Rahaman came with his wife. The exhibition, ‘In the Rings with Ali’, ran the whole way through the Olympics, raising money for Amnesty International and Parkinson’s UK. Christina is still showing the photos today, her modest way of trying to keep his spirit alive.

One of Christina’s most beautiful commissions came when she was pregnant with her daughter. She photographed many Primrose Hill locals for The Complete Guide to Pregnancy and Childcare, including several who were attending pregnancy yoga classes in Primrose Hill Community Centre. For Christina, the book is like a family album.

Christina describes herself as an artist photographer. She is an artist-in-residence at Gallery Different in Fitzrovia and regularly exhibits her work there. Besides her work in corporate photography, book illustration, album covers and shooting live bands, portraiture is her great love.

“I love people coming to my Primrose Hill studio. They always have a good time. They trust me and feel relaxed. You can see some of my portraits of local people on the walls of Greenberry Café… I’ve shot a live volcano from a helicopter, gold-smelting in Switzerland and all the tourist spots of northern Europe. But when it comes down to it, photography is about getting on with people, as well as lighting, composition and using your imagination.”

When she was very young, her mother overheard her Nan talking to a neighbour in Liverpool about her: “We’ve got a bit of trouble, y’know. Our Marion reads books. She suffers from her imagination.” No doubt this quality has been passed on.

Why have all those people got their heads bowed and their hands stuck out in front of them? Texting, Lass. They’ve swapped their brains for that thing in their hands. You watch. In a minute they’ll point it at something. They think they’re photographers. No chance. They’re taking pictures. Any mug can do that. It takes an artist to make a photograph.