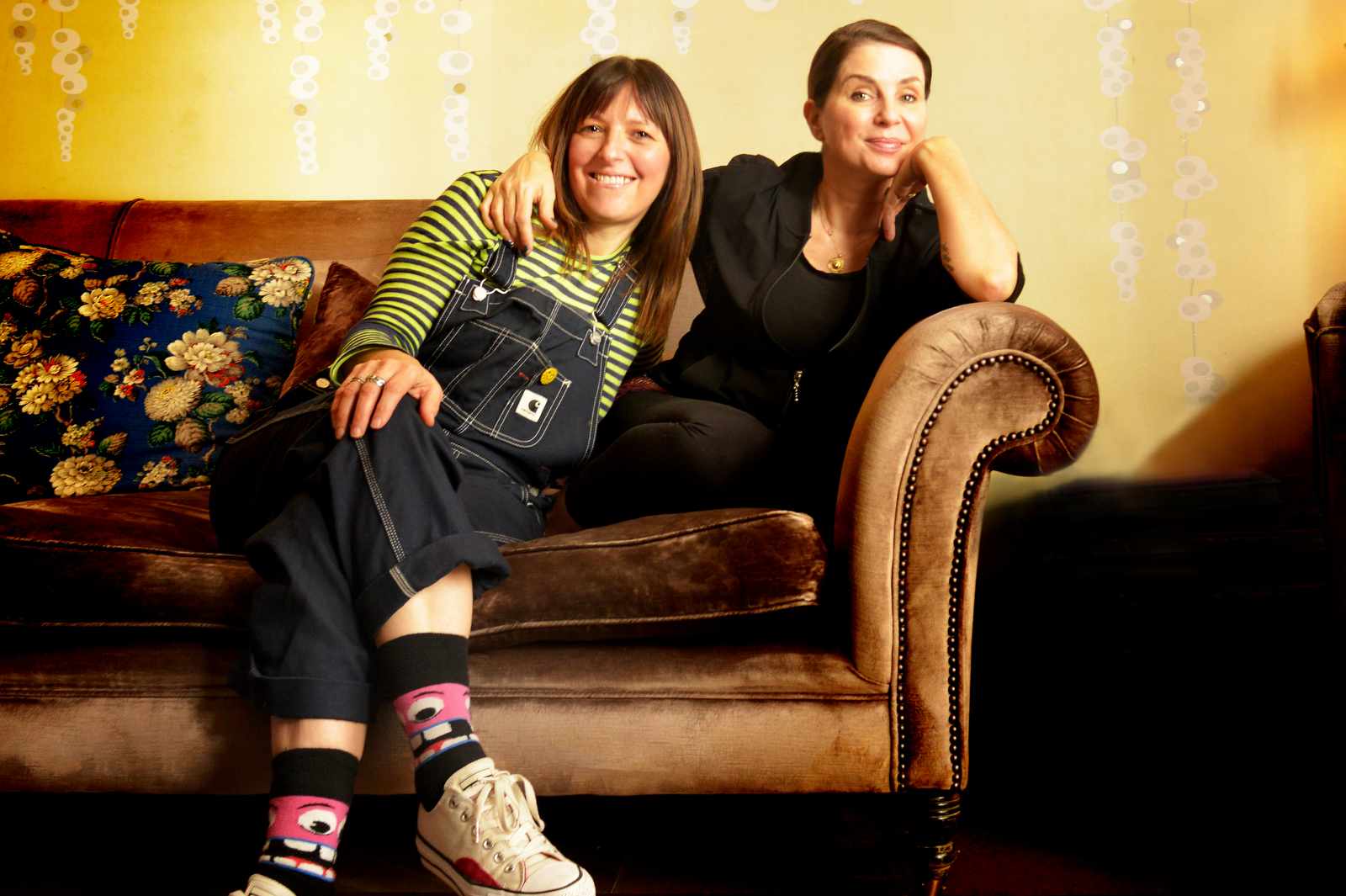 Sadie Frost and Frances Dove have joined forces on a collaborative project with En Shalla Food Bag charity, which aims to provide support for women’s groups in and around Marrakech.

The two women have been friends since their days at Hampstead Comprehensive, when it was an unusual, diverse and expressive school where originality was encouraged. They were young and creative girls (just look at them as young punks!) and they’re heartened to see that same creativity flourishing in today’s kids.

Sadie is well known for her links with Primrose Hill: Gloucester Avenue was her first home as a baby, and her family were known for their bohemian roots. Frances had the same creative background: her parents were designers, with a print room and jukebox in the house thanks to her record collector father. There was a huge warehouse adjoining their house in Dollis Hill where local artists met and created printed T-shirts, posters for the Labour Party and pottery. Hot Gossip and Ian Dury were among those who went to get their T-shirts printed with underground DIY labels.

Frances absorbed much of her early influences and has followed her father’s footsteps in silk screening. She has also launched her own company, White Dove, which is a fashion consultancy for sustainable projects.
Sadie has not only had her successful career in acting and producing, but also co-founded the fashion label Frost French and has created a sustainable yoga range, Frost London, which includes yoga mats inscribed with I AM LOVE and I AM PEACE. She also has a strong track record in charitable work.

Frances’s husband, Denis Murphy, works in collaboration with En Shalla bags, a project founded by Maryam and Daren Bonar. For the past four years, En Shalla have worked on a project embroidering food bags in the Marrakech area of Morocco. The food bags are recycled plastic bags that would originally have carried industrial quantities of rice, couscous, flour and other commodity foods. They are hand-embroidered by women’s groups in and around Marrakech, who weave different materials through the plastic.

Denis wanted to do something to help the women and empower them to have their own money. Some of these women, particularly in rural areas, are forbidden to go out without their husband’s consent, so this project means that the work can be taken to them. This enables the women to do something they enjoy and earn an income from it. Sadie was keen to be involved in another project like Frost French, which she started organically with a friend. So when Frances and Denis sounded her out to see if she would be interested in getting involved with their charity project, she didn’t hesitate and jumped on board. She saw the project as having huge positive potential.

They decided the way forward was to design the En Shalla bags with the statements of love and positivity from Sadie’s yoga mats: I AM LOVE, I AM PEACE. Many of the women hadn’t embroidered letters before, so they made grid-like charts for them to work from. The bag is turned inside out so that the original design can still be found on the inside.

The initial design for each bag is created in the En Shalla studio, where a group of artisans work for the company. Then the prototypes are taken to the villages outside the city and the design is reproduced by the Marrakech women. From a very early age, women in the area have always sewn and used their hands creatively. This is something they get satisfaction from, and the bags are a wonderful showcase for their skills.

The aim of the bags is to help educate people in and around the villages outside Marrakech. Part of the profits from the food bag project will be used to send a teacher to the villages, who will be able to give help with reading and writing. They see this as a fundamental aspect of life that everyone should have. Pens and paper will be provided, as they are often in short supply. The teachers will travel to the villages on specially designed Food Bag scooters.

Other improvements include direct financial compensation. When the women were ready to be paid for embroidering the bags, it used to be the husband or son who would turn up to collect the wages. But the charity told the men that they would only pay the person who had done the work, in this case the women.

Frances and Sadie have given their support and designs for free and they won’t be taking any money from the project. They aim to sell the bags for a reasonable sum to ensure that the women get paid well for their work. A percentage of profit from each bag will go towards ensuring the continuation of the project. The women will also benefit from the websites and social media accounts of Sadie and Frances, who are in a position to raise their profiles.

With this project we are just highlighting the women’s creativity and skill with their hands; they have amazing skill at doing crafts, but they don’t have the opportunity to take it further themselves.” They want these women to shine in their own right.

They hope this will be a stepping stone to further collaborations which will spread Sadie’s well-being message in other ways. Both women feel strongly about sustainability. “Don’t waste, create and educate” is their motto. Sadie says, “You have to talk the talk and live it. It’s part of my DNA. Sustainability has now also become a commodity, but that isn’t what this is about.” She is a firm believer in supporting the community and believes that we have to shop locally wherever we are. Referring to the many shops that have closed down locally, Sadie says, “It’s sad to take things out of communities. We’re all just living on coffee!”

Frances agrees: “Being online and in a digital world isn’t enough.” She has a Masters from the Royal College of Art where she studied sustainability, and she hopes that the drive towards sustainability and DIY will create change and be of benefit to the wider industry. She believes in “Small is beautiful” and quality. For future projects, she will be able to advise on printing techniques and utilise her print studio in Cromer, Norfolk. “We need sustainable alternatives in clothing. We have to chip away; every move towards it is important. With this project we are just highlighting the women’s creativity and skill with their hands; they have amazing skill at doing crafts, but they don’t have the opportunity to take it further themselves.” They want these women to shine in their own right.

The En Shalla Charity Bags will be launched at Melanie Press Boutique and are available from 12 April.