Burns Night at the Community Centre 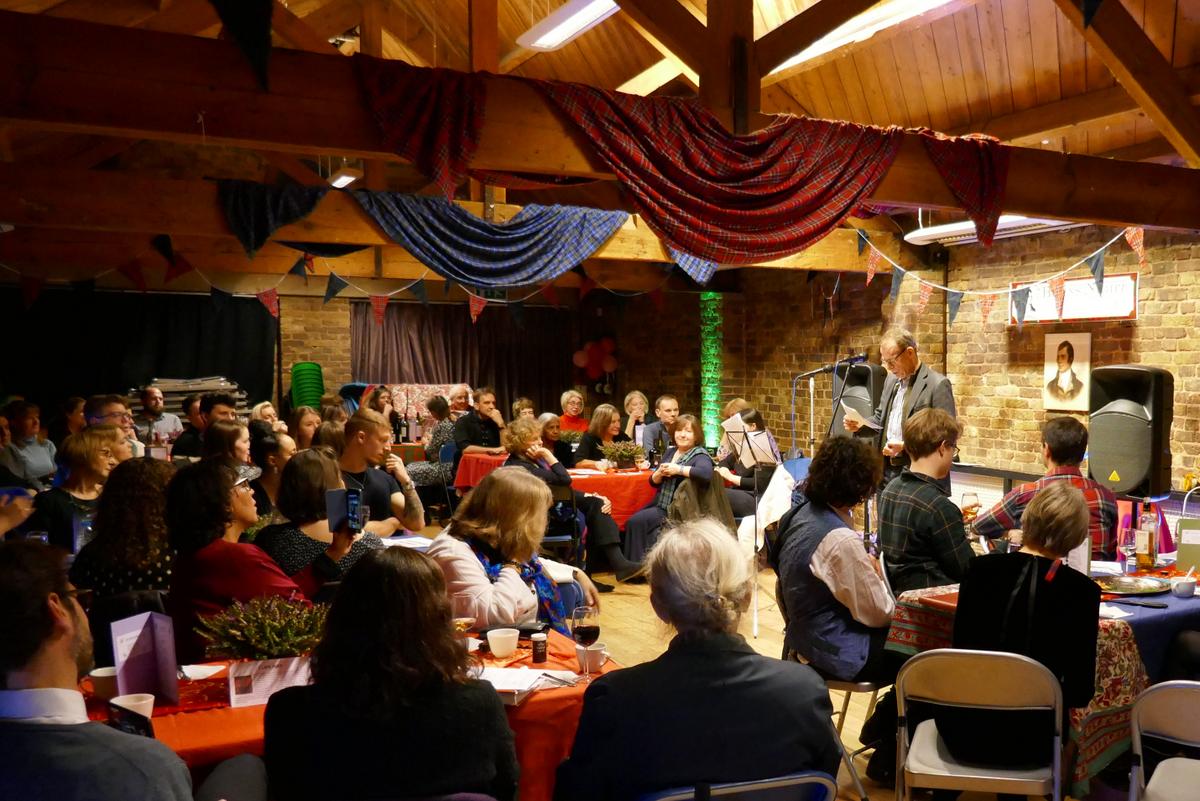 Aficionados of all things Scottish packed out a tartan-festooned Community Centre on the evening of 25 January to celebrate the birthday of legendary poet and lyricist Robert Burns. Guests arrived to a warm welcome of hot toddies and salmon canapes before settling in for a stellar evening of performances and ritual hosted by head clansperson Catherine Kelly. To set the scene for the night ahead, a reading of Burns’ ‘The Primrose’ was beautifully recited by local resident Catherine McQueen. Resident band The Jolly Beggars started their musical contribution to events with a rabble-rousing Scottish reel as an introduction to our very special guest, Andrew Marr.

Andrew’s dulcet tones were put to great effect describing The Immortal Memory through the poems ‘To A Louse’ and ‘Holy Willie’s Prayer’, guiding guests on a vivid journey through some of the key moments in Scottish history as seen through the eyes of the Bard. Interspersed with some of Burns’ most melodic songs, Andrew then peeled away the layers of legend that surround the great man to reveal the grittier aspects of his life and times. Guests seemed particularly fascinated to learn that Mr Burns had been profligate in many departments that excluded writing, having fathered at least 13 children that we know of at the time of going to print!

No Burns supper would be complete without making a bit of a fuss about a haggis, and this creature in question didn’t disappoint. The revered dish was magnificently piped into the venue by a very fetching Keith Thompson in full Highland regalia. The little critter was then addressed, cut and toasted in that order, before being served with traditional sides to a ravenous congregation of guests. It should be noted that no live haggis was harmed in the making of this event, and there were vegetarian options available!

After dinner James Hamilton took up the reins, reciting a piece on Burns that introduced a distinctly more international flavour to the proceedings: adding a ‘neighbourly nations’ interpretation of the Bard’s work and how far it has influenced people around the world.

Needing no introduction to Primrose Hill nor anywhere else, Annabel Leventon took to the stage and charmed everyone with her beautiful recital of ‘To a Mouse’, followed by stunning vocal performances of ‘Wild Mountain Thyme’ and ‘Comin’ Thro’ the Rye’, accompanied by her talented son Harry Adams on guitar.

The whisky flowed and the night continued as guests lapped up even more entertainment, thanks to Layla Brown’s touching a capella renditions of ‘Ae Fond Kiss’ and ‘Ay Waukin, O’.

In another plot twist, guests pondered the meaning of ‘I Murdered Hate’ and ‘The Vision’, recited and fascinatingly explained by Ian Bremner. Performance artist Francesco provided the penultimate act, bringing the evening to a crescendo with his intoxicating recipe of drumming and interpretive dance, while guests enjoyed the traditional Scottish dessert cranachan, skilfully concocted by Doro Marden.

A toast is a toast is a toast, and there were at least that many more to come for laddies, lassies and anyone else who wanted to propose one. As the night drew to a close, a happy gathering of our community danced to the closing songs, courtesy of The Jolly Beggars.

The Primrose Hill Burns Night raised over £850 for our Community Centre and has now become one of the hottest tickets in our local calendar, thanks in no small part to the volunteers who ran the show and the amazing performers who gave freely of their time and talents. Appreciation must also be extended to Shepherd Foods, who generously donated Gaelic goodies for the event.

My sporran is brushed and my sash is stashed, but I’m already looking forward to next year. Tickets for Burns Night 2021 will go on sale this December. Och Aye the Noo!

A Toast to the Lassies – By Phil Cowan

This is a toast to honour the 51% of the population who inhabit our wee world, and tonight in particular the shining lights who are the Primrose Hill lassies.

Lights the like of Pam White,
A venerable institution of conservation, film clubs, lectures and lamp posts
Who helps keep our community bright

Maggie Chambers, our revered editor of On The Hill,
Has steered our great magazine with love and skill

To Sue Bird, whose many talents include the Top of The Hill Quiz,
A Primrose Hill institution it certainly is

Nada Nutt, who seems to help at every event,
A nicer person I’ve never kent

And then there is the lovely Kay,
Whose wonderful smile always brightens up my day

Finally to our host this evening, Catherine Kelly,
Whose hard work, imagination and dedication
Made tonight happen and put food in your belly

Apologies to any lassies missed,
But this was always going to be an incomplete list!

Let’s raise a toast to the lassies!